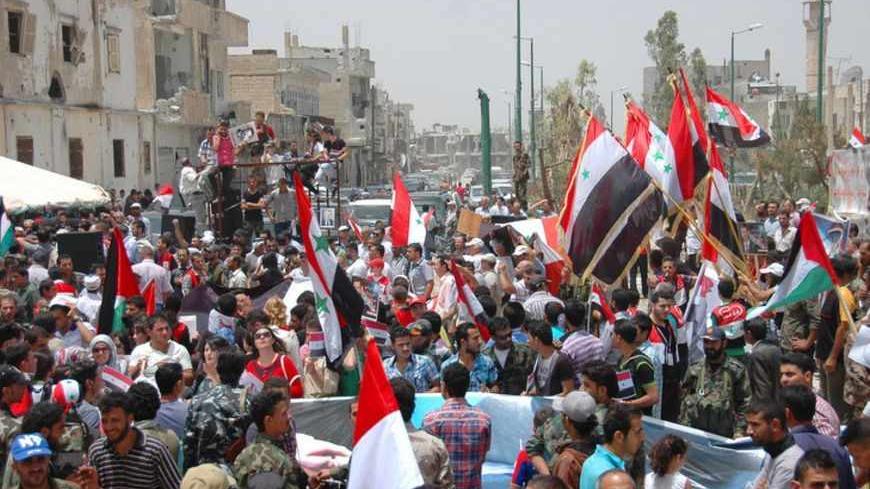 What influence does the Syrian army and Hezbollah’s control over the city of Qusair have on the Geneva II peace conference, which is expected to convene in July?

The Syrian regime is acting as if its military victory in Qusair has enhanced its winning cards in the political arena as well as on military ground, but the external opposition believes that Qusair is just one part in the ongoing struggle.

A Syrian pro-government MP, who spoke on condition of anonymity, told Al-Monitor in a phone interview on June 7 that the exaggeration of Qusair’s battle had given the Syrian government a strong position on military, political and popular levels, adding that the national army is experiencing high morale now.

When asked whether this victory will allow the regime to feel stronger and less willing to make concessions during Geneva II, the Syrian MP asserted that the leadership had announced conditions and that peace conference decisions would be subject to a referendum. He added that the regime will not make concessions and its supporters will not allow it to do so, since they have sacrificed thousands of “martyrs.”

Asked whether the political settlement means compromise and concessions from both sides, the Syrian MP stated, “The people will not accept seeing these opposition figures in Damascus, and they will not dare to come in after the Syrians' blood they have shed.” He said that if these oppositionists are confident in their popularity they should move to the rebel-controlled Syrian areas, and then they would set their conditions at the peace conference. He added, “Why don't they refer to the elections' ballot boxes?”

“Unlike the Syrian government, the opposition has in principle not decided on its participation in such a conference,” Gatilov said. “Another problem is that it has no vision about the makeup of its delegation,” he added.

However, the National Coordination Committee for Democratic Change in Syria (NCC), known as the Syrian internal opposition, told Al-Monitor that it will take part in the Geneva II conference. The secretary of the NCC's executive office, Rajaa al-Nasser, said in a phone interview on June 7 that his group will attend the conference because "we have a political vision and we believe that no one can win military in Syria.” He added that his movement has only one condition in its participation in Geneva II, which is that it should be based on a political solution and on the conference principles of Geneva I.

Nasser commented on Qusair’s battle, saying, “All sides have lost in the battle; and since the victims are all Syrians, no matter what side they belong to no one has won.” He added, “From the political perspective, one side winning one battle does not mean it has triumphed in the war. Today, we must seek a political solution, not a military victory; the regional and international balances would not allow a full victory for one of the parties.”

Nasser further pointed out, “If the hard-liners control the political mind, they will definitely affect the political spectrum. If some believe that the political solution is a real necessity to save Syria, then they must go to the Geneva II conference. But if they consider the conference as part of their conflict management or military battle, that would surely damage the peace process.”

When asked about external opposition claims that the NCC has a low presence in Syria, Nasser responded by saying, “Speaking on a political representation at this stage is not right and the political forces are not under scrutiny today. What is important now is that the forces would be able to find political solutions to save Syria.” He added, “Today, the NCC is a historical and original force. It is not a result of the current moment, since our roots run deep in Syrian society.”

A member of the Syrian National Council (SNC), the external opposition, who spoke on condition of anonymity, told Al-Monitor that Geneva II would be delayed until September, and during that period we may witness a change of military balance.

Ironically, this SNC member believes that there has been a change in Russia’s discourse in recent weeks because they have not cited Syrian President Bassar al-Assad in their speeches, which means they may not necessarily want a government with Assad as president.

The opposition source said they regretted not having made a deal with Russia earlier when the price was cheaper, indicating that Moscow is seeking economic and strategic interests in Syria, its last foothold in the Middle East. He hoped that the Iranian presidential elections would bring a reformist president — such as former President Mohammad Khatami — who may have a different approach toward the Syrian crisis.

Regarding the opposition divisions, the SNC member blamed the United States and Saudi Arabia for pressure to appoint their men to the National Coalition for Syrian Revolutionary and Opposition Forces, indicating that they support the independent opposition figure Michel Kilo who will weaken the Islamists, despite Kilo not having any influence in the Syrian streets.

It is worth noting that on June 8 Saudi newspaper Al-Hayat quoted sources as saying that the Supreme Kurdish committee will participate in Geneva II with a delegation headed by Saleh Muslim, president of the Kurdish Democratic Union, and that the opposition delegation would include two groups, one representing the SNC and the other representing the NCC and the National Democratic platform of Michel Kilo.