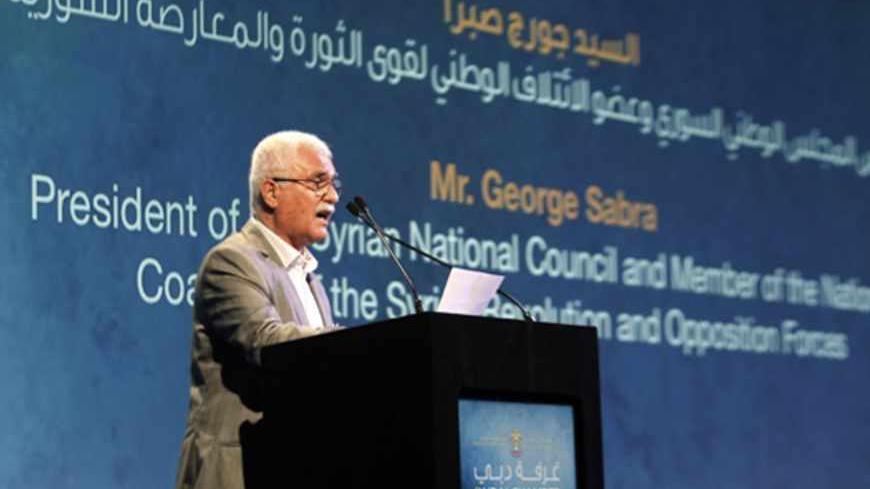 President of the Syrian National Council George Sabra speaks during a conference for the reconstruction of Syria, at Madinat Jumeirah in Dubai, Nov. 21, 2012. - REUTERS/Jumana El Heloueh

It seems that chances of the Geneva II conference succeeding have declined, following the statements of George Sabra, president of the National Coalition of Syrian Revolutionary and Opposition Forces, on May 29 that the coalition will not take part in this peace initiative so long as Iran and Lebanese Hezbollah are waging war alongside government forces in Syria. The coalition demands also that any negotiations with the regime of Syrian President Bashar al-Assad must lead to his resignation.

A quick response came on May 30 from Russian Foreign Minister Sergey Lavrov, who described the “coalition” demands as “impossible to fulfill” and accused them of seeking to disrupt the peace.

Saleh Mubarak, a member of the Syrian National Council, said in an interview with Al-Monitor that the opposition’s condition to take part in Geneva II is that "Assad and his ruling staff should not play any future role in Syria’s governance. Only the regime’s figures who were not involved in causing the people's bloodshed can participate.”

Saleh, an opposition Islamist figure based in Qatar, said it is highly likely that Geneva II would not convene, mostly because the opposition will not participate. Mubarak explained that the opposition has not decided yet, and is awaiting a response from Russia and the United States regarding its demands. He asserted that internal disputes within the coalition are not the reason for boycotting Geneva II.

Assad said in an interview with Hezbollah's Al-Manar TV station on May 30 that he has one condition for the Geneva II conference, which is that any agreement that may be reached would have to be approved by Syrians in a referendum.

Syrian Foreign Minister Walid al-Moallem said in an earlier television interview on May 29 that Assad will retain all of his powers until the adoption of a new constitution through a referendum. He stressed that any transition government agreed to at the conference would also be subject to a referendum before it starts its tasks. He insisted that Assad is the president of Syria, “from now until the next election in 2014."

Mubarak mocked Assad’s requirement of a referendum on a Geneva II outcome and asked who he would call for a referendum. "We have today hundreds of thousands killed and a devastated country,” adding that the matter is now over the issue of a referendum.

In addition, he said that Assad speaks as if “he won the battle.” He stated that there had been attempts at a political solution for more than a year and a half, but that Assad did not make any concession. He said, “If there will be a dialogue, it is not with the Assad regime, but with his masters in Moscow.”

Mubarak acknowledged the international pressure on the coalition to attend Geneva II, insisting that it will not participate without guarantees that the departure of Assad and his staff would be the outcome of the conference. He believed that the dispute between Russia and the United States is not about the departure of Assad, but is a precondition for the negotiations or as its result. He added that the two superpowers "have agreed to exclude Assad — maybe gradually or not entirely — and that the United States wants the new regime in Syria not to be hostile to Israel, and therefore wants to exclude the Islamists from its rule.”

When asked if the opposition coalition is hostile to Israel and refuses any normalization in its relations with Israel, Mubarak rejected this question and stressed, "All oppositionists are hostile to Israel, but we do not say that we will launch a war against them.”

Mubarak said that the National Coordination Committee for the Forces of Democratic Change, the main internal opposition headed by Hassan Abdel Azim, no longer holds any significant weight. He commented on Abdel Azim taking part in Geneva II by saying, “Let him make the deal he wants. It is worthless without the coalition and the National Council and other powers.”

However, the armed opposition forces have retreated to Qusair and the Damascus countryside, and Mubarak commented, "Maybe they did. But the battle has not been determined yet. Indeed, the resistance of the opposition in Qusair over the last two weeks has been legendary. And we hope that qualitative weapons are coming.”

Mubarak said that he hopes there will be a no-fly zone, preferring it to be handled by Turkey, which he trusts for its independent decisions, and not by the United States “that attempted to dominate the opposition’s decision and failed, so buried the National Council and is now trying to bury the coalition.”

He pointed out that violence is “not the opposition’s favorite choice but the regime forced them to it after six months of peaceful demonstrations.” He added that they are still looking for a solution that saves the blood of all Syrians and achieves its goal of a “free modern Syria.”

Latakia’s MP Ammar al-Assad told Al-Monitor that Assad's speech shows much of "his trust in his people and confidence of a victory after two years of war.”

Assad commented that the government will take part in the Geneva II conference, saying, "We will participate with a faithful intent and we hope that others will do so as well."

Asked about the opposition’s call for Assad's departure, he said, “The Syrian people will decide whether the president will go or stay.” He added that Assad's words express “absolute self-confidence and victory, and that the people's case turned into his favor, following the important military achievements on the ground.”

When asked about his assessment of the popular support for Assad, MP Assad claimed “it's around 75%.”

Nabil Fayyad, the founder of the Justice Party — a new secular Syrian party established in late 2012 that considers itself as part of the national internal opposition — said in a phone interview with Al-Monitor that Assad’s interview "came at a crucial period for Syria, especially after the victories achieved by the Syrian army against armed terrorist groups.”

He added, “President Assad was speaking with confidence and a sense of victory, and I found his speech today the strongest and most convincing since the beginning of the crisis on March 15, 2011."

Fayyad said he understood from Assad’s statements that "he does not build great hopes on the Geneva II conference. He pointed out that the opposition’s call for the president’s resignation to resolve the crisis “is an unacceptable condition for the pro-government forces.”

Fayyad asserted the importance of Assad’s focus on the opinion of the Syrian people for the country's future, and hoped that the Syrian leadership has adopted the democratic process. He accused the symbols of external opposition of "seeking money and positions, and they don’t want the democracy because it will reveal their weakness, since the Syrian people will not accept them due to what they did in Syria.”