The continuous flow of displaced Syrians into Lebanon throughout the civil war has served to bring attention to internally displaced Lebanese citizens, who lead similarly disaffected lives. 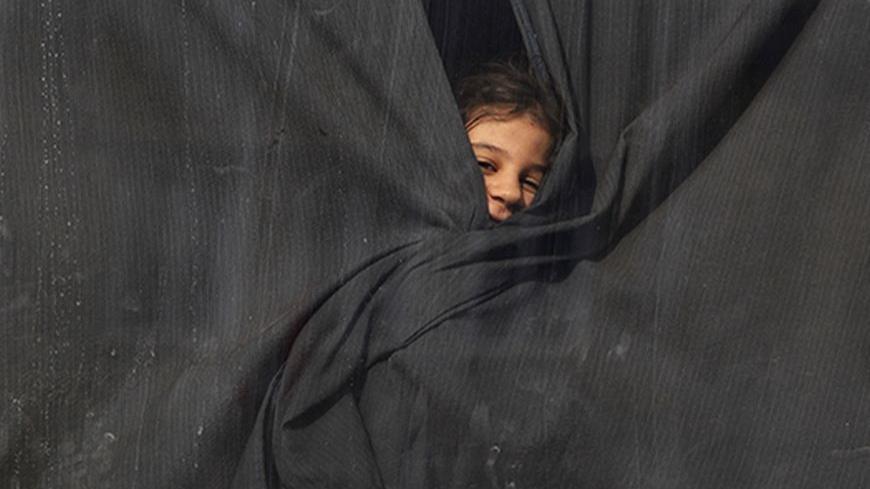 A Palestinian girl who had been living at Yarmouk Palestinian refugee camp in Syria looks out a bus window as the bus arrives at the Lebanese-Syrian border in al-Masnaa, Dec. 18, 2012. - REUTERS/Jamal Saidi

Walid H., who just turned 29, graduated from the Arts Institute of Music in Syria. Before his displacement to Lebanon six months ago, he used to live in the Mezzeh slums in Damascus. He does not know exactly who is responsible for his anguish, but lately he has grown fearful of everything that goes on in Syria. He is afraid of the opposition, which raises slogans either with or against the people, and he equally fears the regime, which has an exaggerated view of the security apparatus that works according to the theory of "guilty until proven innocent." One morning, he was awoken by the voice of the Lebanese singer Fairuz — whom all Syrians love to listen to in the morning. Suddenly, he decided to leave the nothingness that he owned in Syria and moved to Lebanon.

With only his identity card, his guitar, a nearly empty suitcase and 2,000 Syrian lira [$14.58], he left for Lebanon. In the evenings, he would use his suitcase as a pillow and slept on the sidewalks of Hamra Street in Beirut. Today, six months after his displacement, he has a room in the slums of the Ouzai neighborhood in Beirut’s southern suburbs. He said, “Nothing has changed. We are still the same: citizens of the Arab slums.”

His daily sustenance relies on $20 gathered from passersby on the high-end streets of Beirut for the music he plays as a beggar. Walid says, “The Lebanese don’t like music, but they have an unruly desire for consumption, and this is something I take advantage of.”

Rarely do Walid’s eyes meet those of the people giving him spare change for his music. He does not take his eyes off the strings of his guitar, while the passersby who place a couple of coins in his hat lying in front of him do not look at him, but at their fellow passersby.

Walid is a cultured displaced man who contemplates the world with sadness in his eyes. The passersby, as well as the Western and Arab organizations donating relief funds for Syrian refugees, do not know that Walid spends his nights in his room preparing music for the street symphony he will perform the following day. It is bitter irony for Walid that he has mastered the art of begging in return for his music.

Walid met a Lebanese girl who lives in a house near his room in the Ouzai slums, which are inhabited by poor Lebanese people who have been internally displaced. Fatima, 25, worked as a nurse in a hospital in the southern suburbs. A few weeks ago, she found herself out of a job along with several colleagues due to austerity measures imposed by the hospital’s management.

Fatima said that Walid is the first person she ever loved.  She believes that despite the misery he is in, the future has much in store for him and that he is a great artist. Fatima added that Walid’s art and her job as a nurse will allow them to raise a family. But this will not happen in Lebanon or Syria, but abroad. They are currently working on immigrating to a European country.

Walid and Fatima are not alone in this, an indication that displacement from Syria is but a sequel to the displacement of Lebanese in their own country.

Poverty, misery and life in the slums, as well as the decisions of Arab citizens to displace themselves are not only the result of wars, but also a consequence of the absence of economic and human development in their countries. While Walid is mustering his efforts to shift from being a displaced person in Lebanon to becoming a refugee immigrant in a European country, Fatima has decided to walk this road with him, not only because she loves him, but also because she is “displaced” in her own country, too.