As attacks against Hezbollah targets escalate in Lebanon, some within the party accuse Saudi Arabia of having a direct role in the violence. 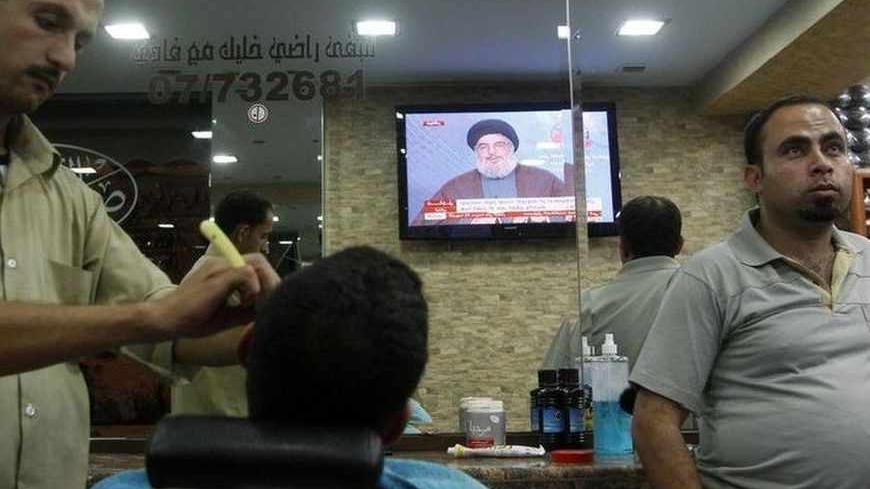 People in a barber shop watch Lebanon's Hezbollah leader Hassan Nasrallah on a television as he addresses his supporters during iftar, the breaking of fast meal, during the Islamic month of Ramadan in Sidon, southern Lebanon, July 24, 2013. Nasrallah said on Wednesday the European Union had given Israel justification to attack Lebanon by blacklisting the armed wing of his group, and would bear responsibility for any Israeli military action. - REUTERS/Ali Hashisho

Hezbollah and Lebanese security officials' fears have become reality during the past two weeks. The explosion that targeted the heart of Hezbollah’s most secure neighborhood and the bomb ambush of one of the party’s convoys along Chatoura Road leading to the Syrian border on July 16 embodied what had until recently been mere conjecture: the start of an open war against Hezbollah in Lebanon, with the aim of punishing the party for its involvement in the battle against the Syrian opposition in Qusair. Behind the scenes, it seems Hezbollah is hinting at Saudi Arabian involvement in these attacks, specifically accusing the director-general of Saudi intelligence, Bandar bin Sultan, who Hezbollah considers responsible for funding and conducting these attacks.

According to informed sources, the ruling family in Riyadh is suffering internal divides during this stage, linked to the ongoing conflict between the princes of the second generation, in full view of those of the first generation [sons of King Abdulaziz]. According to these sources, it seems that Prince Bandar bin Sultan is taking advantage of this reality to independently make the decision to implement a security agenda against Hezbollah in Lebanon. Furthermore, the climate of tension within ruling circles and among sheikhs in Saudi Arabia assisted him in this. These circles are experiencing high degrees of sectarian tensions with Hezbollah, and are demanding that the latter be punished for its public involvement in the Syrian regime's war against the opposition.

Despite the repeated blows lately suffered by Hezbollah, the battle is still in its infancy, and many hope it will not escalate to a wide-ranging and open war between Riyadh and the Syrian opposition on one end and Hezbollah and Iran on the other. On July 18, a newsflash from Bahrain stated that an explosive device had detonated near a Sunni mosque. If only theoretically and for the purpose of political analysis, one might infer that this incident was Iran’s counterpunch following its accusation that Riyadh was behind the attacks against Hezbollah in the last two weeks.

It is difficult to believe that the war against Hezbollah, if it were to endure, would remain confined to Lebanese soil. For the chaotic atmosphere that prevails in the region has rendered it easy prey for demographic, religious and sectarian cross-border reactions that spread from one country to another like an infectious plague.

According to sources from inside the party, it is too early to ascertain now how the ongoing war against Hezbollah will play out in Lebanon. But a party official, speaking on condition of anonymity, told Al-Monitor on Sunday July 21, that the latest targeting of Hezbollah’s neighborhoods and convoys indicated that the decision had been made to open a war against Hezbollah in Lebanon, and that this war would expand. The party was wagering on outside intervention to put an end to it, because its continuation would negatively affect Lebanon’s internationally sanctioned stability. But if intervention were not to occur, then the party would find itself compelled to respond with self-defense.

The words of this Hezbollah official seem to indicate that the party will not rush to react, and is hoping that these blows against it were only meant to convey a political message, no more. But if it turns out that the war is an open one, then the situation will grow much more dangerous, not only in Lebanon, but also in the Arab Gulf states adjacent to Hezbollah’s strategic ally, Iran.