Once an epicenter for Arab and Lebanese intellectuals, Beirut’s famous Hamra Street has in recent decades been transformed by consumption-oriented establishments. 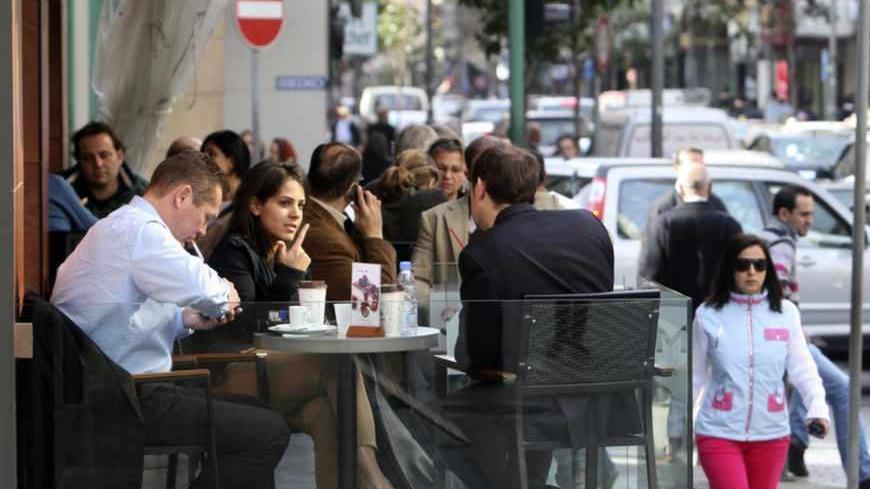 A few years back, a group of Beiruti intellectuals from different sects and areas gathered in Modka Cafe on Hamra Street to protest the owner’s decision to close the cafe due to financial hardship. They felt the decision would be harmful to the culture and memory of the place, which had served as a venue for major cultural events. They even called on the Lebanese Ministry of Culture to save the cafe. Eventually Modka was shut down, and the trend continued. Other cafes as culturally valuable as Modka shuttered their doors as well.

Modka Cafe opened in the 1960s, across the street from Wimpy Cafe, which has since closed for the same reason as Modka. Not far away, at the beginning of Hamra Street, stands the Horseshoe Cafe. It too attracted Arab intellectuals and opposition leaders spending years in exile in Beirut. Akram al-Hawrani was among those who frequented the establishment, as did many other Arab figures.

Over the course of 30 years, from 1960 until 1990, the cafes of Hamra Street became home to Lebanese and Arab journalists, politicians and artists, along with the intellectuals. In the aftermath of 1967, the year that witnessed the defeat of the Arab regimes at the hands of the Israeli military, Hamra's cafes were celebrated as clandestine "back rooms," in which the founding statements of Arab opposition parties were drafted and plans for coups d’état devised. When the offices of An-Nahar, considered the first liberal newspaper in the Arab world, moved to Hamra Street, the political and cultural character of the street was further elevated. Michel Abou Jaoude, a well-known An-Nahar columnist, later revealed that Yasser Arafat and his companions had gathered in his office during delicate periods in Fatah's history.

It was the francophone Lebanese political class that gave birth to the idea of Hamra Street in the 1950s. In Hamra they sought to reproduce Paris’ Champs-Élysées, whose sidewalk cafes attracted intellectuals from the four corners of the globe.

After the 1967 defeat, Lebanese General Security banned a play, Majdaloun, written by Henry Hamati and starring Nidal al-Ashkar, both of whom were affiliated with the secular, leftist Syrian Social Nationalist Party. In it, they sought to highlight the prelude to popular resistance emerging against Israel in response to 1967. Hamati and Ashkar defied the state and staged an open-air performance of the play in front of the Horseshoe Cafe. After that, Hamra Street's reputation was sealed as a meeting place for intellectuals and those opposing the official Arab systems.

At the beginning of the 1990s, however, Hamra Street fell victim to a tsunami that washed away its cultural cafes, the reasons for which are many. In one sense, the cafes served as indicators of current lifestyles and trends. In the case of Hamra Street, Lebanese consumption patterns changed, so instead of cafes catering to intellectuals, fast-food cafes took over, fulfilling the needs of a diminishing standard of living and a faster pace of life. In addition, Internet cafes became ubiquitous with the spread of electronic communication.

In the wake of such changes, intellectuals became cultural refugees, lacking public space to gather for leisurely discussions and exchanges. Their presence irked cafe owners seeking to reap the economic benefits from the quick turnover of customers.

Few of those who frequent Hamra Street notice that the intellectual character present at its emergence has disappeared. A quick shift came to pass, along with a change of identity and nature of the street. Hamra currently attracts youths eagerly frequenting the pubs there, where in addition to music and singing, alcohol is offered. It is also a place for male and female adolescents to meet. Nearby, cafes are filled with the smoke of water pipes that originated in Turkey and are currently all the rage in Lebanon.

Bilal Chararah (no relation), a poet, author and head of the Cultural Movement in Lebanon, which has headquarters in a number of Lebanese provinces, said that the cultural cafes are threatened with extinction. "We have begun to look for places outside Hamra, whose cafes used to welcome our culture," he told Al-Monitor. Chararah added, “I personally built a cottage in my village in which I write, read and invite intellectuals to hold discussions.”

Issam Abdullah, 65, a well-known colloquial poet, lamented to Al-Monitor, “I carry my culture as I carry the years of my life to the blood-testing laboratory. I have advanced in age, as has Hamra Street. It is afflicted with Alzheimer’s disease. It no longer remembers us, the intellectuals who built its cultural glory.”

Abdullah noted, “During the 1970s and 1980s, the cafes of Hamra were similar to the squares of Greece during the era of the philosophers. In Modka Cafe, political thinker Monah al-Soleh, revered journalist Michel Abou Jaoude and the wise Prime Minister Takieddin el-Solh used to gather around its tables. The adjacent Café de Paris was frequented by artists who honored Lebanon, such as Sabah, Shoushou — the father of Lebanese theater — and many others." He then asked and answered, “Where are they now? Some have died, and others will not find a place to receive them if they come to Hamra now.”

An owner of a newly opened cafe told Al-Monitor, “Honestly, the intellectuals cause losses for the cafe. They spend hours discussing things that do not interest me while their check amounts to nothing. They are generous with words, yet stingy with their bills.”

Youssef, the owner, is not even in his thirties. He has no knowledge of the intellectual vision that gave birth to Hamra Street in the 1950s and 1960s. To him, the intellectuals who made Hamra are merely “stingy lunatics.”