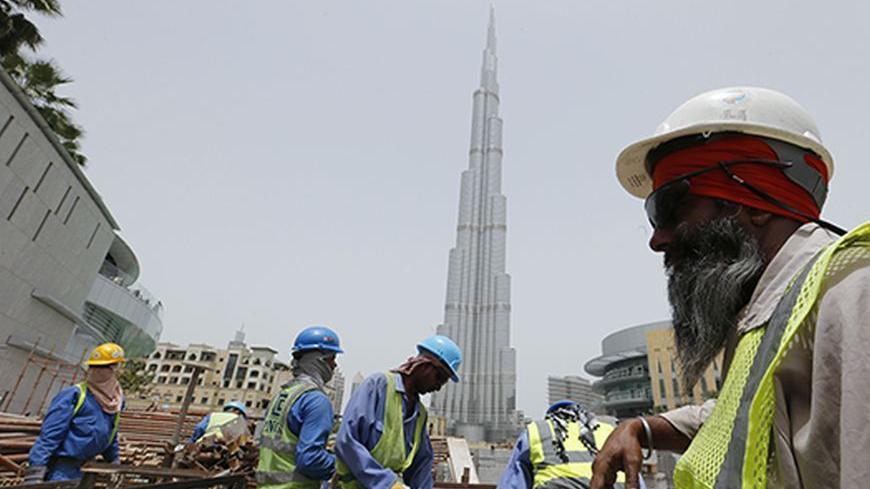 Laborers work near the Burj Khalifa, the tallest tower in the world, in Dubai, May 9, 2013. - REUTERS/Ahmed Jadallah
Gaith Abdulla
@gaith_ab
October 4, 2013

In a recent investigation by The Guardian detailing the abuse and exploitation of migrant workers in Qatar, the newspaper reported that dozens of Nepalese migrant laborers have died in recent weeks, tying the deaths construction work-related to Qatar's bid to host the 2022 World Cup.

This is not the first media report on the inhumane working and living conditions of these migrant workers. In January, The Guardian quoted a then-upcoming Human Rights Watch report describing the 2022 World Cup as "a crucible of exploitation and misery."

Media outlets often adopt a narrow lens in their coverage of Arab Gulf states, resulting in stories that — like their subjects — cause great sensation, but hinder a nuanced understanding of the dynamics of the region. Most notably, since the widely publicized debt crisis in Dubai, reporting by media outlets has drifted into a broader phenomenon of "Dubai-bashing."

While recent investigation and debate on Qatar's World Cup have commendably shifted attention to the issue of migrant workers' human rights, there is a need to refocus perceptions and terminology to better understand the position of Arab Gulf states. Understanding the dynamics that underpin such continued human rights abuses in the Arab Gulf states will help facilitate real change on labor and other issues. Otherwise, the most likely responses to charges will continue to be lip service, at best.

Arab Gulf states are not joined together in a conspiracy of emirs, sheikhs and sultans sucking the precious black water under their feet at the expense of an army of slaves. Framing the region's human rights landscape as a desert of exploitation and abuse creates unhelpful conceptions that detract from reality and alienate the leadership and people of the Gulf, who are notoriously sensitive to criticism.

If we group the six Arab Gulf states together in discussions of human rights, we must do so solely in recognition that they share sociocultural commonalities and form a regional political bloc, the Gulf Cooperation Council (GCC). This common regional framework means they have analogous political outlooks and are able to coordinate responses more effectively.

Our approach to the Gulf as a common subject of analysis is done through the wrong lens, which is skewed toward Western powers and their economic, strategic and security interests. This framework oversimplifies and manipulates sociopolitical structures to highlight the economic driving forces.

The picture of the human rights landscape in the Arab Gulf states is not one of pharaohs looking upon armies of slaves who are whipped toward the construction of colossi; it is more a picture of poor public administration exacerbated by a persistent culture of personality politics that continues to promote dependency on individuals as opposed to institutions.

The governments and leaders of the Gulf are rational actors, but remain relatively nascent political beings. They are trying to develop 21st century economies while simultaneously struggling with 20th century social and political issues. The roots of the problem are similar to those that are pervasive across the states and societies of the global south as well as, to a lesser extent, the Western world. These roots lie in weak communication channels, lack of transparency and inefficient bureaucratic governance.

The plight of migrant laborers in Qatar as well as the many other "invisibles" in the region, including domestic workers who face daily injustice behind closed doors, is a serious issue and must be viewed as such. But simplistic and unhelpful journalism which perpetuates stereotypes and is content to point its fingers at what it perceives to be oafish despots sitting over mountains of wealth, will never result in real progress.

Globally, every 15 seconds a worker dies from a work-related accident or disease. We still have a long way to go in addressing the needs and aspirations of the world's most vulnerable. The Arab Gulf states have an opportunity to create meaningful and lasting progress on the rights of migrant workers if they make concerted efforts to develop a common regional legal framework within a GCC setting that sets out clear definitions and parameters. This will act as a positive step toward empowering those most vulnerable in this global supply/demand chain, the migrant workers.

Gulf states must also recognize that this is a multifaceted issue that will require extensive research, planning and coordination as well as cooperation with international partners, including global civil society, multinational corporations and the workers' home states. They must first recognize all the dimensions involved and form a clear picture of the issues facing migrant workers from source to destination and beyond. Only with such an approach in mind can the alleviation of these concerns move past this cycle of sensationalism and lip service.

Gaith Abdulla is a Dubai-based writer and researcher. His work focuses on the societies and politics of the Arab Gulf states. On Twitter: @gaith_ab