Olive trees are a Palestinian national symbol, a fact acknowledged by Israeli settlers who continually seek to destroy them. 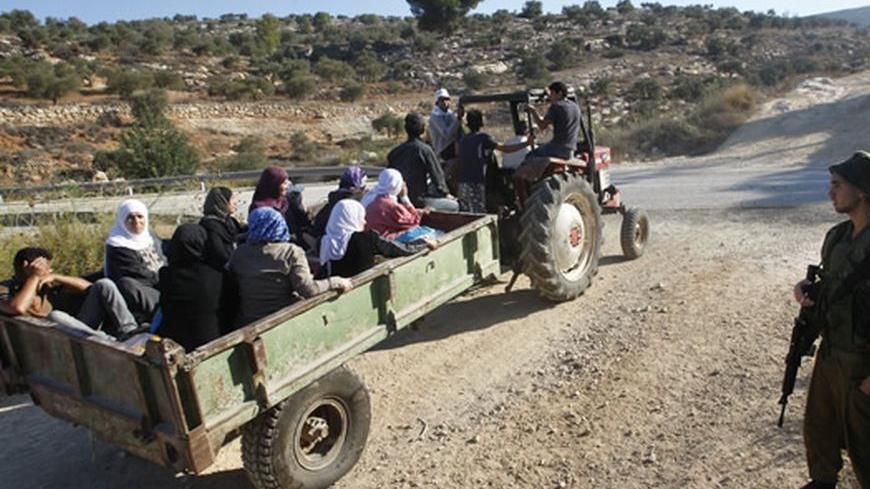 Palestinian farmers ride a tractor-drawn wagon past an Israeli soldier standing guard at an army gate, as they make their way to harvest olive trees on the outskirts of the West Bank village of Salem, near the Jewish settlement of Elone Moreh, east of Nablus, Oct. 3, 2011. - REUTERS/Abed Omar Qusini

The four-minute video and 13 photos posted on the website of the Palestine News Network tells the story vividly. Members of various diplomatic missions to Palestine joined Palestinians in picking olives.

The exercise was no simple picnic or an innocent act of voluntary work. It was another visible manifestation of the major problem of the Palestinian-Israeli conflict: the struggle for land.

Palestinian land outside built-up areas is most frequently planted with the evergreen olive tree. The trees require little upkeep during the year, and its fruits yield the popular olive oil, a major staple in Palestinian homes.

Olive trees, which have resembled a sign of peace since doves brought them back to Noah’s Ark, are in the forefront of the struggle between the Israeli occupiers and settlers on the one hand and the indigenous Palestinian population on the other. Nothing exhibits the Palestinian connection to the land more than these fruit-bearing trees. Olive trees are often inaccessible as a result of the Israeli wall built deep inside Palestinian territories or are unavailable to Palestinians as a result of barbed wire placed by Israeli troops under the pretext of an exaggerated security policy.

Olive trees also have an important legal status. Since a large part of the West Bank is rural and often void of specific land deeds, an old Ottoman ruling has become a precedent for Palestinians. The ruling states that he who repeatedly toils the land and uses it to cultivate fruit-bearing trees can use this continuous relationship with the land to make claim for disputed lands. This applies most to what is referred to as amire land or state land. Ruling powers take claim of any unclaimed or untilled land, highlighting the huge importance of who can show they are farming the land.

Palestinians complain that Israeli settlers cognizant of the social, legal and political importance of fruit-bearing trees have made destroying Palestinian olive trees their number one goal.

Settler actions against Palestinian lands vary from cutting down olive trees, uprooting them or setting them ablaze. Rarely a week goes by without news of a malicious act of destruction against the Palestinian national tree.

The latest participation by foreign diplomats upon an invitation from the negotiations department of the Palestine Liberation Organization (PLO) is seen as a statement regarding the Israeli settlement enterprise as a whole. PLO executive committee member Nabil Shaath, who heads the negotiations department, spoke at the olive-picking event — in the Beit Jala part of the Cremisan Monastery — of the need for more international effort to isolate Israel for its continued illegal settlement policies.

Shaath praised the European Union for its guidelines — which will be implemented in January 2014 — that will differentiate between settlements and Israeli locations within the state of Israel in terms of benefiting from EU funding.

Palestinians consider the historic act of olive picking part of their nonviolent popular struggle. Many schools in areas with a large number of olive trees close, so that entire families can join in on this national event. Olive presses work overtime during fall and newly developed export opportunities also benefit from years of abundant harvests.

Picking olives might seem to be a simple and nonthreatening act, but when it is conducted on lands that are threatened with Israeli expropriation or destructive acts by settlers, they become politically significant. It brings home the simple fact that 46 years of Israeli military occupation and the accompanying colonial settler presence are both unwanted strange elements in a land that had been quiet, serene and giving for millennia.