Palestinians are once again having to defend their own olive trees during harvesting season from Israeli settler vigilantism while Israeli soldiers stand by. 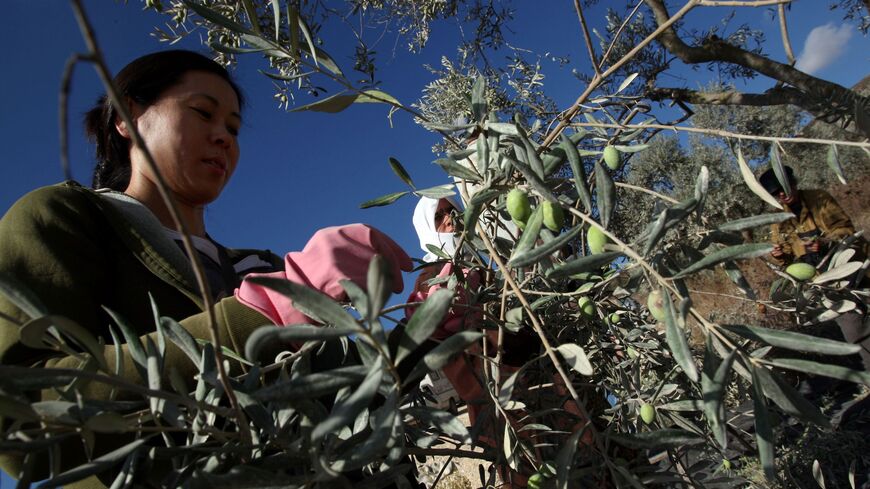 Japanese woman Keiko Sawada (L) volunteers with the Palestinian Oudi family, helping them harvest their olives on Nov. 13, 2007 near their village of Hawarra in the West Bank. - David Silverman/Getty Images

The struggle between Palestinians and Israeli settlers in the West Bank over land is often visually evident during the annual fall olive harvesting season. Land ownership outside major cities is often legitimized by fruit-bearing trees. Olives are used for oil, pickles, and even for making soap, all important features in the Palestinian economy. Palestinian landowners cannot do all the harvesting, so local and sometimes international volunteers offer help. In some school districts, students are given days off for the harvesting season. Palestinian university students are given voluntary credit hours for helping during this season.

However, Israeli settlers have annually used this season to try and disrupt the harvest, stealing the produce, cutting down trees, and even initiating fires. In recent years these crimes have been well documented — and the Israeli army either turns a blind eye or on some occasions joins the settlers.

The situation has become so difficult that UN special coordinator Tor Wennseland told the UN Security Council on Oct. 19 that along with the start of the olive harvesting season a week ago, settlers have been systematically destroying olive trees. “Reports say that settlers ruined 1,200 olive trees, and on Oct. 15, 40 settlers attacked Palestinians in the village of Yasouf north of Salfit in the West Bank causing the injury of a woman and three children,” Wennesland said.

Dana Mills, spokesperson for Peace Now, told Al-Monitor that her organization is shocked by the “exponential rise in settler violence, including the rise of attacks on person and property during harvest season, as well as consequent lack of law enforcement and retribution from Israeli authorities.” Peace Now, she said, is working on a new report on settler violence which will consider the attacks on olive groves, orchards, and other violence during harvest season. “Our activists will be joining a solidarity action and helping in the olive harvest later in the autumn.”

Dror Sadot, spokesperson for the Israeli human rights organization B’tselem, told Al-Monitor that settlers' violence toward Palestinians has long since become part of daily life in the West Bank. “Thousands of testimonies, videos, and reports, as well as many years of close monitoring by B’Tselem and other organizations, reveal that Israeli security forces not only allow settlers to harm Palestinians and their property as a matter of course — they often provide the perpetrators' escort and backup," he said. "In some cases, they even join in on the attack.”

Sadot told Al-Monitor that during the harvest season, the Israeli authorities claim that they will help Palestinian farmers but in reality, they don’t. “Violent actions of settlers against Palestinians are not exceptions to a rule. … Over time, this unchecked violence is gradually driving Palestinians from more and more locations in the West Bank, making it easier for the state to take over land and resources.”

Following the widely distributed videos showing Israeli soldiers’ lenience toward settlers, Benny Gantz, Israel’s defense minister, made a general statement opposing any violence against Palestinians and Israelis. But Israeli member of Knesset Sami Abu Shehadeh doubted that the Israeli government has the will to stop the settlers.

“If there was no political and military support to those racist individuals, these attacks would not have continued all this period," Abu Shehadeh told Arab News. "This protection is a green light enabling the continuation and the escalation of these barbaric attacks by the Jewish settlers.”

Anees Sweidan, deputy mayor of Nablus, told Al-Monitor that the Israeli army stopped an effort to help Palestinian landowners. Nablus had begun to pave parts of the road connecting areas east of the city with the village of Assera al-Shamieh to help Palestinians protect their land from settler assaults, but the Israeli army stopped them, saying that the road comes “too close to a military installation.”

The National Bureau for Defending the Land and Resisting Settlement launched the “Protectors of the Land” campaign, and the Agricultural Relief Committee also launched its annual volunteer campaign under the slogan, “We are with you to help farmers harvest olives in areas threatened by settlement and the apartheid wall in the West Bank.”

In response to the regular looting and arson attacks, Palestinians plant around 10,000 new olive trees in the West Bank each year, most of which are oil-producing varieties.