Iran’s Zarif on Nuclear Proposal: Secrecy Is Sign of Seriousness 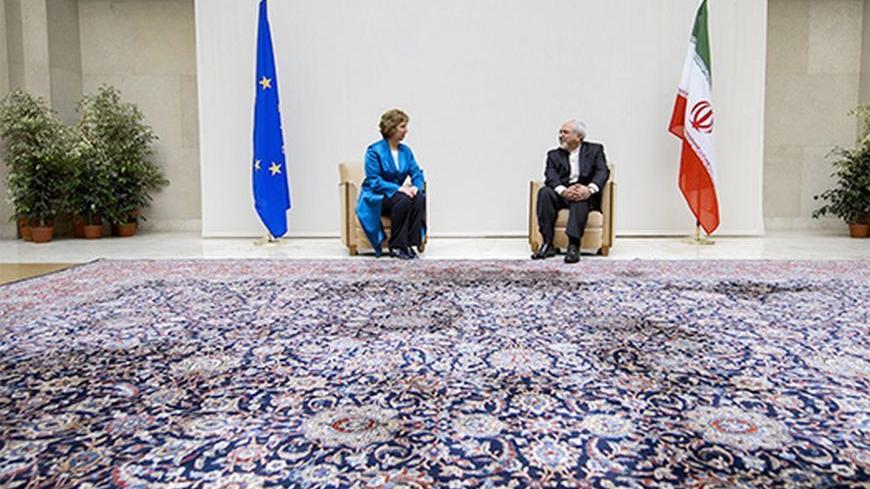 TEHRAN, Iran — Following the conclusion of the first nuclear talks between Iran and the P5+1 since the election of President Hassan Rouhani, buzz over the exact details of what transpired in Geneva is aplenty.

The exact contents of the Iranian proposal, formulated in a Powerpoint presentation titled, “Closing an Unnecessary Crisis, and Opening a New Horizon,” are unclear. However, reports have surfaced with purported details of the Iranian position.

Amid the reports, officials in Tehran involved in the nuclear negotiations remain adamant in their insistence that their proposal will remain under wraps pending an agreement.

In an interview with Al-Monitor, Iranian Foreign Minister and chief nuclear negotiator Mohammad Javad Zarif, referring to the reports about alleged details of the Iranian proposal, categorically denied their authenticity. “These are speculations that have little in common with reality,” he told Al-Monitor, maintaining his posture that “our refusal to unveil details of the proposal is a sign of our sincerity and seriousness.”

Asked about the anonymity of the source who claimed to have knowledge about the details of the Iranian proposal, Zarif said, “None of the officials involved in the nuclear negotiations speak off the record. We only speak on the record.”

Deputy Iranian Foreign Minister Majid Ravanchi, who participated in the nuclear talks — including the bilateral meeting with the American delegation — echoed Zarif’s remarks. In an interview with Al-Monitor, Ravanchi said, “What is in the media is pure speculation and detached from reality. We have said it in the past, and say it again: Our insistence on keeping our position secret is a sign of our seriousness.”

Hours after his interview with Al-Monitor, Zarif wrote in a post in Persian on his Facebook page: “Reliable sources for media have not seen the package themselves, and it’s best if they don’t tarnish their credibility with claims of knowledge of details of the proposal. … Keeping the [details] of the talks secret does not mean that we are afraid of revealing their contents. You can be sure of that we have no worries about making public what transpired in the negotiations. However, the goal of these negotiations [in our view] is to reach an understanding and not transient [media] victories.”

Zarif’s insistence that no member of his entourage speaks off the record came roughly a week after his much-publicized announcement that he would no longer speak in private. That declaration followed the newspaper Kayhan’s claim that Zarif had made negative remarks about the groundbreaking contact with the Americans in New York in a closed-door session with a parliamentary commission.

The debacle over the exact contents of the Iranian proposal surfaced amid seemingly positive reactions in Iran to the talks in Geneva. In an opinion poll published by the news agency ISNA on Friday, 75% of Iranians said they’re positive about the developments in the nuclear negotiations. Moreover, Asr-e-Iran has reported that initial results from the survey ordered by Rouhani to gauge public sentiment about Iran having a different relationship with America shows 80-90% of respondents are in favor of such a development. The positivity about what happened in Geneva has also been echoed by the representative of the leader to universities, who called the negotiations a “win” for Iran.

Considering the overall Iranian public sentiments about the talks, and the negotiating team’s posture, the question arises of who made the claims about the details of the Iranian proposal, and why.

On Friday, AP correspondent in Tehran Mehdi Fattahi tweeted, “Hard-liners have organized a rally, calling on [the] government to be ‘transparent’ and release full details of [the] talks with [the] P5+1.” Fattahi added that the organizers of the demonstration, which took place after Friday prayers at Tehran University, insisted that “the fact that US Secretary of State [John] Kerry didn't attend the talks means the ‘diplomacy of smile’ has failed.”

While signs point to potential spoilers being the source of the reports, some political analysts in Tehran suggest the story might be more twisted. Asked who might be behind an effort to create confusion about the content of the Iranian proposal, or present it as containing outsized concessions, one veteran observer in the Iranian capital speculated, “It is probably the work of sidelined figures who no longer have a say in the direction of the Iranian position.” The observer added, “These figures know how to use media and will continue to do so to achieve their aims. Zarif is insisting on secrecy to prevent this kind of sabotage in a more open fashion.”

Regardless of the origin of the alleged leak, the episode about the exact contents of the Iranian proposal suggests one important thing: Obstacles to progress in the nuclear negotiations lie not only in differences of opinion between Iran and the P5+1, but also within the capitals of the respective sides.

Mohammad Ali Shabani is a doctoral researcher at the School of Oriental and African Studies, University of London, and former editor of the Iranian Review of Foreign Affairs. He has worked in media organizations and think tanks in Iran. On Twitter: @mashabani