Although the Lebanese rejoiced at the deal that secured the release of nine Lebanese detainees in Syria, the details of the swap reveal the Lebanese state’s inefficiency in dealing with such matters. 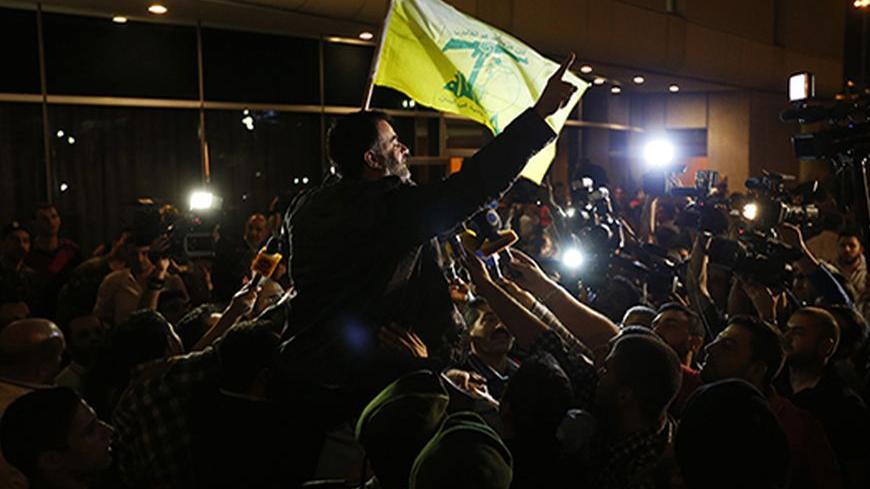 One of the nine newly released Lebanese hostages, who were held by rebels in northern Syria, carries a Hezbollah flag as he is welcomed by his relatives upon his arrival at Beirut international airport, Oct. 19, 2013. - REUTERS/Mohamed Azakir

The detainee swap deal between Turkey and Hezbollah has raised several questions, as to its timing and the role of the parties in the release process. Qatar's emergence in the role of mediator was surprising at first glance, for this had profound implications in terms of shifts and changes at the regional level.

This deal also underlined that there are influential forces beyond the Lebanese state, and revealed the flaws of this small nation, which appeared to have lost the prestige and sovereignty of its institutions — namely the judiciary and security apparatus.

First and foremost, the swap deal clearly showed that the conflicting parties in the Syrian arena were able to embark on the path of negotiations, if they had interests in this regard, and if they came to realize that there would be no change in the balance of power, at least in the short term.

Second, these external influential forces have a major impact on the warring factions and groups at home, which could be employed to pave the way for a balanced and rational settlement. These two observations suggest that negotiations are likely to be back on the table, while the option of a military confrontation is likely to be discarded. This is especially true since the plight of the Syrian people has become a tremendous human tragedy beyond description, and since it has turned out that there is no imminent change in the balance of power on the battlefield.

Moreover, the role of Qatar in the detainees' release — with the rational and pragmatic approval of both Turkey and Iran — enhance the chances of a return to negotiations.

Despite the attempts of some to portray the role of Qatar as a major shift in position, this role serves as the beginning of a new policy, which emerged with the arrival of Sheikh Tamim bin Hamad bin Khalifa Al Thani to power. Indeed, the actual change in Qatar is the arrival of a young president to the highest rank of power and the distance he took from jihadist organizations and the Muslim Brotherhood.

Thus, it was no surprise that this small nation has returned to the role of a mediator, which it has always taken up politically and economically, entrenching its diplomatic stance and enhancing its special position on the international level.

As for the repercussions of the abductees' swap deal on the Lebanese arena, one must first note the fact that all Lebanese — without any exception, whether inside the country or abroad — were overwhelmed with joy when the detainees were released and returned home.

Indeed, these kidnapping and counter-kidnapping operations have brought back to the mind of Lebanese the memory of the civil war, when such practices used to be the headlines of the absence of the rule of law and further proof of the prevalence of the rule of the jungle.

Nevertheless, the prisoners’ release held a deep sadness, for it showed once again the facts that had been once obliterated or have become part of the Lebanese routine and daily lives. They have learned their lessons the hard way, especially about the downside of applying the concept of “an eye for an eye and a tooth for a tooth,” which is in direct conflict with the principles of law and justice needed to build the state.

The scene of the released detainees reminded the people of the numbers of abductees in Syrian prisons, whose fate remained unknown, despite the endeavors of political leaders close to the Syrian regime who were trying to determine what happened to the kidnapped people.

Joseph Sader is among those kidnapped whose fate remains mysterious. Sader disappeared without a trace [on Feb. 13, 2009], after leaving his job at Beirut international airport. Moreover, one ought to mention the Italian priest, Father Paolo Dall'Oglio, who disappeared in the Syrian city of Raqqa.

What’s worse are the bitter lessons drawn by the Lebanese from these incidents, which were secretly whispered or even publicly declared among the Lebanese sympathetic toward the released prisoners and abductees. Some of those sympathizers have gone so far as to say that kidnappings ought to be met with counterkidnappings and that had it not been for the abduction of the two Turkish pilots, Azaz abductees would not have returned home.

But why did those detainees return, and not the two captive bishops and the rest of the journalists detained in Syria?

What makes the wound even deeper is this sense of political suppression, the double-standard policy, and the concept that there are some external influential forces prevailing over the rule of law.

Furthermore, the incapability of Lebanese security forces was clearly underlined when it turned out that the kidnapped Turkish men have been on Lebanese soil all along, and that the security agencies had failed to detect their location. The funny thing is that the two Turkish pilots were escorted to Beirut airport before the eyes of the Lebanese security apparatus.

What’s worse and what has sent the remainder of the state’s credibility down the drain is the release of those accused of kidnapping the two pilots, under a decision issued by the Lebanese judiciary. This raised questions about the independence and immunity of the judiciary to these influential external forces.

In a nutshell, the detainees have returned home, but the state was not behind their release. They were released as a result of the efforts of some influential forces and their regional sponsors. This has been carried out at the expense of the state’s credibility, along with that of the security and judicial institutions, i.e., the main components of its sovereignty.

The remarkable thing was that the returning heroes were received with partisan flags and banners that filled the streets, with the absence of the Lebanese flag. The released detainees returned to their sects, rather than their homeland, while the Lebanese state remains captive and the future of its citizens continues to be enchained.