The Hezbollah Question in Lebanon

As developments in Syria and elsewhere around the region continue, a look at the role Hezbollah plays in Lebanon is more pertinent than ever. 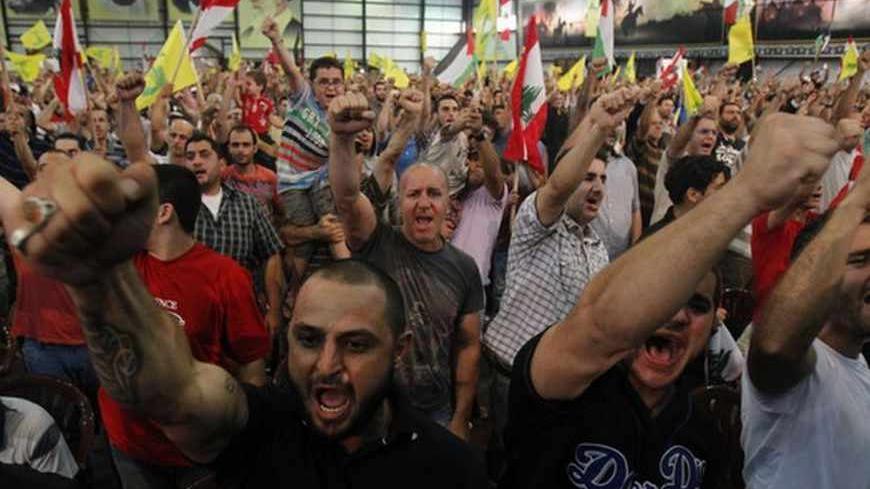 Hezbollah supporters react as they listen to their leader Sayyed Hassan Nasrallah, who delivered a rare in-person speech in Beirut, Aug. 2, 2013. - REUTERS/Sharif Karim

The situation in Lebanon is worrying. The central state is falling apart and its sovereign components are crumbling, while the republic’s institutions are becoming weaker.

Parliament suspended its sessions three months ago and contented itself with a renewal of its term. It has since entered a deep coma that has dragged on for months, but will probably resume activity in May 2014, when the next president is to be elected in accordance with the constitution. In this way, the parliament would be consecrating — by its show of hands — a deal that was prepared for it abroad to be carried out by its members, those who were entrusted with representing Lebanon’s different sects in the name of the people.

As for the government, it resigned nearly nearly six months ago, handling matters at the whim of ministers who are not held accountable for their actions.

The republic is hanging by a thread. It has lost all of its pillars except for its presidency, an institution characterized by the steadfastness of the person occupying the post, its unity and its limited capabilities. The country refuses to die, even if undermined by the de facto forces and restrained by regional conflicts.

The latest craze of the de facto forces comes in the form of what they have dubbed “self-security,” since these forces replaced the government in its foremost sovereign task — controlling security matters. They established barricades and checkpoints on roads and have not hesitated to investigate or even arrest people if needed, under the pretext of the government’s absence and impotence. All the while, they have ignored that they are the ones obstructing the establishment of the government. Perhaps the clearest reflection of this reality and of the solutions of replacement of the state with a small state is what we saw in the southern suburbs of Beirut recently, in the wake of the two bombings that hit Shiite areas, in Bir al-Abed and Roueiss.

Those two incidents were followed by the Tripoli bombing in a bloody series that reminded the Lebanese of the dark civil war and its tragedies, bringing back the lessons that have not been learned yet despite long years of war. Perhaps the most important of these lessons is that, in a society founded on pluralism, only a united government based on justice can guarantee security and stability. Moreover, any arms other than the state’s own legitimate ones constitute a threat to it, and ultimately, a threat to themselves.

In the past, Hezbollah’s pretext to keep its arms was the liberation of land from the Israeli occupation. However, after the withdrawal of the Israelis in 2000 — a unilateral decision — this pretext was no longer valid, and the Lebanese grew confused. The scheme in Shebaa farms and Kfarshouba hills, which the Lebanese suddenly discovered were part of their lands under Israeli occupation, even if the international law considered them Syrian, was not enough to clear up the clouds regarding the mission of these arms and their alignment with the logic of the state. Moreover, it is not enough today to raise voices, point fingers and repeat the three-part slogan “the people, the army and the resistance” to prove the legitimacy of Hezbollah’s arms. This is because the people are particularly divided on the role of the resistance and army and the relation between the two.

Numerous pretexts were given to defend Hezbollah’s arms and justify their persistence outside the state. For instance, it was said that they are essential to protect the oil in the depths of the ocean that were recently discovered. It was also said that they are of dire necessity in order to cover the resistance’s back in Syria. Also, as was circulated recently, they are the last resort in order to confront the takfiri projects flowing in from Syria. This declaration recognizes that Hezbollah’s work goes beyond Lebanon’s borders. The truth of the matter is that Hezbollah’s weapons are first and foremost for the party itself. They are legitimate, or rather “sacred” in the eyes of those who carry them. The dichotomy that exists between the weapons is simply the inevitable result of the dichotomy between the Lebanese state and that of the Hezbollah mini-state that exists within Lebanon, revealed by the sectarian dimensions of the war in Syria.

Weapons are widespread today in the streets of Beirut and are charged with preserving security in Beirut’s southern suburbs — in other words, the territory of the mini-state — after the state proved unable to do so, according to Hezbollah officials.

The existence of these weapons just goes to show that it is impossible to reconcile Hezbollah’s project — which is linked to the regime of the mullahs in Iran — and the project of the state. This is true at least according to the 1920 formula when the state of Greater Lebanon was conceived, embracing disparate sectarian groups and whose path was not devoid of crises and risks. If it is true that the state is not capable of maintaining security in Hezbollah’s areas, it is also true that Hezbollah is an obstacle to its establishment. It is a real contradiction. Dialogue, convened by the president of the country, failed to overcome this contradiction. The Lebanese have tried in vain to obscure and dodge this truth. The most dangerous part is that Hezbollah is trying once again to use force in order to impose its project, just like when it toppled the government led by Saad Hariri and brought Najib Mikati in under the pretext of warding off strife in June 2011.

Hezbollah is doing the very same thing today in Syria by supporting the Bashar al-Assad regime under the pretext of opposing a Western conspiracy and takfiri groups. It is also dangerous that Hezbollah’s opponents have been countering it with a similar retaliatory option, or in other words betting on a change in the regional equation to do away with a scheme backed by its group. It is also dangerous that the occurrence of groups taking security matters into their own hands here is countered by a self-security there, with the outbreak of “the leaders of the axis,” a phenomenon taking place in the north. Such practices are becoming acceptable, and even legitimate, by the popular basis, which are driven by the despair of establishing the state or the need to adhere to the forces of the status quo.

The logic of self-rule has gone beyond the matter of security to include other aspects of the state's role, such as building infrastructure networks. The recent dispute over the communications network Hezbollah is setting up across the Lebanon is simply the conclusive evidence that the mini-state is growing at the expense of the state.

The questions are: Is there a solution to this dilemma, especially with the growing hatred fueled by the ongoing war in Syria? Is there any possible settlement in the short term? Habitually, settlements in the small country come from abroad. Settlements may come from a room adjacent to the hall in which the Geneva II conference is held. It will be one settlement in two countries. Nevertheless, if it is impossible to achieve a settlement, the conflict will continue to be one in two countries, during which states will fall and mini-states will rise up.