Citizenship Ambassadors aims to bring together youths from Iraq's various religious and ethnic communities and regional affiliations to combat the escalating sectarian conflict in the country. 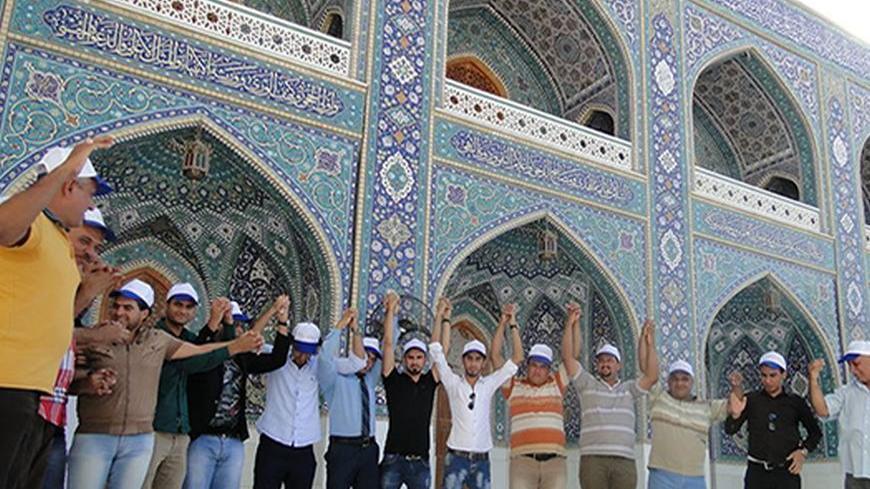 A group of “citizenship ambassadors” visit the Al-Kadhimiya holy shrine in the Kadhimayn suburb of Baghdad, Iraq, Sept. 20, 2013

While the Iraqi government seems to be in a coma when it comes to bridging the gaps between the different segments of Iraqi society, Iraqi youth volunteers have opened the doors of communication among themselves in an effort to develop a true sense of citizenship. These youths, who belong to different sects, groups and regions, became acquainted with one another during events held by the Masarat Institute, which promotes the protection of minorities.

They then continued to communicate and develop a broad network of cooperation spanning Iraq's various regions, while the Baghdad government remained only capable of convening ceremonial conferences. These youths call themselves Citizenship Ambassadors. Each one considers him- or herself to be an official representative of Iraqi citizenship and responsible for spreading a culture of co-existence across the Iraqi spectrum.

Included among these ambassadors are Zuhair, a Yazidi; Mona, a Bahai; Lara, a Christian; Insijam and Itifaq, Mandean twins; Ahmad, a Turkmen; Marouj, a Kurd; Hussein, a Shabak; Wissam and Wojoud, black Iraqis; Muhannad and Ahmad, from the southern provinces; and Seif from Anbar among many others. The members represent the majority of Iraq's various identities through their different nationalist, religious and regional affiliations. At the moment, the project includes 10 teams comprising 400 volunteers throughout Iraq.

The Citizenship Ambassadors aim to correct the stereotype of Iraqi society as divisive by personally getting to know one another and holding constructive discussions. Each participant forms a team of members from his or her province to create a comprehensive picture of Iraq's diversity, reflecting an objective picture of all the components of the country. They then gather at workshops, where they discuss the foundations and principles of citizenship. Each session ends with a visit to the holy places of a religion, so group members can become personally acquainted with them all and talk with their leaders. A session lasts a week and is followed by additional gatherings in which new members participate. This result is an expanding social network of relations among members of different sects and groups in a direct and continuous manner.

Al-Monitor met with members of Citizenship Ambassadors to learn more about their work. Lara said that thus far she has worked with 20 youths — including Christians, Yazidis and Shabaks. She presented them with information on minorities in Iraq, including those who are no longer around, such as Jews, and explained some of the misconceptions regarding the beliefs of various religions. She then took them to the monastery of Rabban Hormizd, near al-Qawsh, so they could meet with a Christian cleric, who talked to them about tolerance and love for the other in Christianity. They then traveled to Lalish, in the northern Sheikan district, to meet with a Yazidi expert, who spoke about his religion and clarified some of the misconceptions regarding it. Next, they visited a mosque, where a sheikh explained to them that terrorism in Iraq is in no way connected to the Islamic faith. He informed them that those who carry out such acts are criminals far removed from the essence of the religion.

Seif told Al-Monitor that he views the Citizenship Ambassadors project as a microcosm of Iraq. He said that he and his friends are working to expand the group to include the largest number of people possible, from all the provinces and every affiliation. Speaking about the difficult security situation for such work in his home province, Anbar, Seif offered, "Despite the difficult challenges, we were able to hold preparatory workshops and then we visited the Shrine of Abu Hanifa al-Numan, the imam of the Hanafi school of Sunni jurisprudence, as well as the shrine of al-Kazim, the seventh imam for Twelver Shiites. Most of the participants were visiting the holy places of other religions for the first time in their lives to get to know the other directly, face-to-face."

Saad Salloum, the director of the Masarat Institute and the man behind the idea for Citizenship Ambassadors, told Al-Monitor that what these youths are doing is part of We Are All Citizens, a comprehensive program organized by his institute, in cooperation with a range of civil activists, to establish the bases of citizenship in society and bring together the elements necessary to reduce Iraq's escalating sectarian conflict. The program works on a number of levels: with the Iraqi parliament to ratify relevant laws; with religious figures to strengthen communications with them and urge them to play a positive role in ameliorating sectarian conflict; with universities and research institutes to focus studies on phenomena and problems associated with the issues of Iraqi citizenship, to change and develop school curricula (which currently includes content that helps spread hatred but should be transformed into a tool for establishing a sense of shared citizenship and coexistence between the various segments of society); and with a wide-ranging and expanding social network to stand up in the face of the growing gap dividing various segments of the people.

The worthiness of this project has led international humanitarian organizations, among them the IKV Pax Christi Institute, to form ties with it, support it and develop similar programs in other countries in the Middle East, a region suffering from a number of sectarian crises. This is important for Iraqis, because the sectarian conflict in their country has become linked to what is happening in other parts of the region. It is thus necessary to be prepared and ready to take proactive stances toward events.