International sanctions and regional tensions over Syria could still upset the uptick in Iran-Turkey economic relations, but the trend is positive. 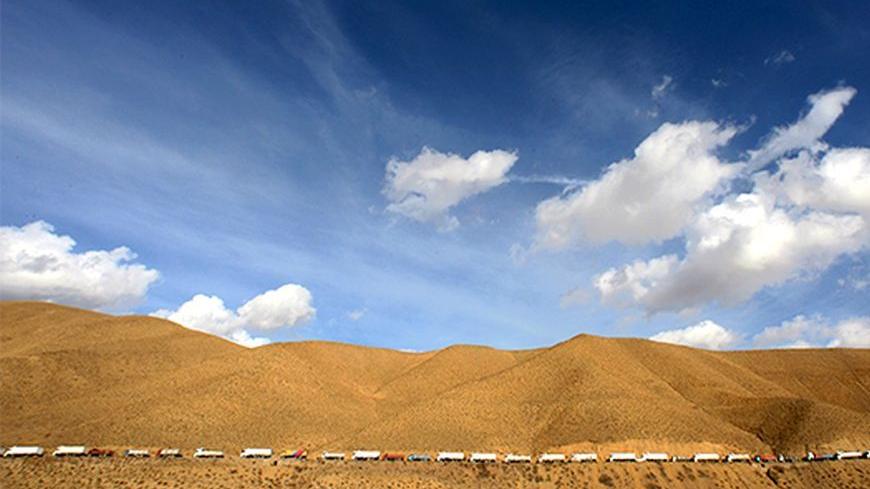 Hundreds of trucks bringing in diesel from Iran line up on a road as they head to the eastern province of Van in Turkey, Nov. 30, 2005. - REUTERS/Fatih Saribas

The future of Iran-Turkey relations has been a topic of interest, especially as Ankara and Tehran stand on the opposite sides of the Syrian crisis. There has been some speculation about a cooling off in the relations and a collapse in the vibrant trade and energy ties between the two neighbors. However, as will be shown below, the outlook for trade and energy ties remains positive.

On Oct. 17, Turkish Energy Minister Taner Yildiz was quoted as saying that Turkey would continue to import oil and gas from Iran despite Western pressure to reduce its imports. Turkey is importing 10 billion cubic meters (bcm) of gas per year from Iran but would buy more if it were available, Yildiz said in a briefing during the World Energy Congress in South Korea. The country would also take at least the same 5 million tons (100,000 barrels per day) of Iranian crude in 2014 that it is taking this year, as any more cuts in the volumes from Iran would “threaten” its economy, Yildiz said. Evidently, energy cooperation, especially Turkish gas imports from Iran, is an important cornerstone in bilateral relations; however, one needs to appreciate the nature of Iran-Turkey ties to assess how sustainable these relations are in the current challenging environment.

The two countries have historically enjoyed a good relationship facilitated by cultural and religious affinities. Evidently, due to their regional and international ambitions, Iran and Turkey have also had their share of regional competition, but compared to other bilateral relations in the Middle East, this relationship has been a robust one. In addition to an important degree of economic and trade interdependency, in the foreign policy strategies of both countries, there is a special attention to the other party as an Islamic and strategic neighbor.

In the past decade, the core of the relationship has been based on strengthening trade and energy relations. In fact, Iran-Turkey trade reached $21.3 billion in 2012 (up from $1.2 billion in 2002; see graph below), which makes Turkey one of the most significant trading partners of Iran. According to the Turkish Ministry of Economy, Iran was Turkey’s third-largest export market in 2012 with an export volume of $9.9 billion. In the same year, Iran was Turkey’s sixth-largest supplier of imported goods, with a value of $11.4 billion. Total trade volume was up 33% from 2011. The top five Turkish import categories for 2012 were coal and raw petroleum materials; natural gas, plastics in primary forms; and, metals other than iron and organic chemicals.

If this trend continues, the two sides will achieve their set goal of a $30 billion trade volume by 2015 — a goal that was committed to in an agreement signed during an official trip to Iran in February 2011 by Turkish President Abdullah Gul.

To understand the growing trade ties between the two countries, it is important to look at the following trends:

Furthermore, from a business perspective, it is important that Turkey and Iran have signed a double taxation treaty as well as an investment protection treaty and they are also leading members of two trade-based alliances, i.e., the Economic Cooperation Organization (ECO), which is a regional trade and investment community, and the D-8, which is an alliance of the eight leading and populous Islamic countries including Iran, Turkey, Malaysia, Indonesia, Egypt, Nigeria, Pakistan and Bangladesh.

It is clear that the relations between Iran and Turkey are driven by economic and energy interests, however, regional developments and political uncertainties could undermine this relationship in the short to medium term. One factor that some analysts mention as an irritant in Iran-Turkey relations is the growing significance of Iraqi Kurdistan as an energy supplier to Turkey. It is true that Turkey is importing larger amounts of crude oil from the KRG, however, no regional player can substitute the Iranian role as a gas suppler to Turkey and this role will even grow more significant, once new capacities are generated for further gas exports from Iran.

Nonetheless, issues such as continued international sanctions and regional tensions emanating from Syria and Iraq would irritate the relationship. The strategic shifts in the region, especially political processes in Egypt and Saudi Arabia will also have direct and indirect impacts on Iran-Turkey relations. However, despite all potential hiccups, Tehran and Ankara will remain significant players in a changing region and they will cooperate and compete at the same time. This is what they have managed to do for centuries without much confrontation and it will continue with its usual ups and downs. At the same time, the growth of trade and investment will mean that the business communities in both states will also become significant stakeholders who would support a calm and sustainable relationship that will allow business interests to be protected.