While technically illegal, satellite dishes in Iran are ubiquitous, creating a niche market for the men who install them. 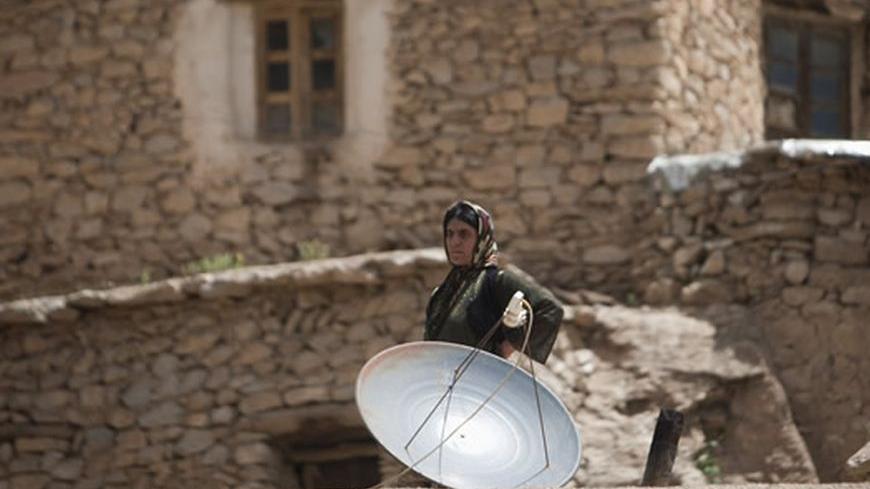 An Iranian Sunni Kurdish woman stands behind a satellite dish on the rooftop of her home in Palangan village, about 660 kilometers (412 miles) southwest of Tehran, May 11, 2011. - REUTERS/Morteza Nikoubazl

On a street corner in Tehran stand two cousins. One with a large plastic bag, the other with a laptop case. Amir and Javad, between 35 and 40, are one of the small groups of discreet, independently working men who install and maintain satellite dishes in Iran’s capital.

Can’t find BBC Persian? Not able to watch Rafael Nadal on Al Jazeera sports? Amir and Javad are the guys to call.

“We’ve been in all kinds of homes,” said Amir. “From those of moderate families to the home of a cleric,” he added.

According to a 1994 law, it's illegal to own a satellite dish. Yet, like many rules after the revolution of 1979, Iranians tend to bend them to their own liking.

When satellites became a hot commodity in the 1990s, there were only several channels to choose from. Now, Iranians have access to several hundred streaming from all parts of the globe. Even the diaspora developed its own TV channels broadcasting the news, cultural programs or programs displaying blatant opposition to the government. There are about 50 pornographic satellite channels, which are often censored or locked out of respect by Amir and Javad.

“One time, we paid a visit to an old couple,” described Javad. “While the old lady was in the kitchen making tea for us, her husband quickly whispered, 'You know those sexy channels you lock [with a code]? Leave me the key please!'”

For Iranians, satellite dishes serve as a gateway to the world beyond Iran. Television has always been therapeutic and a way to tune out, but for Iranian viewers it is not the channels alone that bring a sense of serenity.

The satellite installers themselves double as therapists, listening, for instance, to the problems of a father who struggled to understand why his son is so distant from him now that he is an adult, or those of a traditional mother who attempted to accept the fact that her daughter is no longer married. Not only do Amir and Javad provide an entertainment service, they have a window into the lives of Iranians of all classes and backgrounds, whilst providing counsel for families in Tehran.

The satellite business is unfazed by economics or politics — there is not a day where the duo is not busy working on someone’s rooftop or balcony. What makes their job worthwhile is not just the money they make to support their families but also the hospitality in Iranians homes that consists of sharing a cup of tea or a meal.

“They don’t need us only for the channels they want to watch, they need us for our listening ear,” said Javad.

Just the other day, one of their clients called crying, confused what to do about her marriage. Unhappy with her husband, she faced the dilemma of whether she should divorce him and then move abroad. Embarrassed to tell her family, the unidentified woman called Amir — a father of two — seeking his advice.

“Follow your heart and see what makes you happy,” Amir told her.

With an immense amount of parazit (static) in place — caused by the Islamic Revolutionary Guard Corps, thus disrupting satellite reception — the cousins are ever so busy helping Iranians check out of the reality of living with sanctions by giving access to popular Iranian diaspora shows such as “Dinner is Served” on Manoto 1.

The more static, the more calls — which also means more therapeutic sessions with their customers.

“We can’t always be there for them because we need to work, but they are free to call us and tell us their problems,” explained Javad. “If we have time that day, we will stop by and check to see how they are doing.”

Since the satellite dishes are illegal, the government cracks down on owners. The moral police will often penalize homeowners, while either hauling away dishes in bulk or throwing them off rooftops. Previously, the police would ring the doorbell — often disguising themselves — and barge in when the unsuspecting homeowner opened the door. Realizing Iranians have learned their tactics — they no longer open their doors for people they are suspicious of — the moral police now climb up walls in plainclothes and enter buildings and homes that way.

The thought of being apprehended crosses Amir's and Javad’s minds, but it's a risk they are willing to take to provide their services to their fellow Iranians.

“Iranians can deal with a lot of things, but they cannot live without their satellite dishes,” said Amir.

In September alone, hundreds of satellite dishes were confiscated and reportedly run over by an armed personnel carrier. Ahmad Khatami, a senior cleric and member of the Assembly of Experts, described the contraband as “fighting against Islam, the Islamic Revolution and the great Iranian nation.”

No matter how many times confiscations happen, families and building managers are quick to install yet another satellite system, even within hours of an incident.

That does not mean Amir and Javad have not found means to combat the police in their own way. Satellite dishes that once dominated rooftops or windowsills are now put on balconies on an axis, so that changing direction is easy depending on what channel frequency one is looking for. Using balconies is not a new feat, but the fact that the duo developed an adjustable dish shows the ingenuity of satellite installers without a home office.

One begs to ask how these satellite dishes make it into Iran since they are illegal. Amir and Javad described a number of ways including corruption at the Iranian border and the use of underwater boxes that are tied to ships coming from the United Arab Emirates.

“They can try to stop us, but we will keep delivering. … People count on us.”

Holly Dagres is an Iranian-American analyst and commentator on Middle East affairs. Currently living in Egypt, she is a researcher at the Cairo Review of Global Affairs. On Twitter: @PoliticallyAff