As Iran's June 14 presidential elections near, Internet users are turning to virtual private networks (VPNs) to bypass censors, accepting the risks that come with them. 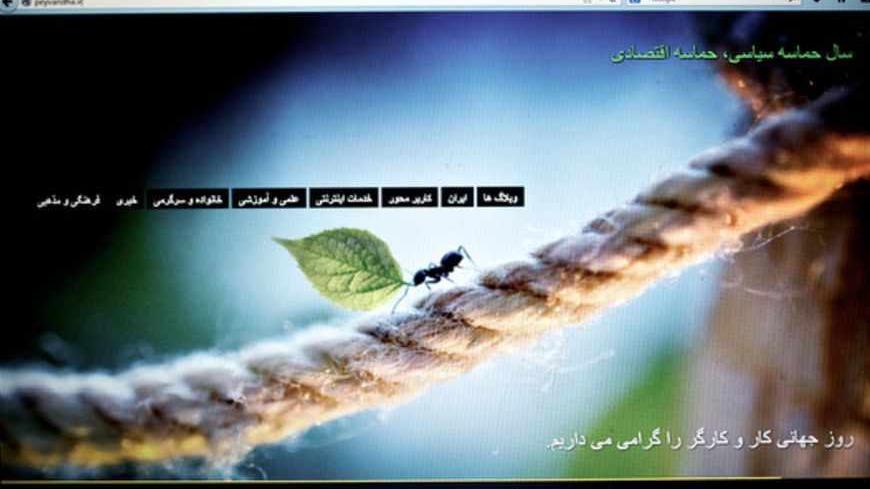 A laptop screen shows a webpage that appears when a user tries to visit websites blocked by the Iranian government, in Tehran, May 13, 2013. The top line reads in Farsi "Year of political and economical epoch," and the bottom line reads, "We honor world Labor Day." - BEHROUZ MEHRI/AFP/Getty Images

With the Iranian presidential elections coming up on June 14, high-speed, filter-free Internet access in the Islamic republic has become scarce. Earlier this month, the Iranian daily Ghanoon likened the state of the Internet in Iran to being in a coma — alive but barely functioning.

Although Iran had some 28 million Internet users in 2009 — including the largest number of bloggers and general users in the Middle East — Iranians continue to find themselves stuck behind an “electronic curtain” without the tools to get around it or through it.

During the 2009 post-election protests, or Green Movement, tools like FreeGate and DynaWeb allowed citizen journalists to share testimonies and videos with the world at a time when the international media was prevented from covering the crackdown on demonstrators.

The civil liberties movement in Iran has grown, but the regime continues to suppress dissent, particularly regarding freedom of expression on the Internet. It was not until Iranian authorities saw how such social media websites as Facebook and YouTube could be used against them that the government deemed the Internet a threat to its existence. One should not, however, confuse the Green Movement with a social media revolution.

Almost four years later, most Iranians have graduated to virtual private networks (VPNs) to access the Internet. VPNs are sold on the black market, but they are not hard to come by. Paytakht, a prominent technology center in Tehran, is where in August 2012 I tried to find this contraband, a commodity as common as a home satellite dish.

Located in a seven-story building, Paytakht is where everyone goes to shop for the latest in technology. These days, the menu consists of contraband iPads, iPhones, MacBooks and Androids that have somehow managed to make their way into the Islamic Republic in bulk. After asking about VPNs at five shops, I finally succeeded in finding someone willing to help me acquire an illegal set of characters and numbers to free my computer from government filters.

A man in his twenties asked me to follow him, but then asked me to wait outside a store selling "World of Warcraft" and other popular, pirated computer games. Some minutes later, I was ushered in to make the purchase.

“How much is a month of VPN access?” I asked.

“Fifteen thousand toman a month” (or, about $5.) He then proceeded to tell me the prices for six months and a year. Having my suspicions about the safety of the venture, I told the man I would think about it and then left the store.

Assuming that I thought the vendor was ripping me off, the middleman followed me out and proceeded to tell me about an alternative. He described how a website with a .id (dot India) address could provide me with a VPN if I paid with an Iranian debit card or was willing to deposit money into an Iranian National Bank account. Either way, once the money was deposited, he told me, I would be emailed a VPN to circumvent the censors.

This may all sound like a good setup at first, but in the long run, there is no telling who is behind the distribution of the VPNs to black market sellers in Iran.

The Islamic Revolutionary Guard Corps (IRGC) is currently the primary government arm filtering web content. In November 2010, it formed the Cyber Defense Command to monitor Internet activity. According to the Freedom House report "Freedom on the Net: Iran," in 2010 and 2011 alone, the Iranian regime reportedly allocated $500 million of its annual budget to fighting a "soft war" it believes is being waged against it.

Some analysts believe the IRGC is behind the selling of VPNs. To Ahmed, a computer engineer in Tehran, such suspicion is logical.

“One thing to remember is that the analyzing method the cyber police are using, technically known as 'deep packet inspection,' is quite expensive,” Ahmed told Al-Monitor. “The more bandwidth they try to analyze, the more expensive it gets, so they would need more and more servers.” To facilitate their work, as well as bring in cash for the IRGC, it would certainly make sense if the police themselves were the ones making VPNs easily accessible.

In March, Ramezanali Sobhanifard, the head of the Majlis' Information and Communication Technology Committee, was quoted as saying, “Within the last few days, illegal VPN ports in the country have been blocked.… Only legal and registered VPNs can from now on be used.”

Various sources report that Skype and Viber are down in Iran, even via VPNs. Some Iranians see this as a sign of a permanent move toward the national Intranet service the government has been pushing for the past couple of years. Others see it as a temporary bump, until the presidential elections pass. Nevertheless, this should be cause for concern as June 14 inches closer. Iran could face an Internet blackout like that during Egypt’s January 25 Revolution regardless of the outcome of the election.

Holly Dagres is an Iranian-American analyst and commentator on Middle East affairs. Currently living in Egypt, she is a researcher at the Cairo Review of Global Affairs. On Twitter: @PoliticallyAff