France hosts a Hezbollah deputy just three months after the party was added to the EU terrorist list. 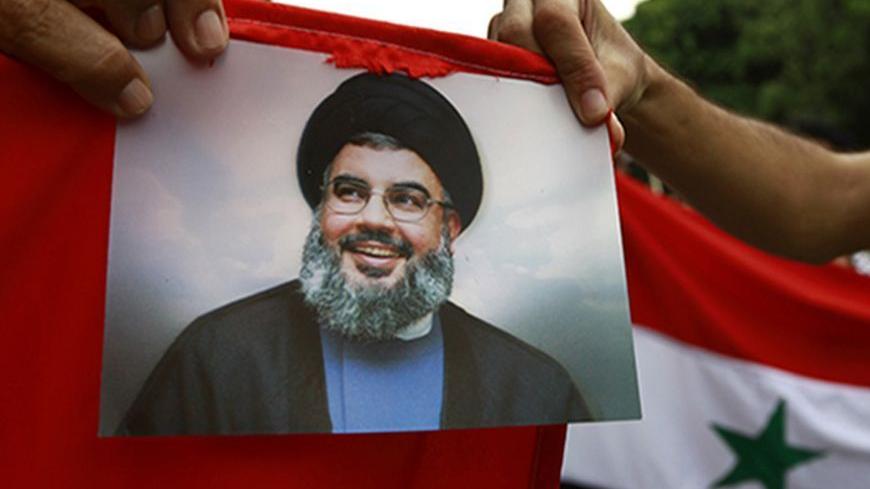 Protesters in Tunis shout slogans as they hold an image of Lebanese Hezbollah leader Sayyed Hassan Nasrallah during a demonstration against the possibility of a U.S. military strike against the Syrian government, Sept. 10, 2013. - REUTERS/Anis Mili

On July 22, 2013, all 28 European Union (EU) countries unanimously agreed to add Hezbollah’s military wing to the EU list of terrorist organizations. But less than three months later, Europe has opened its doors to Hezbollah as a special guest. On Oct. 12-14, the French Foreign Ministry received Hezbollah deputy Ali Fayyad of the Lebanese parliament as a guest lecturer for French diplomats, analysts and experts; he explained how Paris was wrong and Hezbollah was right.

Paris held a parliamentary symposium on banning the death penalty in the French Senate. Three Lebanese deputies were invited. One was MP Samir Jisr from the parliamentary bloc of former Prime Minister Saad Hariri. Jisr is a lawyer, the former head of the lawyers syndicate, and chairman of the parliamentary committee involved in the death penalty issue. The second was MP Ghassan Moukheiber from Michel Aoun’s bloc. Moukheiber is also a lawyer and a civil society activist on human rights. The third guest, Fayyad, is neither a lawyer nor directly involved in the symposium’s topic: TheHezbollah deputy is a social sciences professor.

It soon became apparent that this was an arrangement whereby the three Lebanese MPs went to the Senate, from where the Hezbollah deputy would head toward the French Foreign Ministry. Once there, Fayyad met with officials of the Middle East department and the center of analysis and exploration in the ministry, where he gave a two-hour introduction and question-and-answer session.

According to Hezbollah sources, the French have decided to open up to Hezbollah, the most powerful Shiite organization in Lebanon, and are ready to start a new phase of French and European dialogue with the party, while the party asserts that it is adhering to all its positions and choices.

But what has changed in these three months? Hezbollah circles confirmed to Al-Monitor that since the EU’s decision in July, it was clear to the party that the issue was not serious and did not reflect Europe’s actual convictions. Even before the decision was issued, three European ambassadors in Beirut visited Hezbollah officials and informed them that they were not personally convinced about the decision. They also noted that their governments were not convinced about the decision that was about to be issued. Even after the decision was issued, a record number of meetings were held between Hezbollah officials and European diplomats in the Lebanese capital. Even the EU ambassador to Lebanon, Angelina Eichhorst, visited Hezbollah’s international relations official Ammar Moussawi as well as Hezbollah cabinet ministers Mohammed Fneish and Hussein Hajj Hassan, within just one week of the decision.

Apparently, new developments made the Paris ​​dialogue not only possible, but also necessary and urgent. Hezbollah sources informed Al-Monitor that the French Foreign Ministry officials told Fayyad that Paris is open to dialogue with Hezbollah on the basis of its commitment to Lebanon’s stability. Prominent issues in the discussion were the jihadist movements that have swept Syria and their impact on Lebanon; the Syrian refugees and their social, economic and security pressures on Lebanon; and the relations between the Lebanese sects and how those relations will be organized in the future.

Those watching the relationship between Paris and the southern suburbs of Beirut (Hezbollah’s stronghold) may note the various reasons behind the French and EU decision to invite Fayyad. Those reasons can be summarized as follows:

First, the French move came within the context of the recent American-Iranian openness. It is a factor that cannot be ignored with regard to the French initiative. It is as if those in Paris and Europe are trying to tell the Americans: “We are not mere followers or implementers of your policy. If Obama can contact President Hassan Rouhani, we too can host Hezbollah and hold dialogue with it directly.” Such French and European calculations don’t have to be read negatively. They can be interpreted positively: “Fine. You [the Americans] have decided to open up to Tehran. We too can help in this direction. And this is a small example of that.”

Second, Hezbollah’s visit to the French capital came in the context of the putative Russian-American agreement on Syria and the nearing of the Geneva II conference, in which Iran is likely to participate. It is clear that any settlement of the Syrian crisis will open up large horizons in the Levant, politically and especially economically. On the political level, there is the impression that the “Syrian solution” will be a model to be replicated to redraw the Levantine map as a whole and to resolve the wars and crises of most countries in the Arab region. That includes Lebanon, which France has historically cared about. Ending the Syrian war will also open up major investment opportunities in reconstruction and in energy sources and transportation routes in the eastern basin of the Mediterranean (Syria and Lebanon). Hezbollah is a key player in both countries and has a big impact on the developments there.

Third, those who are familiar with Hezbollah’s capabilities and its influence as a political force realize that the Shiite organization is present beyond Syria and Lebanon. It is present in Iraq, in all its detailed political composition. Some in Beirut say that representatives of the Iraqi political forces meet regularly in the cafes of Beirut’s southern suburb, where they discuss the outcome of their meetings with Hezbollah officials. Hezbollah is also present in Palestine, although to a lesser extent than before, given that its relations with Hamas have cooled somewhat. But Hezbollah still has contacts with Hamas and with other Palestinian factions. Hezbollah even has varying degrees of influence in Yemen, Bahrain, Kuwait and even Saudi Arabia and various Arab Gulf states, where Secretary-General Hassan Nasrallah can influence public opinion in each of these countries.

In 1996, when the relationship between Washington and Tehran was very negative, a Lebanese Christian minister participated in a conference in the Iranian capital. He was asked, “How do you go to Iran and we, as Christians in Lebanon, are the historical allies of the West?” He replied, “I rushed to talk in Tehran because when the winds of ‘flirting’ between Tehran and Washington start blowing, neither of them will be willing to hear us.” It seems that Paris today has adopted the same logic as Hezbollah, on behalf of all of Europe.