As argued by Sultan al-Qassemi, the Gulf cities of Dubai, Doha and Abu Dhabi deserve to be recognized as the new, 21st century centers of the Arab world. 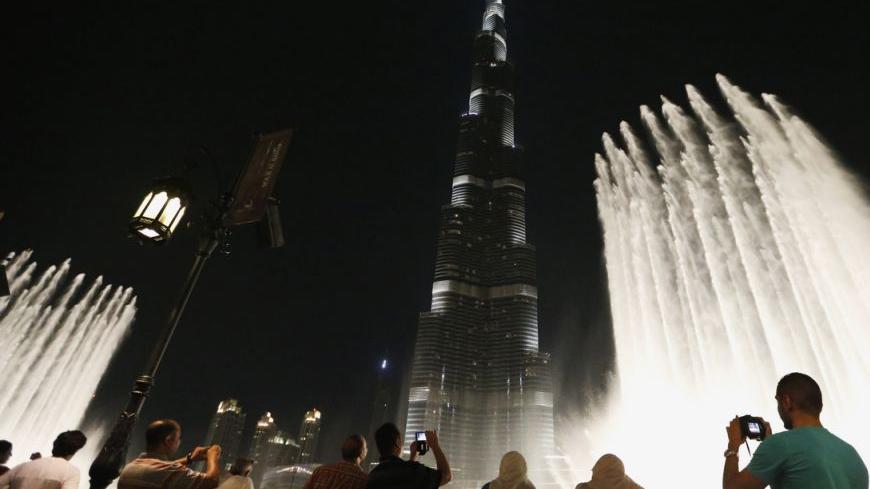 People watch a fountain in front of Burj Khalifa, currently the tallest building in the world, in Dubai, Oct. 9, 2013. - REUTERS/Ahmed Jadallah

Sultan al-Qassemi makes a compelling case in his "Gulf Cities Emerge as New Centers of Arab World" for the Arab Gulf cities of Dubai, Doha and Abu Dhabi as the new commercial, cultural, educational, media and diplomatic centers of the Arab world. He asserts that the traditional Arab metropolises of Beirut, Cairo, Damascus and Baghdad are fading away as centers of creativity.

But in his "Arab Cities Have a Long Way to Go Before Leading Arab World," Abbas al-Lawati seems to disagree with this proposition. He maintains that while Gulf cities have succeeded to move beyond the status of “cities of salt,” they cannot rise to become regional centers of excellence based on the achievements of foreign talents.

Cities go through ups and down. They live in glory, but often wane and sometimes completely vanish. New cities come along as new centers of attractions to produce symbols and values and act as trend-setters.

Arab cities are no exception. Cairo, Beirut, Baghdad and Damascus are yesterday’s cities whereas Dubai, Doha and Abu Dhabi (DDAD) are today’s and tomorrow’s centers. Cairo was the de facto political capital of the Arab world during Nasserism and the Arab nationalism of the 1950s and 1960s. The Cairo of 2013 is in near shambles and cannot function as a center for anything except probably for the 3-year-old Arab Spring which is going nowhere. Doha is now playing the role of the de facto diplomatic capital of the Arab world.

The fabulous city of Beirut once pretended to be the Arab world's cultural and media capital. But that was only very briefly during the 1960s and 1970s. Most of Beirut’s sudden glory stemmed from its rise as the financial capital at the time and as a safe haven for Arab intellectuals and artists running away from troubled places like Palestine, Syria, Iraq and other parts of the Arab world.

It was those Arab intellectuals, plus the legendary Fairuz and the two Rahbani brothers, Assi and Mansour, who contributed to Beirut’s rise as a regional cultural capital. Arab intellectuals seeking a safe place to park hardly think of Beirut these days. Lebanon is in a fragile state, and its capital, Beirut, is no longer the sexy and trendy city. Beirut cannot compete with the glamorous and global Dubai or the highly attractive Abu Dhabi or the super-rich Doha. These three Khaleeji cities are the magnets for Arab intellectuals and the professional class.

As for the two ancient cities of Baghdad and Damascus, they will always remain integral pillars of a distant past of cultural and scientific glories, but then became centers of hardly anything except those of being moribund ideological hotbeds of the Arab socialist Baath regimes, which brought unforgivable miseries to the people of Syria and Iraq.

The new, more global generations of Arab talents do not look up to any of these old Arab capitals as destinations and role-model cities. Unfortunately, these cities are more remembered for their political and cultural failures than their successes. They have completely lost their early cultural and ideological zest. For now and for the foreseeable future, forget Cairo, Beirut and certainly Damascus and Baghdad and focus on the cities of the future in the Gulf.

The brand-new Khaleeji cities of Dubai, Doha and Abu Dhabi are filling in the leadership vacuum. They are determined to take the lead. Indeed, it's their destiny to assume this leading role now.

This is the Arab Gulf states’ moment in contemporary Arab history. For the first time in decades, the Arab Gulf is at the center of power and calling the shots. Some might not believe it, but there has been a decisive shift in the regional balance of power and in the geo-economics and geopolitics of the Arab world in favor of the small states in the Gulf. The major league is in shambles and the minor league is enjoying the attention and flexing its muscles.

The Gulf moment indicates that the Arab Gulf states are today the net exporter of soft influence as well as hard power. This has set in motion a unique process of Gulfization/Khaleejization  (خلجنة) of the Arab world. Khaleejization simply means that at this moment the influence of the part (the Arab Gulf states) on the whole (the rest of the Arab world) is greater than the influence of the whole on the part.

Not just the Arab Gulf states carry more influence these days; Khaleeji cities, companies, leading figures of all walks of life as well as universities and media outlets are more visible than their Arab counterparts. The Gulf states produce more research, Gulf universities are ranked higher, Gulf novels are winning prestigious awards, and Gulf songs are listened to with due respect and Gulf cities are full of cultural events all year round.

The rise of the Khaleeji cities of Dubai, Doha and Abu Dhabi is just one manifestation of the Arab Gulf moment. Al-Qassemi is right in saying that the center of gravity and creativity has shifted away from Cairo, Beirut, Baghdad and Damascus to the rising cities in the Gulf. They have already taken over as the leading financial, political, cultural and media hubs in the region. To simply dismiss them as cities with no indigenous intellectual input is a gross misreading of how Arab cultural is a collective endeavor. Their cultural production is as value-added as Beirut’s and Cairo’s. The Khaleeji cities are already here as centers of attractions. They intend to stay in the lead for a long time to come.

The more we recognize this fact, the more we are in tune with 21st century realities.

Abdulkhaleq Abdulla is a professor of political science from the United Arab Emirates. On Twitter: @Abdulkhaleq_UAE