The tightened siege on Gaza has also caused a financial squeeze on universities, which have come under student pressure to prevent an increase in tuition. 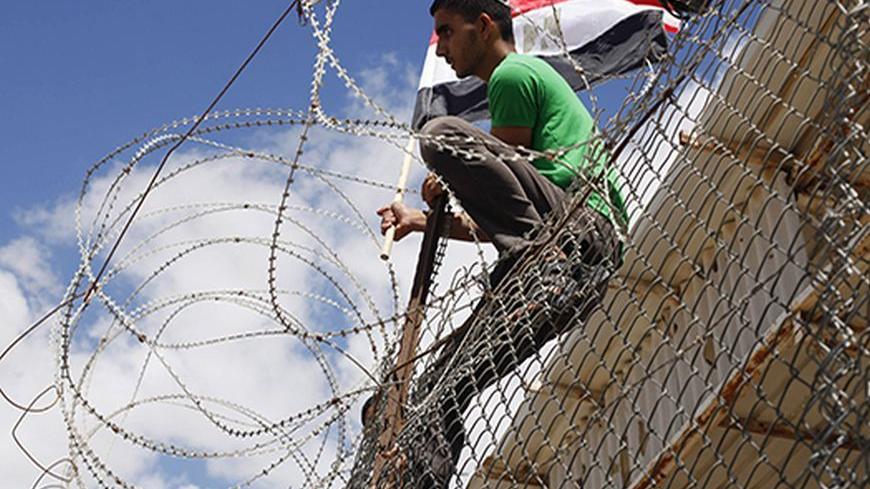 A Palestinian youth waves an Egyptian flag as he takes part in a rally calling on Egyptian authorities to open the Rafah crossing, outside the crossing in the southern Gaza Strip, Sept. 16, 2013. - REUTERS/Ibraheem Abu Mustafa

GAZA CITY, Gaza Strip — The siege surrounding Gaza has affected hundreds of university students. Some who are studying in universities outside of the Strip have been unable to enroll for the new semester because of the closure of the Rafah crossing between Gaza and Egypt, as reported by Al-Monitor. There is also another group of students in Gaza who, due to the deteriorating economic conditions, cannot afford fees for local universities.

The increased siege on the Strip and its institutions — particularly academic ones — has pushed some universities to take steps requiring students to register for a full schedule and to pay all fees without loans or scholarships.

The Islamic University is one of several universities that has decided to cancel the minimum registration of six hours and subsequent fees. The university’s president, Kamalain Shaath, justified the decision in a statement posted on the website of the Ministry of Education and Higher Education in Gaza on Sept. 1. He said the decision was due to "the repercussions of the financial crisis experienced by the university as a result of the loss of government support from the governments in Gaza and Ramallah, in addition to a lack of clarity of vision for grants for the university. "

Iman Abu Haloub, 18, who was enrolled to study mathematics at the Islamic University, has been unable to pay her university fees of $350 a semester. “My family and I prepared the money, but our economic condition is bad. My father, who works as a blacksmith, stopped working after injuring his eye. Because of this, I withdrew from my studies and gave him the money for medical treatment,” she told Al-Monitor.

She clarified that she had withdrawn at the beginning of the new semester, after the decision was issued to cancel the minimum number of hours and fees. Previously, she would have been able to remain at the university if she had paid one third of the full fees, or $116.

Abu Haloub added that she got good grades in high school, but now studies at a cheaper university without her friends, and with fellow students who are much older.

Due to the increased siege imposed on the Strip in the last two months, which has led to deteriorating economic conditions and the unemployment of tens of thousands of workers, the two student councils at Islamic University — male and female students have separate councils — have protested and suspended classes from Sept. 7 to 9 following the university’s decision to cancel the minimum fee in light of the difficult economic conditions in Gaza. The protests, which were the first of their kind in seven years, led to the Islamic University’s administration backing down from its decision on Sept. 10 to cancel the minimum fee.

Raed al-Shanti, 21, is studying medical administration at the Islamic University. He had to withdraw from the final semester, a few months before graduation. “I could not pay the tuition fees for the current semester nor a portion of the $500 student loan,” he told Al-Monitor. He explained that paying part of that loan is a prerequisite for registering. “This is why I dropped out, even though I was hoping to graduate and work to help my family,” he said.

Dina Sarhan, the president of the female student council at the Islamic University, said, "The university’s decision to cancel the minimum registration hours came at the beginning of August." She clarified that this meant all students — including those who are very poor — had to register for a full schedule, 22 hours, and pay all fees.

"We know that the university is going through a financial crisis, but the students are experiencing a more difficult crisis because of the intensification of the siege. The students alone should not bear the university’s crisis."

Hundreds of Gaza students are still unable to attend their universities because of the closure of the crossing. Hundreds of men and women crowded under the hot September sun in front of the two travel registration windows at the Abu Khadra headquarters of the Interior Ministry in Gaza, hoping to leave the Gaza Strip in order to join their universities abroad.

Abeer Qobta, 22, who studies sociology at the University of Sweden, has not yet managed to get to her school, despite the fact that she registered for travel through the border crossing a week ago. She explained to Al-Monitor that her plane’s departure from the Cairo airport is scheduled for Oct. 13.

“We came here to register once again, having been previously turned back from the crossing when security officials there said that there was a backlog of previously registered travelers,” her mother, Faten Qobta, 46, said.

Political deadlock on the border

Gaza’s Hamas-run government affirmed through its mouthpiece, the al-Rai news agency, on the morning of Thursday, Sept. 26, that it was ready to explore any proposed mechanisms aimed at opening the Rafah border crossing.

News websites also quoted statements attributed to Palestinian Ambassador to Cairo Barakat al-Farra, in which he clarified that the crossing would remain closed until the “legitimate” authorities and the president’s guards returned to it. The websites pointed out that these statements were made in a TV interview with the Egyptian MBC channel on Sept. 21, 2013.

In the same context, Al-Monitor interviewed the spokesperson for the stranded students, Mohamad Abu Seif, in Abu Khadra square where he sought to meet with crossing officials in order to find a solution to the problem. “According to the lists of people registered to travel, there are 900 students enrolled at the graduate or undergraduate levels who attend classes in Egypt, Jordan, Algeria, Yemen, Turkey, Europe and other countries. Their numbers are increasing by the day,” he said.

Abu Seif, who is studying for a master's degree in history in Cairo, clarified that they were trying to find a mechanism by which all students would be allowed to travel in the next few days. “We have agreed with the authorities that three buses carrying students would be allowed to leave every day to solve their predicament. Some of them might forfeit their study semester, school year and the tuition they paid,” he explained. Abu Seif indicated that they were contacting the relevant universities, but not all of them understood what was going on at the Rafah crossing, which prevents them from giving the students valid excuses for their absences at their respective programs.

On Sept. 28, Egyptian authorities announced the opening of the Rafah crossing, but closed it shortly after under the pretext that there was a computer malfunction after one bus carrying about 60 people, from among 5,000 stuck in Gaza, entered Egypt.