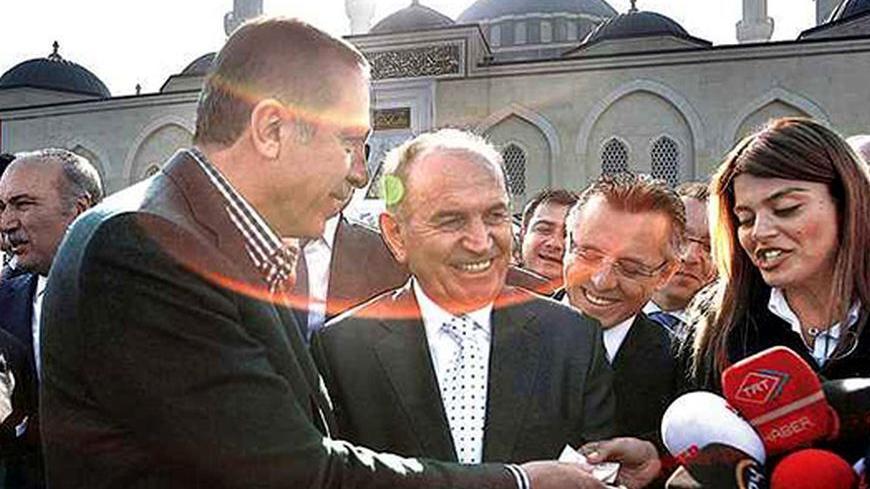 On Oct. 15, in the early hours of the morning, a scandal occurred in Istanbul that remarkably symbolized the ethical and identity crisis in Turkey’s political-media relations.

There were two anti-heroes of the incident. The entire world knows one: Prime Minister Recep Tayyip Erdogan. The other was Sultan Akten, a reporter for the pro-government TGRT TV channel.

What happened? Erdogan, after performing his Bayram prayers for the Eid al-Adha holidays with his entourage at the imposing Mimar Sinan Mosque on the Anatolian side of Istanbul, was answering questions from reporters. Then, he was accosted by an unusual request from Akten: “As TGRT news department, we have been following you since early hours. You know we have holiday traditions. We did not yet exchange our holiday greetings with our mothers and fathers. If my colleagues allow me, I want to exchange my first greetings with you and receive my holiday allowance from you instead of my father.’’

“My father is not here, but we have the patriarchal state here,” she added. In Turkey’s political lexicon, a father’s protective but authoritative features are also attributed to the state, hence the "patriarchal state."

The "patriarchal state" she was referring to was Erdogan. The reporter's request drew happy laughter from his entourage, led by EU Minister Egemen Bagis and Istanbul Mayor Kadir Topbas. Erdogan joked with people around him asking, “What if I don’t have enough money?" But he then took some money out of his pocket and handed it over to the reporter, who accepted it.

“Wish you a blessed holiday,” he said to her and then turned to other reporters: “This in the name of all of you,” which was his way of saying he had given an allowance to all the journalists present.

We found out that the prime minister gave Akten 200 Turkish lira, about $100. Akten shared the photo of the 200 lira on Twitter. That may be all there is to it, but it deserves to be called a scandal for two reasons.

First, it reflects the status of journalism in Turkey. We were witnessing a scene that amounted to something more serious than the shortcomings of a person presumed to be reporter in keeping a distance with a primary subject and do her job impartially, honestly and reliably.

This so-called journalist, by asking the prime minister for an allowance, denigrated herself and the profession she is representing because the allowance is an act of grace that children expect from adults.

In any democracy a journalist is someone who questions those in power as a professional mission. The prerequisite of performing that mission properly is to avoid entering into relations of interest with those in power and maintaining a respectable distance.

The minute the reporter asks the power holder for allowance and takes it, he or she loses the right to ask questions to those in power. This is when journalism ends.

This negative model that developed between the prime minister and a reporter at a micro-level determines the nature of political-media relations in Turkey in a way that will be detrimental to journalism and freedom of press. Any media institution that allows itself to be censored, or resorts to self-censorship for interests their bosses hope to derive from the political rule, in a way emulate Akten’s behavior.

The second aspect of the scandal is the prime minister’s agreement to the plea for allowance, which reflects perfectly his perception of the media.

In a normal democracy where the media more or less perform their mission, the leader of a country would have responded as such: "Excuse me, my dear lady, but to honor your request is not compatible with my understanding of my duty. If I give you that allowance, nobody will believe the honesty of questions you ask me. This won’t be good for either of us." But in this case, Erdogan's humorous hesitancy was because he wasn’t sure he had enough cash in his pocket.

The treatment of this allowance scandal by the prime minister and his retinue as a light-hearted event arises from the low stratum they ascribe to journalists and the media in general.

In the Muslim world, a wealthy and powerful person gives holiday allowance either to child relatives, those who serve him or to the poor who need such charity. To be perceived as an element of any those three positions should have been an unbearable situation for an independent and professional media.

In a country where political-media relations are defined at such levels, the media cannot perform their real mission of informing the public correctly. Of course, in such countries the government cannot be audited through independent and free reporting and as such the public will not be able to make the right political choices. In such a country, democracy will never be stable and solidly grounded.

The allowance scandal created much debate in social media. Pro-government Twitter users defended the prime minister and the reporter asking for allowance as a joke or part of religious holiday traditions.

In the meantime, the Ankara-based Contemporary Journalists Association issued a statement saying it has “censured with regret these unacceptable actions” of Erdogan and Akten. The statement said, “For TGRT reporter Sultan Akten to call the prime minister ‘patriarchal state’ and beg for holiday allowance shows that she is totally unaware of the requirements of her profession.”