The Egyptian government is seeking to block attempts by Israel's African allies to grant Israel observer status at the African Union. 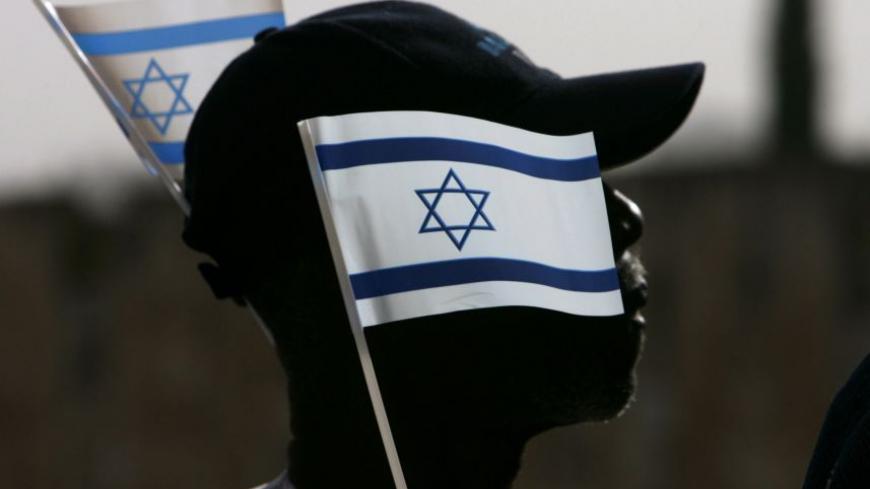 A Nigerian pilgrim holds Israel's national flag during a gathering in the Old City of Jerusalem, March 18, 2008. Nigeria is in favor of Israel getting observer status at the African Union. - REUTERS/Ronen Zvulun
October 3, 2013

CAIRO — Egyptian fears have been rekindled regarding the spread of Israeli influence in the Horn of Africa, and more particularly the Nile Basin, following information obtained by Egyptian security agencies that Ethiopia, Kenya and Nigeria were attempting to promote Israel’s candidacy as an observer member in the African Union (AU). These states were also urging other AU states to include a discussion of this request on the agenda for the African Summit in January 2014 in Addis Ababa.

Israel had submitted a request to the AU in 2003 for membership as an observer state, but at the time AU members did not approve its request. Meanwhile, Egypt is currently facing sanctions by the AU Peace and Security Council, which suspended Egypt's activity in the AU after the ouster of elected President Mohammed Morsi via unconstitutional decisions.

A diplomatic source at the Egyptian Foreign Ministry told Al-Monitor, “Cairo has information about Israel formally moving [via African mediators] toward resubmitting its request for observer status in the AU. Egypt had successfully thwarted this very request when Israel first submitted it 10 years ago.”

The source, who requested anonymity, added, “Ethiopia, Nigeria and Kenya were the most eager of African nations to see the resolution passed, with member states of the AU ultimately voting in favor of accepting Israeli membership [in 2003].” He explained the current moves to have Israel’s request resubmitted to the AU as “emanating from shared interests that link those countries with Israel.”

Media reports have said that the implementation of Israeli military contracts had begun with Ethiopia, Nigeria and Uganda. The contracts included the sale of unmanned aircraft used in operations against insurgents, as well as economic support programs and grants accorded to those countries’ agricultural and industrial sectors.

“We are carefully watching Israeli movements in Africa and have plans to confront any measures that might harm Egyptian interests. We have embarked on a set of unofficial actions to oppose Israel’s request and try to block the deliberation of the matter at the upcoming African Summit until Egypt’s membership to the AU is restored and we can officially start dealing with the issue,” an Egyptian security source specializing in African affairs told Al-Monitor.

“Cairo currently relies on intensive contacts and actions through the Arab League, in order to establish a common stance by all Arab member countries of the African Union, condemning and rejecting the Israeli request, as well as the latter’s practices in Palestine, while affirming our lack of trust in it,” explained the same source.

The AU, during the yearly meetings of its summit in January in Addis Ababa, had regularly issued statements deploring and condemning violations committed by Israel in Palestine. The resumption of peace talks recently between Israel and Palestine under the auspices of US Secretary of State John Kerry, however, calmed and stabilized the relationship between Africa and Israel.

In this regard, an official source with the Arab League’s African Affairs Division told Al-Monitor, the “position inside the Arab League might not necessarily lean in Egypt’s favor on this matter. Some Arab countries, such as Qatar and Morocco, have direct interests with African states. These are interests in which Israel is meddling through various means, lest we forget that Morocco is home to a sizable Jewish community.”

“The position of some African Arab countries cannot be determined in this regard. Egypt is merely intensifying contacts aimed at pressuring African countries to reject Israel’s request,” the source relayed. He said, “Egypt’s position currently lacks strong support and its African interests are not being safeguarded by other nations.”

On a diplomatic level, official instructions were sent by the Egyptian presidency and Foreign Ministry to the country’s embassies in African nations, asking them to intensify contacts that seek to monitor any developments regarding the Israeli request. They also sought to present a set of new proposals that highlight Egypt’s interest in bolstering its relations with African countries, an Egyptian diplomatic source stationed in one of the African countries told Al-Monitor.

“Egypt’s main concern about Israel being granted observer status in the AU revolves around fears that such a move would be used to harm Egyptian interests in the Nile Basin. Egypt is already engaged in an escalating dispute in this region sparked by the Entebbe Agreement, which would deprive Cairo of the quota of Nile water to which it has historically been entitled, previously fixed at 55.5 billion cubic meters by the 1959 agreement,” the source added

The same source said Ethiopia and Kenya’s official push, along with their call for active member states to vote in favor of Israel joining the AU, confirmed Egyptian concerns about Israel’s intentions. At present, security information points to efforts aimed at exploiting ongoing problems and conflicts centered on the Nile Basin as Israel bolsters its relations with second- and third-tier African leaders to safeguard its own interests and undermine Egypt’s influence in Africa.

Ambassador Mona Omar, the envoy for the Egyptian president to African countries, told Al-Monitor, "Israel obtaining status as an observer member in the African Union would allow it to be present during African summit meetings. This, in turn, would allow Israel to influence decisions, by offering grants and aid, or through putting pressure on member states and pushing them to vote for or pass specific resolutions."

Egyptian attempts to oppose Israel’s request for membership in the AU center around bilateral talks and actions inside the Arab League, as well as the careful monitoring of Israeli moves at a time when the current Egyptian administration has to contend with its activities being suspended at the AU. The government is also dealing with continued internal instability, centered on the writing of a new constitution. These factors all reduce Cairo’s chances of restoring its influence in Africa, which would be made even more complicated if Israel is granted observer status at the AU.

Ayah Aman is an Egyptian journalist for Al-Shorouk specializing in Africa and the Nile Basin, Turkey and Iran, and internal Egyptian social issues.