Palestinian President Mahmoud Abbas has adopted a conciliatory tone during the peace talks, but Israel's response is uncertain. 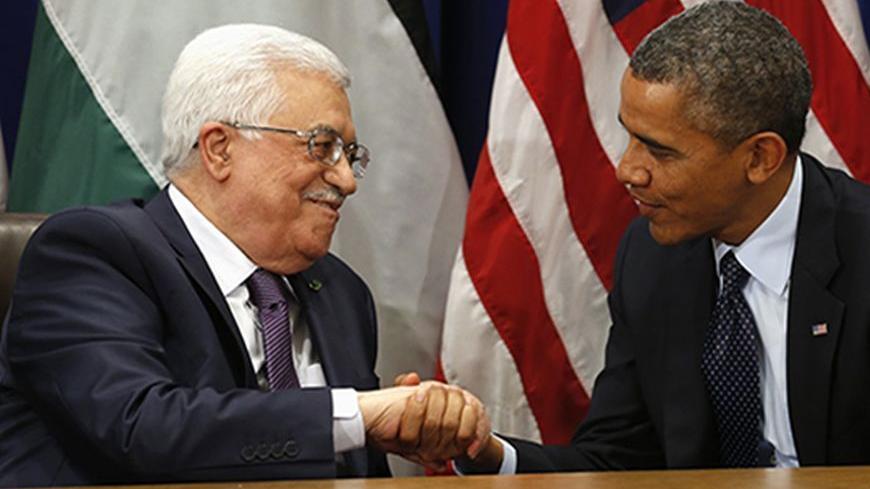 For nearly two years, Israeli Prime Minister Benjamin Netanyahu and other senior leaders have hammered home a single point: "Why are Palestinians refusing to negotiate with us?" Netanyahu repeatedly said that he would go anywhere — including Ramallah — to meet Palestinian President Mahmoud Abbas and initiate peace talks. At one time, he suggested setting up a tent somewhere between Jerusalem and Ramallah, so that the two parties could meet and theoretically solve the decadeslong conflict.

Today, a good two months into the US-sponsored nine-month secret Israeli-Palestinian negotiations, the only voice calling for public meetings is that of the Palestinian leader. Netanyahu, who waited 27 minutes and 48 seconds into his UN General Assembly speech to mention the Palestinians, appears to have all but forgotten his public demands to meet face to face with Abbas.

This week, Abbas appears to have pleasantly surprised Israeli Knesset members, whom he hosted at the Ramallah headquarters of the Palestinian government. The New York Times reported that Abbas did not use the word "occupation" in his public address to the Israeli delegation and barely mentioned the hot topic of Jewish settlements. Knesset member Hilik Bar, head of a 40-member left-wing caucus in the 120-member legislature, praised Abbas and his description of where the talks are heading. “I didn’t think it was going in a good direction. To hear that from Abbas, it is meaningful.”

In contrast with Abbas' conciliatory approach, Netanyahu appears to have escalated the anti-Palestinian rhetoric, claiming that the Palestinian mufti supported the Nazis, and that if Palestinians were serious about peace they would recognize Israel as a "Jewish state." Palestinians have repeatedly rejected the request, stating that 20% of Israeli citizens are non-Jewish Palestinian Arabs, while conceding that Israel can call itself whatever it wants.

Hosting Israeli politicians in Palestinian areas is also a tactical step that helps develop a human and emotional dimension. Whenever Israelis step out of their comfort zone and cross the few kilometers into Palestinian territory, they cannot help but realize the huge chasm that exists on all levels — economic, political and personal. The fact that the Palestinian population has a per capita gross domestic product (GDP) of around $1,600 — while Israel enjoys a per capita GDP of $22,128 — is brought home the moment an Israeli crosses the checkpoint separating wealthy Israel from poor and militarily oppressed Palestine.

Palestinian public rapprochement with Israeli officials — albeit very limited and carefully chosen — also plays well in the international arena. The Palestinian economy remains in deep trouble, and the need for financial support is crucial to the survival of a functioning Palestinian government and security. Abbas did not forget in his talk to remind Israeli Knesset members that security coordination between the Palestinians and Israelis had entered its seventh year with clearly evident results.

Ultimately, the Palestinians are focusing on the US hosts of the talks. Abbas met with US President Barack Obama in New York, and word from the United States is that the Americans are planning to step up their involvement in the talks. It is still unclear whether the Israelis will now allow the Americans into the negotiating room, but the stepped-up US role will soon be translated into suggesting bridging proposals. The Palestinian charm offensive is no doubt eyeing the newly invigorated role of Washington and wants to be sure that they are seen as making the right moves. Abbas’ conciliatory tone made to the visiting Israeli Knesset delegation will certainly help. The question that remains is how Israel will respond in the negotiating room.