A recent Turkish poll shows that those opposed to a war in Syria grew from 57% to 72% over the past year. 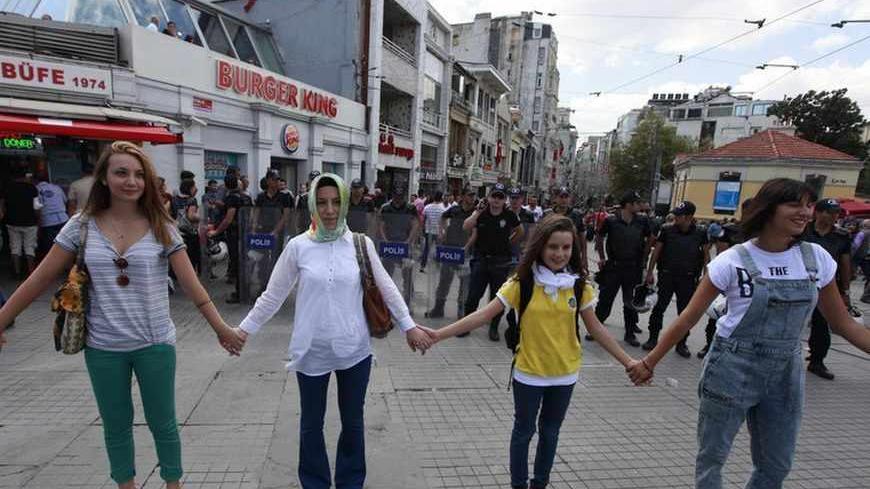 At a Sept. 4 press conference at Ankara Esenboga Airport, Prime Minister Recep Tayyip Erdogan, before his departure to the G20 summit in St. Petersburg, was asked whether he would be sharing with his bilateral contacts the evidence he has on the use of chemical weapons in Syria.

Erdogan replied, "There is no need for new evidence. I keep saying the same thing. The entire world has seen the pictures of those massacred, martyred children. If you are careful you will realize that there is no gun wound or blood visible, and that they were martyred with chemical bombs."

When another journalist asked, "Where will Turkey be in a possible US operation against Syria?" Erdogan answered, "Circumstances will determine that. We have said we are ready to take part in any kind of coalition."

When reminded of Syrian Deputy Foreign Minister Faisal al-Miqdad's warning that "in case the United States launches an operation against Syria, Damascus will hit back not only Israel but also Jordan and Turkey, if they support such an operation," Erdogan reacted, "Our country is always ready for such an eventuality. I don’t know how prepared Syria is. … Why Bashar [al-Assad] is making such a declaration, what does he count on, I don’t know."

The coalitions that Erdogan seeks to join can be of two types in today’s conjuncture: a "coalition of the willing" that will be formed without a UN Security Council resolution or a Western alliance under the NATO hat.

But to be ready to join any coalition is not the same as agreeing on the political objectives of the operation. We understand that Turkey doesn’t favor limiting the objectives of such an operation to punishment of the Baath regime and deterrence from chemical weapons use. If we remember, on Aug. 30, Erdogan said, "A limited operation against Syrian won’t satisfy us. It should be like it was in Kosovo. You cannot hit for a day or two and leave. It must compel the regime to the point of giving up."

A few hours after Erdogan’s departure to St. Petersburg, a senior Turkish official who was briefing a group of  journalists on Turkey’s position regarding a possible anti-Syria operation, gave details of what Erdogan meant by "you cannot hit for a day or two and leave."

Accordingly, Turkey finds appropriate an operation of a scope that will end the war. What Turkey understands from ending the war is the collapse of the regime.

I took notes from what was said about Ankara’s vision of the intervention and its aftermath: "The regime at present has about 40,000 soldiers as an active force and not all of them are combatants. Since their mobility has been constricted, they intervene from a distance. There is an asymmetry in weapons. They attack the people with airpower and missiles. The regime doesn’t have maximalist goals. Their aim is to prolong the war and demoralize their opponents. They are trying to hold on to the Homs-Damascus-Latakia line by conducting a war of attrition. The regime’s superiority against the opposition is with its heavy weapons, airpower, chemical weapons and missiles. This operation must be of a scope to end the war. If you degrade the regime’s capacity, this war will end."

Ankara therefore favors an operation that will not be limited to a few days but that will last until the military capacity of the Syrian regime is eradicated.

We don’t know whether the United States that is described by the Turkish official as the "sole non-regional game changing actor" shares Turkey’s position. All we know is that the Obama administration for the time being wants to make do with an operation that will penalize the regime and deter it from using chemical weapons.

On Sept. 6, a public opinion poll was released, giving the Justice and Development Party (AKP) government a headache. The Transatlantic Trends survey, prepared annually by the German Marshall Fund of the United States, revealed that the Turkish public’s opposition to an intervention in Syria has dramatically increased since last year.

According to the poll, conducted between June 3 and July 2, 72% of Turkish people oppose an intervention in Syria, up from 57% last year.

In the survey, respondents were told that there had recently been discussion of the desirability of intervening in Syria, where the government has been using military force to suppress an opposition movement. They were then asked whether their government should stay out completely or intervene. Only 21% of respondents in Turkey favored intervention. Those Turks who oppose intervention went up by 15 points in one year, and those who favored intervention decreased by 11 points.

Of course, one can ask what the results would have been if the survey was carried out after Aug. 21, when chemical weapons were used in Damascus. An answer to such a question would depend on multitude of assumptions such as who believes that the Assad regime carried out the attack. In this case, the tendency to support an intervention on humanitarian grounds would be stronger. But there may well be those who will stick to their anti-war position because such an intervention will increase probability of a war.

But the picture is clear: More than half of those who voted for the AKP in Turkey want their government to stay out of a war. That means the AKP government has not been able to prevent a decrease in the ratio of those supporting an intervention over the past year.

These results are critical for the AKP government because in March 2014 there will be local elections, which are expected to have serious effects on the political fate of the government and Erdogan. At a time when there is perceptible pressure on dollar parity and interest rates in Turkey's financial markets, pushing the country into a war that is not supported by the people will have negative consequences, not only for the economy but also for election results.

The Islamist AKP government has committed itself to a war that is not wanted by the majority of its own constituency.