A Salafi Assault on Turkish Theology?

Turkey's universities are witnessing a rise in a more dogmatic approach to Islamic philosophy. 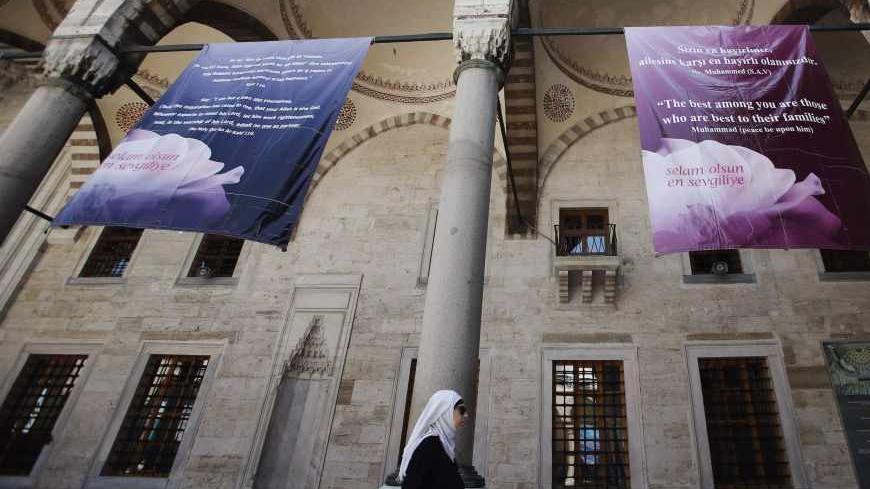 A woman walks at the courtyard of the Ottoman-era Sultanahmet mosque, also known as the Blue Mosque, in Istanbul, below banners depicting the sayings of Prophet Muhammad, April 26, 2013. - REUTERS/Murad Sezer

“Everything goes wrong all at once.” That is one of the versions of the oft-quoted Murphy’s Law, which seems to be prevalent these days in Turkey. Because as if all the political tensions and the declining democratic credentials of the country were not enough, a bizarre decision by the Higher Education Council has raised an unexpected concern: that Turkey’s theological faculties are being taken over by a more dogmatic understanding of Islam that has no respect for philosophy.

First, a summary of basic facts: In Turkey, all universities, even private ones, are under the “coordination” of the Higher Education Council (HEC), which is a state institution controlled by the government. This centralized system controls theology faculties as well, which are Turkey’s main source of well-educated men of religion. For a long time, the curriculum of the theology faculties has included both “Islamic sciences” such as the study of the Quran and the hadith (sayings of Prophet Muhammad), and secular disciplines such as sociology of religion and history of philosophy.

Since then, the theological community in Turkey has been discussing this “assault on philosophy,” as some have called it. In the past two weeks, some columnists, including myself, have criticized the HEC decision and warned against “theology without philosophy.” After my critical piece, I received dozens of emails from concerned professors and other lecturers in Turkey’s theology faculties. They all were disturbed, if not outraged, by the HEC’s decision.

One of them argued: “This decision will limit the theology graduates’ ability to grasp secular society and open their way to be influenced by the Wahhabi/Salafi strain of thought. It also represents a return to the dogmatic madrassa system of the era of decline, which only saw as tafseer [Quranic exegesis], fiqh [Islamic jurisprudence], and hadith as necessary sciences. This change in curriculum will make Islamic horizons more narrow and more shallow.”

Another professor of theology, who also wrote me, similarly argued that this new curriculum was tantamount “to disabling critical thinking … and opening the way to Salafi-style thinking.”

The word “Salafi” used by these two scholars needs some focus. The term, of course, now refers to specific Islamist parties in the Arabian peninsula, Egypt, Tunisia, Libya and elsewhere, but it also refers to a certain mindset: The belief that Muslims need no wisdom other than Islamic sources. In this view, non-Islamic sources of knowledge, such as philosophy, are considered not only unnecessary, but also deceptive and corruptive.

The origins of this anti-rational strain in Islam go back to Imam Ahmad ibn Hanbal (780–855), who was the fiercest opponent of the Muslim theologians and “philosophers” of the time who were influenced by Greek thinkers such Aristotle. Despite the fact that this Greek influence made schools such as the Mutazilites not unbelievers but only more intellectual believers who built rational arguments for the faith, Hanbal and his followers saw them as heretics. Hanbal argued that all articles of Islam should be simply believed “without asking how” (bila kayf), a slogan which soon became a theological principle for his followers. Later, they were also called the “Salafis,” because they rejected adding any new wisdom to Islamic culture other than what the “Salaf” (earlier generations) of Islam had left behind. (For more on this “medieval war of ideas” in Islam, see my book: Islam without Extremes: A Muslim Case for Liberty.)

Yet what does this medieval fideism [reliance on faith over reason] have to do with modern Turkey’s HEC? In fact, Salafism in Turkey, as a self-identified movement, is almost non-existent, but the Salafi mindset, in the sense of opposition to philosophy, is somewhat influential among the most conservative Sunnis. Moreover, as I learned from a theological faculty administrator with some insider information about the HEC, a few new members of the official body, who are all government appointees, strongly share this aversion to philosophy.

“But what is their problem with philosophy?” I asked the same administrator. “They think that it may confuse the students and shake their beliefs,” he explained. “They,” in other words, preferred minds that believed out of mere belief, not through questioning and contemplation.

The better news is that this “Salafi” strain within Turkey’s educators is a narrow one, which is getting a strong backlash from academics and opinion leaders who oppose the new HEC decision and are calling for more philosophy to be taught by theology faculties. Within the governing AKP (Justice and Development Party), too, there are people who share this latter view, as I know from the phone calls I have received from two AKP deputies who supported my criticism against the HEC and promised to lobby for the restoration of “secular sciences.”

Perhaps, this is one of the various indications that the AKP, after a pretty successful decade, is really at a serious crossroads: The party will either reform itself and move forward by adopting global norms of democracy — and, well, even reason. Or it will revert back to the narrow-minded Islamism that its cadre actually had abandoned in the late ’90s for a more liberal route. The worrisome assault on philosophy suggests, at the very least, that this liberal route was not internalized enough.