Turkey’s International Islamic University could be a meaningful contribution to the Islamic world, but only if it is not dominated by the ultra-conservative school of jurisprudence and theology. 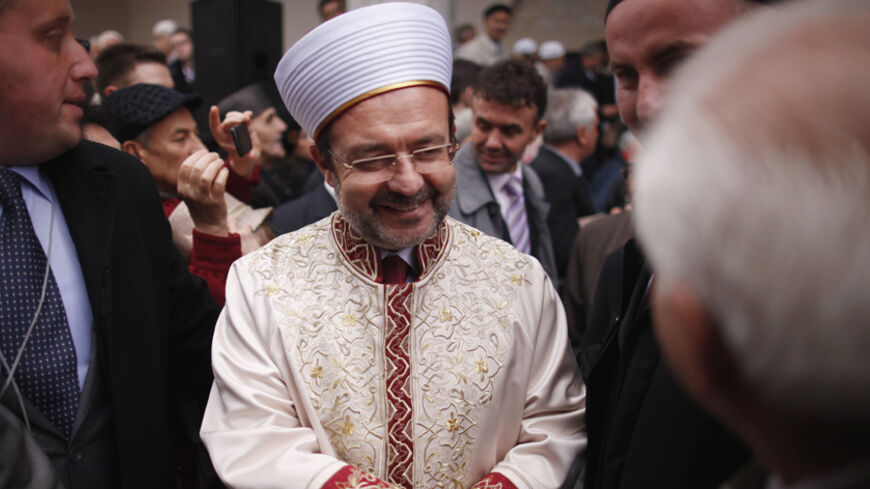 Mehmet Gormez, the head of Turkey's Directorate of Religious Affairs, shakes hands with an onlooker after an inauguration ceremony in front of a mosque in Sarajevo, Nov. 15, 2012. - REUTERS/Dado Ruvic

Turkey’s top cleric, Mehmet Gormez, the head of the Directorate of Religious Affairs (DRA), unveiled a new project earlier this week while speaking to a group of Turkish journalists. Turkey will soon have an “International Islamic University,” Gormez said, adding that Islamic universities in Egypt, Pakistan, Iran and Malaysia were “unable to find solutions to problems in the world.” By that comment, he implicitly signaled that Turkey is getting ready to make bolder claims in the Islamic market of ideas.

First, a few observations: Gormez’s remarks came in Mecca, where he was heading the Turkish delegation for the hajj, or the Islamic pilgrimage. Moreover, Gormez had also criticized Saudi authorities during the same trip, blaming them for “destroying history” by building huge skyscrapers that overshadow the Kaaba. This was, besides being a personal remark, an objection by the history-sensitive “Turkish Islam” to the literalist “Saudi Islam.”

Second, the institution that Gormez heads, the DRA — a peculiar quasi-ministry of religion in a supposedly secular Turkey — would never be able to make statements about education before the era of the incumbent Justice and Development Party (AKP), i.e., the era from 2002 to today. Before then, Turkish education, like other “strategic” issues, was under the thumb of hard-core secularist generals. So, neither an “International Islamic University” would be allowed, nor would the DRA be active in its formation.

Yet, in the AKP’s “New Turkey” many taboos have been broken and new patterns are emerging. The state’s support for religious education — such as “Imam Hatip” schools, or high schools with a quasi-religious curriculum — has dramatically increased. Meanwhile, theology faculties that existed during the pre-AKP era but which were marginal have gained more state support, funding and prestige.

The rise of ISAM, the Center for Islamic Studies, an Istanbul-based institute founded in 1988, is an example of this trend. Under the AKP, ISAM grew, and ultimately was transformed into the May 29 University in 2010. (May 29 is traditionally accepted as the date of the conquest of Istanbul, which was then called Constantinople, by the Ottomans in 1453.) A new, modern and colossal building for the university is being built in the Umraniye district of Istanbul. Notably, as Gormez noted, it is this university that will be transformed into the “International Islamic University” of Turkey.

While this project might be admirable for Turkey’s academic life itself, it is clear that it also reflects an effort to have a stronger voice from Turkey regarding Islam in the international scene. No wonder Gormez mentioned other major Islamic universities in his remarks — such as Al-Azhar University in Cairo, the Medina Islamic University or the Islamabad Islamic University in Pakistan — and added:

It is possible that the AKP government is particularly disturbed by the prominence of Egypt’s Al-Azhar as the main religious authority in the Muslim world, especially after the support given by Al-Azhar authorities to the military coup of July 3, 2013, led by Gen. Abdel Fattah al-Sisi. Erdogan had publicly slammed the grand sheikh of Al-Azhar in a speech in August 2013 for “siding with the coup.”

But will Turkey’s own center of Islamic learning help advance democracy and other much-needed civic values in the Muslim world? If the projected university can be a center of academic freedom, openness and diversity, then yes, of course. Indeed, Turkey does have a generation of qualified and open-minded theologians, who have published important works on matters such as reinterpretation of Islamic law, revitalizing rational thought within Islamic theology and introducing more critical thinking to the Islamic tradition. It has been a pity that their books and articles, written almost exclusively in Turkish, have remained largely unknown to the outside world. If the proposed International Islamic University can help make this Turkish scholarship more accessible to other societies, and create room for more reformist views in Islamic thought, it can make a significant contribution.

Luckily, this is what Gormez seems to have in mind, as he is known to have “re-interpretive” views on Islamic texts, especially regarding hadiths, or the reported sayings of the Prophet Muhammad. (Gormez was, in fact, the head of the DRA’s “hadith project,” which was hailed in the Western media as “radical revision of Islamic texts.”) In his remarks in Mecca, too, Gormez notably said: “Muslims stress external factors [for problems], but refrain from admitting internal reasons,” in contrast to the conspiratorial thought that explains the shortcomings of the Muslim world simply by blaming “imperialists” or “Zionists.”

However, Turkey itself is an intellectual (and political) battleground between the aforementioned rational, reformist views of modern theologians and the more dogmatic, stagnant views of more conservative scholars. Moreover, the latter camp is known to have some weight within AKP circles. One of their controversial efforts was to eliminate required philosophy classes in theology departments, a 2013 decision by the Higher Education Council (YOK), which was fortunately retracted in the face of strong criticism. (I wrote about this controversy in Al-Monitor: “A Salafi Assault on Turkish Theology?”)

Therefore, while Turkey’s International Islamic University is good news, it will be a meaningful contribution to the Islamic world only if it is not dominated by the ultra-conservative school of jurisprudence and theology, of which Turkey has its share. The AKP government should also not frame this school as a mere basis for its short-term political and social needs, but as a long-term project that will help introduce new ideas and fresh perspectives to an Islamic civilization that has been intellectually stagnant for centuries.