What Does Syria Crisis Hold for US, Iran?

The challenges of the Syrian crisis, and how Iran and the United States deal with it, will have a strong impact in the region. 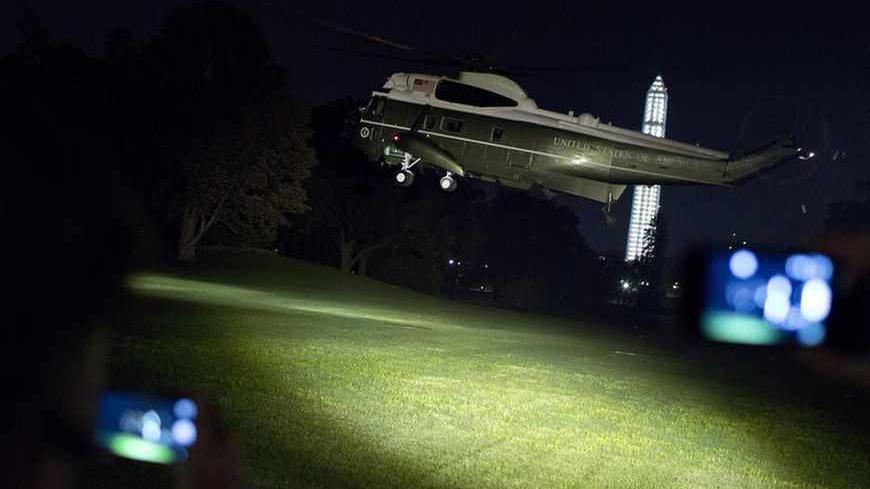 People with mobile phones record the Marine One helicopter while it takes off with US President Barack Obama as he departs for Sweden and the G20 summit in Russia, from the White House in Washington, Sept. 3, 2013. - REUTERS/Joshua Roberts

The question that is often raised these days has to do with how US-Iranian relations and political confrontation will evolve after the expected US surgical strike against Syria. The coming to power of Iranian President Hassan Rouhani, and the new pragmatic, moderate team he put together, mainly with the appointment of Javad Zarif as foreign minister, indicate a willingness for change in Iran. Some would like to argue that his lectionaries were facilitated by the supreme guide himself, who could have obstructed the success of Rouhani, if he so wanted.

Thus, his election, according to this reading, was a message of openness to change on the part of the supreme guide — a policy that aims to end the rigid, highly ideological and confrontational policies of former President Mahmoud Ahmadinejad, which could not have been possible without at least the tacit approval of the supreme guide. The other interpretation of Rouhani’s success considers that it was a normal reaction to the confrontational policies of his predecessor. They were policies, which caused a lot of problems for Iran, mainly in the economic field, due to the sanctions that were applied.

Regardless of which explanation is correct, or the fact that it could be a mixture of the two, there is a readiness in Iran for accommodation with the United States and the West — a readiness that is also encouraged by changes in the Arab world, which will definitely impact the emerging Middle East regional order. Iran has a history of cooperation with the United States, whether open or tacit. This history was based on working understandings concerning Afghanistan. Furthermore, such cooperation was evident in Iraq. Yet, currently, the two countries are increasingly competing as to who will have better influence on their shared friends.

Iran has also witnessed two pragmatic leaders, Hashemi Rafsanjani and Mohammad Khatami, who were willing to strike a deal with the United States, but only on the condition that their right to the atom was maintained, something that commands a wide consensus at home in Iran. Among other things, it is a symbol of pride and of the recognition of Iran’s important regional status. However, the United States had embarked on a confrontation course with Iran. From Tehran’s perspective, the nuclear issue should be on the negotiation table with the United States. It should be part of a list of issues, starting with recognizing Iran’s status as a great regional power.

From the United States' perspective, the entry point to the normalization of relations with Iran is the nuclear issue and Iran’s acceptance of US conditions on the matter. All discussions of the "6+1," as well as the technical discussions between Iran and International Atomic Energy Agency (IAEA), are conditioned by the recognition versus the non-recognition of a role which Iran attaches great importance. Syria, a key Iranian regional card, has become a main source of confrontation between the two.

How Syria tilts will greatly influence the game of power between the two. Syria is increasingly becoming a hostage to this confrontation by proxy. It is important to note that the United States, while planning with Russia and the United Nations the list of invitees for participation in Geneva II on Syria, wanted to exclude Iran rather than acknowledge its role as a key actor in any solution for Syria.

Iran has the capacity and ability, if left on the margins, to sabotage the conference. On the other hand, Israel and many countries on opposite sides of the political spectrum look at how the United States is going to handle the chemical weapons crisis with Syria as a signal of its credibility on Iran acquiring a nuclear capacity.

Yet the surgical strike against Syria, expected to be very limited in time and highly selective in targets, could provide a golden opportunity for a beginning of a comprehensive US-Iran dialogue that would include the nuclear issue. Iran is not expected to react militarily, but only in a rhetorical way, by restraining its friends from taking a course that could lead to escalation, something that is not in the interest of Iran.

Iran expects that it will be invited to be part of the process of taking the more difficult road to Geneva II. This process will take time to launch and will face many difficulties and obstacles because of the strike. Iran must show a policy of restraint if an attack occurs, which will be easy if the strike is very short in duration. It should open up to Saudi Arabia and other Gulf states that are worried by Iran’s radical discourse and actions in the Gulf and Yemen. It must look for cooperation in Iraq with Arab countries rather than seeking to pull Iraq to its side in the ongoing confrontation with the conservative Arab order. Such a confrontation, which is fed by sectarianism, is turning Iraq into a battlefield by proxy, something that could lead to more instability in Iraq.

The United States must also recognize Iran as a regional power to be included in the shaping of a regional agenda, encouraging the latter to steer away from dogmatism and to gradually engage in pragmatic policies, regardless of the official, legitimizing grand discourse. The United States and Western countries should recognize Iran’s right to the atom for peaceful means and finally move to support the establishment of a Middle East free of weapons of mass destruction.

The complexities and the complications of the Syrian crisis will increase with a strike and increase fears that Syria might collapse over time, which threatens the interests of all actors in the Middle East, regional or international, though for different reasons and in different ways. Such fears must be the key impetus for a genuine US-Iran comprehensive dialogue that does not have to be at the expense of others' interests in the region. The future management of the Syrian crisis provides this opportunity, which is in the interest not only of Syria but of regional security and stability.