The accord to destroy Syria’s chemical weapons has marginalized Ankara’s Syria policy while removing the threat against Turkey. 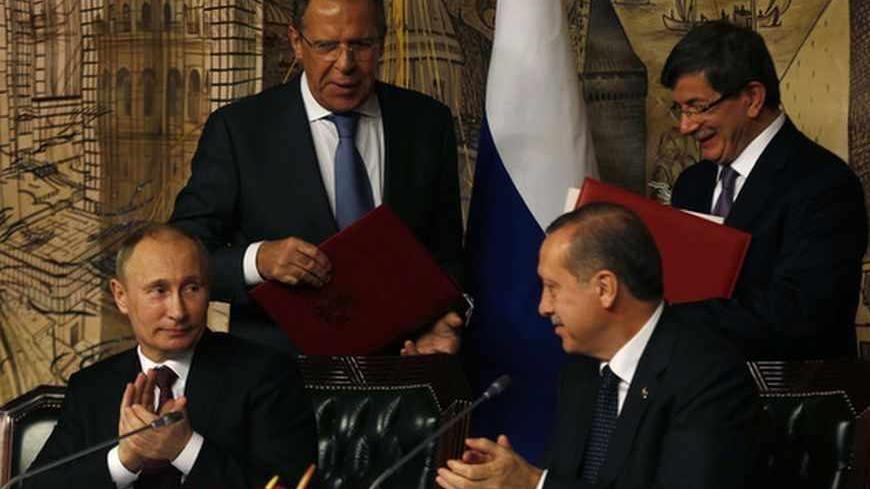 Ankara is not satisfied with the US-Russia accord formulated to eliminate the Syrian Baath regime's chemical weapons. Ankara’s disappointment with the accord — reached on Sept. 14 in Geneva between Russian Foreign Minister Sergey Lavrov and his US counterpart John Kerry — was expressed in a statement made by Turkish Foreign Minister Ahmet Davutoglu that same day.

"Massacres in Syria must be stopped immediately. Those responsible for the chemical weapons attack must be punished. … Of course elimination of chemical weapons in any country is a positive development. We will all be happy with that, but this should not be interpreted as allowing massacres of people without a chemical attack and should not open the way to ignore the responsibilities of those who massacred 100,000 people until now," said Davutoglu.

Ankara was hoping that, after the Aug. 21 chemical weapons attack, a Western military strike under US leadership would go beyond punishing the Baath regime and deterring it from ever using chemical weapons again, but also be a comprehensive operation that would topple the Damascus regime. The picture that emerged was a case of dissatisfaction and disgruntlement.

First of all, with the Russian initiative, the Baath regime has escaped punishment for killing 1,400 people, mostly civilians, with chemical weapons.

Second, and more important, the Baath regime is assured of survival until these chemical weapons are eliminated. The indirect interlocutor of the Russia-US reconciliation is the regime. The only way to keep the United States, its allies and Israel from sending their ground troops to prevent terrorists like al-Qaeda and even Syrian Islamists or jihadists from getting their hands on chemical weapons should the Damascus regime collapse, is to sustain this regime that has promised to destroy those weapons.

Finally, by agreeing to destroy his chemical weapons, Bashar al-Assad has made himself a party to the political solution of the Syrian crisis. Naturally this is completely to the distaste of Davutoglu, whose position had been, "If there is going to be a political settlement, at least it should be without Assad." These are not paradoxes that Davutoglu can easily assimilate.

The irrelevance of the extreme Syrian policy fashioned by Davutoglu and Turkish Prime Minister Recep Tayyip Erdogan, with the ambition of creating a new order in the eastern Mediterranean based on cooperation with Muslim Brotherhood regimes, was proven once more by the US-Russia accord.

Since the fall of 2011, Turkey’s rulers have done everything except send their regular army into Syria to terminate the Baath regime.

If Davutoglu had tried just once to look at the accord not from the perspective of his Syrian policies, but from point of view of Turkey’s security interests, which are already suffering under those policies, he would have been satisfied by the US-Russia accord.

These chemical weapons — the destruction of which will make Turkey happy, as Davutoglu noted — are now threatening Turkey because of its Syria policy. But Syria armed with chemical weapons is not just another country for Turkey.

This is how things stand now: If the US-Russia accord is implemented as expected, Turkey will be saved from the threat of ballistic missiles with chemical warheads, just as the Syrian people and rebels will not be targeted by those weapons again.

Those in Ankara with their unwise Syrian policy created an existential threat to the neighboring regime, but without putting in place national security measures that would cope with the risks such a policy might bring. Turkey does not have a national anti-ballistic missile defense system. At the moment, the Turkish areas of Adana, Kahramanmaras and Gaziantep have limited defensive coverage with six Patriot batteries provided by the United States, Germany and the Netherlands under NATO auspices. The political symbolism of this defensive move outweighs its true defensive nature.

NATO has been able to provide only a symbolic defense for Turkey from Syria. But Russia is eliminating the chemical threat against Turkey in its entirety in return for assuring the survival of the Damascus regime.

From the outset of the crisis, Turkey's calculations neglected to consider Russia and its enormous influence and potential in Syria. It is doubtful whether Ankara fully grasps the real dimensions of Russian interests in Syria. To attribute Russia's interests in the eastern Mediterranean only to security of energy supplies is not a sensible approach.

If we had been able to accurately perceive Russia’s demands and interests, we would have realized that while we were threatening Damascus, we were indirectly threatening Russia. And now it is Russia that has delivered the fatal blow to Ankara’s Syria policy.

With this step, Russia has advanced itself for the first time since the end of the Cold War to a level equal to the United States.

Russia was seeking to regain respectability, influence and the international gamesmanship role it had lost with the collapse of the Soviet Union.

This is the gain that has accrued to Russia in Syria.