Putin: US on Dangerous Course In Syria

Russia may no longer consider the US a reliable partner. 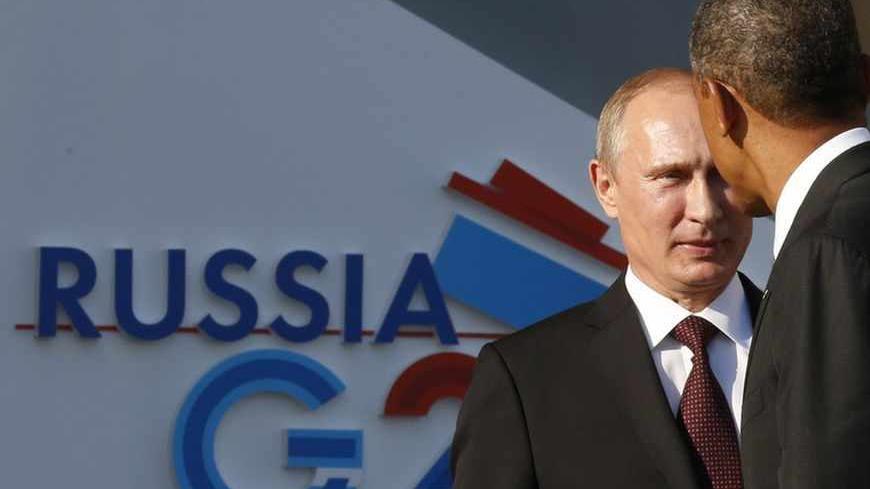 A pattern is emerging: The country holding the presidency of the G20 or the G8 carefully prepares an agenda, discusses it with its partners and puts together a program for the forum. Then something happens that either destroys the plans entirely or, at the least, fouls them up and forces an urgent discussion of the immediate crisis. Lebanon, Greece, Greece again, Libya, Cyprus and now Syria. In the modern world, nothing can be planned. Everything has to be done ad hoc, frantically reacting to events in hopes of guessing right.

Just two months ago, some looked forward to the summit in St. Petersburg mainly as an opportunity to open a new chapter in Russian-US relations. To some extent it was, but in the opposite direction. Instead of a pragmatic attempt to move toward a set of topics for dialogue, firm confirmation arrived that no dialogue exists or is foreseeable. The appearance of Edward Snowden, the fugitive former National Security Agency contractor, forced President Barack Obama to cancel a separate trip to Moscow on the eve of the summit, and the scandal involving the use of chemical weapons in Syria made it pointless to even have a private conversation at the G20 meeting.

Obama will arrive at the forum having announced in advance that a strike will be launched regardless of the position of the UN Security Council and the objections of other countries. It is impossible to imagine a situation in which the US president would take back these words in response to the arguments made by leaders who disagree. Politically, this is simply unthinkable and produces an absurd conversation in which everyone knows there is no chance of changing anyone's mind. So why waste the time?

From Russia’s perspective, everything happening around Syria today is a grandiose propaganda campaign with an incomprehensible purpose, because anyone can tell by looking at Obama how much he does not want to get drawn into another military action in the Middle East. Concepts are being blatantly manipulated: Chemical weapons were used in Syria (which is probably true), so the “red line” has been crossed and therefore a strike must be launched against the regime. It is taken for granted that only the government side could use chemical weapons.

One can assume so, but it would be nice to have even a little evidence. The body of evidence cited by the United States amounts to nothing more than a mantra: We have no doubt that it was Assad. We have incontrovertible evidence. The evidence is secret, of course, but we have it, believe us.

If not for Secretary of State Colin Powell at the UN Security Council and Prime Minister Tony Blair before the Parliament 10 years ago, it would be possible to cite “perfectly reliable” intelligence. After the Iraq precedent, however, this no longer works. Of course, every intelligence service has information that it cannot disclose, but to justify a war, one must provide something, at least the recording of the conversation in which Assad’s officers supposedly discuss the attack. Let the public hear it. There is still nothing but statements, even if they are absolutely definitive and permit no doubt about the regime’s guilt.

Until the last few days, Russia’s reaction to the growing American campaign was relatively soft, much softer than was to be expected given the general state of the relationship. In an interview on the eve of the summit, Putin spoke calmly and even positively about Obama, and with regard to the plans in Syria, he said that Russia might even support strong measures if there is incontrovertible evidence of the Syrian army’s guilt. Of course, this means nothing, because almost any evidence can be seen as controvertible, but still. However, the more the conflict intensifies and moves closer to a war that clearly raises doubts even among many US allies, the more the American political machine will operate in a straightforward and linear way. Public opinion in America and the world must be quickly prepared for the campaign, so the propaganda push will intensify, including accusations that Russia cynically supports the bloody dictator. An explanation is needed for bypassing the UN Security Council.

For its part, Russia will likely turn up the heat of criticism and attacks on the US policy, trying to mobilize important countries – its BRICS and SCO, Shanghai Cooperation Organization, counterparts — that share its view. After the US attack, the political process to organize the Geneva II conference will probably stop, first, because its consequences are unclear and time is needed to evaluate the situation, and second, because Moscow’s desire to work with Washington will rapidly cool.

In Russia, many people are pointing out the surprising shift in the dispute over the legitimacy of using force. Moscow is taking the traditional position — without sanctions imposed by the UN Security Council, it is an aggression. Ten years ago, the United States had bypassed the Security Council in putting together its “coalition of the willing,” but the George W. Bush administration did not pretend that the Iraq War was legal from the perspective of international law.

Now Obama is announcing to the world that he will seek legitimacy for military action not from the international institution, but from his own country’s legislature. In other words, he is treating international and domestic legitimacy as equal, and the vote of the Congress will be seen as an absolutely lawful basis for action. This triumph of unilateralism will happen not under the neo-conservative Bush, but under the liberal left Obama, who has always insisted on the need for joint action in the world arena.

What does all this mean for US-Russian relations? The relationship is going through a strange phase. It is not hostility in the classical sense of a military or political rivalry or an ideological conflict. There is, instead, a growing alienation, a gulf in mutual understanding. In the United States, it seems that almost no one can understand why Russia and President Vladimir Putin have latched on to Syrian President Bashar al-Assad and thus have tried to find rational explanations, like arms contracts. Explanations involving principles of international relations, noninterference and concerns about making things worse are treated with skepticism. Such can’t be taken seriously.

In Russia, in turn, many people sincerely cannot understand what exactly the United States is doing in the Middle East. What does it hope to achieve? Its actions look contradictory and inconsistent. Obama comes across as either a befuddled simpleton or a cynical manipulator. As the discussions in Mexico and Northern Ireland have demonstrated, personal meetings between leaders do not clarify the situation, but quite the opposite.

In Russia, the United States is seen more and more as a source of global instability, made even more dangerous by the fact that its actions are dictated mainly by domestic political considerations and the alignment of forces between the parties in Congress. This is the reason for the desire to neither cooperate with nor resist the United States, but rather to try somehow to avoid it and minimize the risks from its policy. Until recently, the dominant viewpoint among the Russian public was that the United States always knows what it wants and pursues its goals. The aggrandizement of the American strategy found its apotheosis in the popular notion of “manageable chaos” promoted by conservatives in Russia. Supposedly, the United States is intentionally creating total chaos and turmoil in the Middle East so it will be easier to control everything in the muddy waters of never-ending crisis.

Now, of course, a different opinion is more often heard. The Americans are confused. They do not understand what to do, but they see the use of force as the solution to every problem, even when the consequences are unknown. Russia does not know how to work with such a partner. In any case, Putin seems inclined to this point of view.