In his speech to the UN General Assembly, US President Barack Obama described his administration's sometimes contradictory approaches to the Middle East. 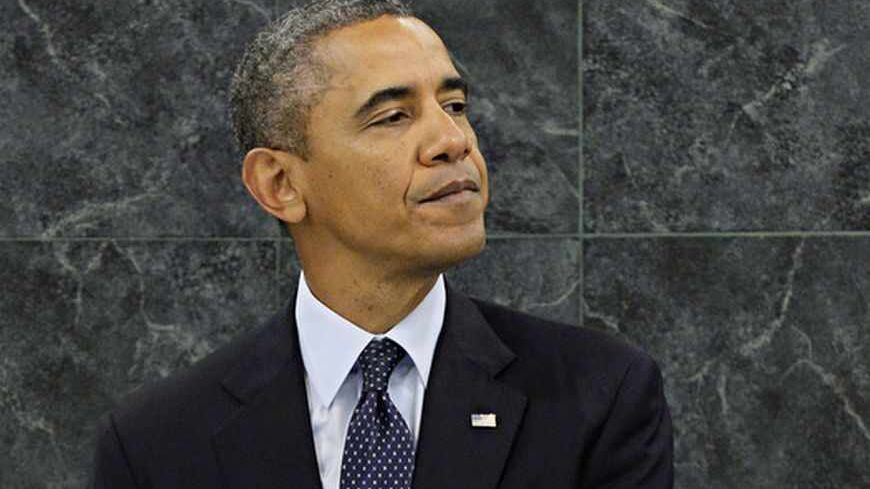 US President Barack Obama gave an extraordinary speech before the UN General Assembly on Sept. 24, one that illuminates the inner struggles of an administration that is being whipsawed by its varying and often contradictory impulses in the region. It is difficult to see who will be reassured by Obama's praiseworthy effort to offer the international community insight into the policy considerations that have produced chaotic, contradictory and frequently maddening policy outcomes across the tumultuous Middle East.

Obama makes the case for an energized US effort in the Middle East at the very moment when, more than at any time in the last seven decades, its power and commitment to the region are being challenged. He offered a skeptical and critical international audience less of an apologia for a string of controversial US actions than a reaffirmation of their essential validity.

“If I had to do it all over again,” Obama seemed to declare on a range of issues from drone strikes to unilateralism, “I'd do it again the same way.”

It would be impossible to conclude from the president's remarks that he is leading a nation in the midst of a self-declared effort to disentangle itself from the costly web of intervention in the broader Middle East and “pivot” to the rising power of China in the Far East or to compare the template for American policy interests Obama explained in unprecedented detail with, for example, the “new model of relations” governing US-China ties announced at the Sunnylands summit in June.

The Middle East, particularly the crises in Syria and Egypt, was the focus of his remarks. Syria and the broader upheavals throughout the Arab world were elevated as symbols of the choices facing the international community and, Obama inferred, tests of its humanity. He asserted, “The world is more stable than it was five years ago,” presumably as a consequence of his achievements. While stated as a fact, it would be more accurate to characterize it as, at best, an unproven assertion. Certainly there are millions throughout the region, not only in Egypt and Syria, who would disagree.

While admitting the self-evident fact that the international community has come up short in its response to Syria's continuing nightmare, his analysis of that country's problem — a struggle comfortably reduced to a battle between the forces of light and those of darkness — offers more heat than light. Obama's Syria narrative is based on an elementary, binary division between good guys (the self-declared, ever-shrinking “moderate opposition”) and the bad guys (the hated illegitimate Bashar al-Assad regime). Extremist groups — one assumes Obama is referring to jihadis, who now dominate the fighting opposition — are mentioned, but only as bit players only modestly intruding upon the larger drama.

Assad is shielded from his just desserts by Russian, Iranian and, yes, even Chinese friends, with their quaint notions of sovereignty. “Principles of sovereignty,” a designing feature of the international system since the 17th century, are reduced by Obama to a temporizing abstraction enabling the slaughter of innocents. Who in his right mind could defend such a principle?

Obama distinguishes himself when he attempts to articulate rules for US and international intervention in the region. He recognizes in an approving fashion that Assad has “taken the first step” by giving an account of its chemical weapons arsenal and confirms that a deal on chemical weapons “should energize a larger diplomatic effort to reach a political settlement within Syria.” But he bluntly declares that failure by the UN Security Council to enshrine the US-led demand for a “strong Security Council resolution,” that is, one that enables the use of force in Syria, “will show that the United Nations is incapable of enforcing the most basic of international laws.” Harsh words indeed for a self-professed internationalist who in a toast to UN Secretary-General Ban Ki-moon soon after this threat, praised the heroic UN “spirit that we need the cooperative effort of the whole world.”

Notwithstanding Assad's cooperation on chemical weapons, Obama goes on to insist, “The notion that Syria can somehow return to a pre-war status quo is a fantasy. It’s time for Russia and Iran to realize that insisting on Assad’s rule will lead directly to the outcome that they fear: An increasingly violent space for extremists to operate.”

Obama doesn't say what elements of the pre-war status quo are a fantasy. Assad's continued rule, it seems. Or perhaps also the territorial integrity of the state? How does Washington reconcile opposition (sort of) to Assad with grudging support for the system he leads?

Furthermore, is Obama threatening Russia, Iran and China, for that matter, when he notes that in the face of their continued support for “Assad's rule” — and what exactly does that mean? — the United States will support an imploded Syria in which jihadis will dominate?

It is not only the axis of evil and its supporters that see value in the current Syrian system, if less so Assad himself. Washington's ally Israel believes that Assad will be around for a long time, and that this terrible outcome is nonetheless better than the options that Obama appears to support. Obama prefers to ignore rather than address such complexities, which form the heart and soul of Syria's death spiral today.

Obama himself acknowledges that “the Syrian people can’t afford a collapse of state institutions, and that a political settlement cannot be reached without addressing the legitimate fears and concerns of Alawites and other minorities.”

Ah, yes. Support for which state institutions remains the key, but how to reconcile this objective with the ouster of the Baath regime? Obama is not the only one searching for this golden mean.

He suggests that if the Arab world fails to improve its democratic, egalitarian non-sectarian bona fides, the United States will be “far more likely to invest our energy” elsewhere.

Well, of course. Who wouldn't? But foreign affairs does not often produce such simple, attractive options and certainly will not in Syria or Egypt anytime soon, if ever. Obama must reconcile himself to operating, more skillfully than he has thus far, in environments where no such golden options are available. He must also convince a skeptical American public that it is worth the investment.

Not infrequently during his speech, there appeared to be more than one Barack Obama at the podium. Obama #1 cites former President George H. Bush's Gulf War as a prime example of the US commitment to protect its “core interests” in the region. Obama #2 asserts the binary view that the United Nations can either be part of the solution that Washington supports or part of the problem — a choice more reminiscent of the radical narrative proffered by George W.

His primer on US interests in the region offers anxious Americans, among others, a unique insight into how the president views this critical part of the world. He reaffirms a US intention to use force, unilaterally if necessary, in an effort to “secure core interests” — access to energy resources, deterring and defeating external aggression and battling terror and the development or use of weapons of mass destruction.

Syrian misdeeds in this arena are described as a “threat to [US] national security." Yet in another forum, Obama has suggested something different, and for Syrians, far less menacing.

“I think what the Iranians understand is that the nuclear issue is a far larger issue for us than [Syria's] chemical-weapons issue, that the threat … against Israel that a nuclear Iran poses is much closer to our core interests. My suspicion is that the Iranians recognize they shouldn’t draw a lesson that we haven’t struck [Syria] to think we won’t strike Iran," Obama said in an interview on ABC on Sept. 15.

It is notable that Israel and the larger issue of the Israeli-Arab conflict did not feature explicitly in this key policy agenda. Obama's treatment of ongoing negotiations is bloodless and formulaic, reflecting the president's own limited expectations. In contrast to “core interests,” the Israeli-Arab arena and a much-anticipated rapprochement with Iran are described as substantial but lesser policy objectives.

Obama continues to slice the US hierarchy of interests even further when he notes an “overriding interest” to encourage a popular democratic government in Egypt. Yet Obama himself betrays the secondary importance of this effort when he notes that the United States supports a "constructive relationship" with the generals running the country, because of their support for yet another “core interest” — the Camp David Accords with Israel. What happens when Obama's “overriding interest” in a democratic Egypt collides with the “core interest” in maintaining the Egyptian-Israeli peace? Obama acknowledges what Gen. Abdel Fattah al-Sisi knows what deposed president Mohammed Morsi discovered to his dismay: “The United states will at times work with governments that do not meet, at least in our view, the highest international expectations, but who work with us on our core interests.”

Henry Kissinger, the dean of the “realist school," could not have said it better. This formulation would appear to be self-evident except that Obama evidently felt it necessary to confirm that Washington does still practice realpolitik. This leaves a lot of room for Assad and Sisi, or at the very least the systems that they head.

Obama, nonetheless, has difficulty accommodating this fact. The plaintive voice of the Rwandan genocide echoes passionately and insistently in the White House, tormenting those among Obama's advisers who were party to US inaction two decades ago. Obama wants to make foreign policy choices according to the desire to be on the right side of history. This, however, is not a self-evident standard.

International affairs is usually a messy business, with few truly good choices on offer. What happens when there is no “right side” to chose, when all options are bad, when the moral choice is ambiguous? These are the options most often confronted by policymakers in the real world. Obama in his remarks has offered insight, but no solid guidance, into the choices he will make.