It may be time to "think big" about addressing the Arab-Israeli conflict. 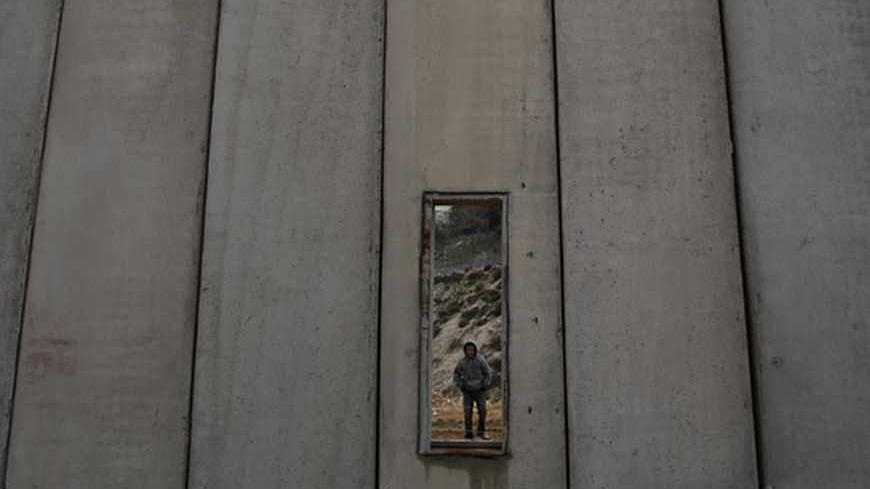 A Palestinian boy is seen through an opening in Israel's controversial barrier in Shuafat in the West Bank near Jerusalem, Feb. 17, 2009. - REUTERS/Baz Ratner

If Russian President Vladimir Putin and US President Barack Obama can manage to work together on Syria — and rid the country of its chemical weapons stores — why shouldn’t a cooperative superpower approach to Israel and its conflict with the Arabs be next? If Washington and Moscow can establish common ground on Syria’s nonconventional arsenal why not agree upon a revived Geneva process — the one convened in 1975 — to settle the Israel-Arab conflict?

Closeting Syria’s chemical weapons may whet an appetite to “think big” across the wide canvas of the Middle East and encourage both Obama and Putin to summon the will to jointly address at long last Israel’s prodigious chemical weapons and nuclear arsenals. In such an environment, Israeli Prime Minister Benjamin Netanyahu may have reason to reconsider his tough line against Assad and his support for superpower intervention to address Syria's chemical weapons program. His former national security adviser, Giora Eiland, explained to Israel's army radio on Sept. 10 that “real moves to dismantle [Syria's] chemical weapons is no small thing. For us, it is a good result without having to do anything.”

Yet, Netanyahu may discover to his dismay that his wish may come true. In that case, not only Syrian President Bashar al-Assad will pay a price. So, too, may Netanyahu and his dream of a nuclear-armed "Greater Israel" strategically dominating a region in conflict, from Morocco in the west to Pakistan in the east.

Good things can happen when great powers cooperate. That is the message that increasingly — if tenuously — defines key regions of the Middle East today. In the wake of the progress made by Moscow and Washington, Assad has embarked on a charm offensive courtesy of the US media. In a not unrelated arena, Iranian President Hassan Rouhani and Obama are sending not-so-secret, encouraging missives to each other. These are not the only signs of the alluring potential for a dramatic transformation in a region that only a few weeks ago was anxiously awaiting the United States' armed entry into Syria's war.

It is far too early to pronounce an end to the cold war between Obama and Putin. Skeptics of the the much-praised, ambitious agreement on Syria’s chemical weapons arsenal could yet win the day. Tomahawks made in the United States might once again grace the skies of the region. The current fragile era of good sense might prove fleeting — a hopeful peak in what has otherwise been a long bumpy road along the bottom. But for the first time in recent memory, Moscow and Washington are putting pieces into place that have the potential to move Syria — and not just Syria — away from a seemingly inevitable trajectory of escalating violence and war.

When great powers start to arrange affairs of state between themselves the world follows their lead. Some do so by choice. Others must accommodate the choices made for them by powers greater than themselves. For Obama, and certainly for Putin, the taste of successful application of power can be an aphrodisiac, broadening the horizons of possible international action and spurring the imagination of policymakers to attempt what they have long hesitated to do.

These “birth pangs of a new Middle East” — one built upon diplomatic agreement rather than on the ruins of Lebanon — might affect Israel and its multifaceted disputes with the Arabs in two related spheres. First, from Israel's earliest days as a state, its leaders have viewed great power rivalry in the Middle East as an opportunity to promote Israel's interests — from the race between the Soviet Union and the United States to recognize the new state in 1948 to the stalemate following the June 1967 war and the creation of an Israeli nuclear weapons capability under a US Cold War security and political umbrella. In contrast, Israel has always feared superpower collaboration — joint efforts that have constrained Israel's territorial and strategic ambitions. Witness the forced retreat from the Gaza Strip and Sinai after the “tripartite aggression” against Nasser in 1956. Similarly, international conferences reflecting superpower collaboration — the Geneva international peace conference model established in the wake of the Yom Kippur War (October 1973) comes to mind — reduce the space for Israel (and Arabs as well) to exploit great power rivalries for their own purposes.

Just as the parties have compiled a compelling record of their inability to resolve their problems on their own, the United States has also demonstrated that, left to its own devices, it is unable to muster the commitment if not the energy to lead the parties to an agreement that addresses the interests not only those of the protagonists but also those of the United States and the broader international community. Today, even the promoters of the ongoing negotiations between Israel and the PLO are reluctant to raise expectations of an agreement that is manifestly in the interests of all parties. The notion of permanent occupation and the end of the prospect of Palestinian sovereignty — except in Gaza — is being reluctantly embraced by many as the most probable option on offer, almost half a century after Israel itself decided to choose this path. The best opportunity to challenge these defeatist notions and revitalize expectations of ending the conflict may rest on the broadening shoulders of US-Russian cooperation.