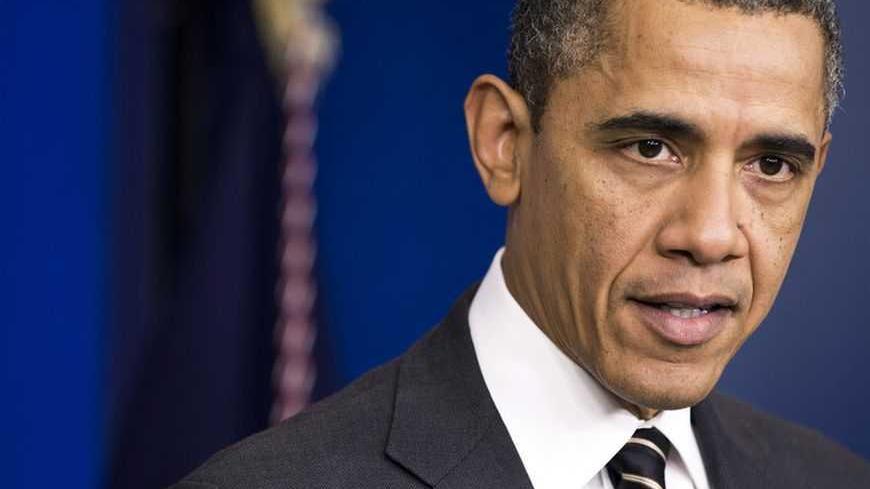 U.S. President Barack Obama calls on Congress to pass a small package of spending cuts and tax reforms that would delay the larger, automatic "sequester" cuts from going into effect during an announcement in the White House briefing room in Washington Feb. 5, 2013. - REUTERS/Joshua Roberts

The Oxford Dictionary defines the word “pivot” as “a movement in which the player holding the ball may move in any direction with one foot, while keeping the other (the pivot foot) in contact with the floor.”

In other words, even as you move in a new direction you don't abandon your existing position. This strategy makes good sense in the field of international diplomacy as well as on the basketball court. The term has been popularized by the Obama administration's intended reallocation of military and diplomatic resources to the Far East to address the rise of China, but it is also offers an instructive window into Washington's policy on Syria, where Washington is learning the hard way that it makes good sense to look before you leap.

Washington's policy toward Damascus was crafted in the heady days of the Arab Spring, when the breezy narrative of dramatic, decisive and relatively painless change captured the Western imagination. Toppling dictators — as in Tunisia and Egypt — appeared miraculously easy, almost painless, and was all for the good.  This assessment obscured more than it clarified about the nature of the changes in these places, and in Egypt in particular, where the power of existing security institutions was enhanced by removing President Hosni Mubarak from the apex of the pyramid of the deep state.

In Egypt, even as it embraced change, Washington maintained ties with existing sources of power. Almost without knowing it, Washington was pivoting on the Arab spring. Where it did not, as in Libya and Syria, there was no relationship with the regime and its institutions to protect. In both cases, it has preferred to lead from behind.

But Libya as we all know, is not Syria. Cleaning up the mess that is Libya today and building a state out of its disparate fiefdoms is proving far more difficult and costly than the destruction of the old order. The one-size-fits-all sentimentality about the Arab Spring has proved a trap for those who think in a seamless and progressive march of history. They forget that Rome, a world capital with a million residents at the beginning of the last millennium, had been reduced to a small provincial village in the 13th century. The march of history all too often leads to a murderous dead end.

President Barack Obama’s Syria policy is framed by two statements almost eighteen months and tens of thousands of Syrian deaths apart. During that time we have all come of age. The bloom has come off the Arab Spring, which has proved to be far more complex and ambiguous than expected. In Syria, the army has not faltered. The regime remains intact. Civil society has splintered along sectarian lines. War has endangered not just the regime but the state itself.

Little of this was understood or even imagined in Washington when Obama declared on Aug. 18, 2011, that Bashar al-Assad had to go in order to redeem the Syrian promise of the Arab Spring. “We have consistently said that President Assad must lead a democratic transition or get out of the way. He has not led. For the sake of the Syrian people,” the president declared, “the time has come for President Assad to step aside.”

Obama's declaration set the gold standard for the opposition, fractured as it was, and still is, by sectarian, political and personal rivalries. No Syrian could demand less than the American president. Obama tipped the scales in favor of a entirely coercive strategy centering upon removal of the regime, without really defining what that meant or the mechanism for achieving it. Setting such a standard and leading from behind proved a lethal combination. It preempted efforts to forge a diplomatic resolution, which would necessarily require negotiating with the regime, while setting limits on U.S. military support for Assad's ouster that resulted in, at best, a punishing stalemate that has put the viability of the state itself at risk.

This ill-conceived strategy sadly underestimated the staying power of the regime and placed too much faith in the self-executing narrative of the Arab Spring. It was hostage to the Russian refusal to be shamed and bullied into doing the right thing. As the strategy turned into a frenzy of death and misery that echoed throughout the region, the administration has been forced to clarify its objectives, including a national U.S. interest in the maintenance of the integrity of the Syrian state and its basic institutions including the security forces.

Soon after re-election Obama explained that Washington will not support an expansion of existing military efforts to topple the regime: "In a situation like Syria, I have to ask: Can we make a difference? Could it trigger even worse violence or the use of chemical weapons? What offers the best prospect of a stable post-Assad regime? And how do I weigh tens of thousands who've been killed in Syria versus the tens of thousands who are currently being killed in the Congo?"

The Congo standard for U.S. intervention closes the door on the  strategy announced by the president in August 2011. In its place a far more sober and nuanced effort is unfolding, one that retains the prospect of harnessing Washington’s considerable power in support of a diplomatic outcome. This is not leading from behind, nor is it a a policy of simply arming the opposition, or winking at those who do.

Obama has evidently tired of waiting for others to do the self-evident “right thing.” Washington remains as committed as ever to a democratic transition that results in Assad's departure, but it has now opened the door in support of negotiations with all parties to achieve it. In the past, the suggestion that Assad was prepared to lose an election in 2014 could not be made in polite company. No longer. This change does not insure success, but at the very least it helps to establish a formidable and broad-based diplomatic counterweight to the killing.

Washington's pragmatic reassessment is not occurring in a vacuum. Leading members of the Syrian opposition and the government itself have made conciliatory statements in support of a diplomatic engagement. Moscow and Tehran have also added their voices to the chorus.

Obama's Congo standard however carries a more ominous message. Millions have died in the heart of Africa. There has been no pivot, where interests are defined and protected as part of a new order. The Congo has been abandoned to its fate. Woe to Syria if Obama treats it as he does the Congo.