Geoffrey Aronson writes that the sectarian agenda of Qatar, Saudi Arabia and Turkey in Syria is really about a "'Sunni restoration" in Iraq. 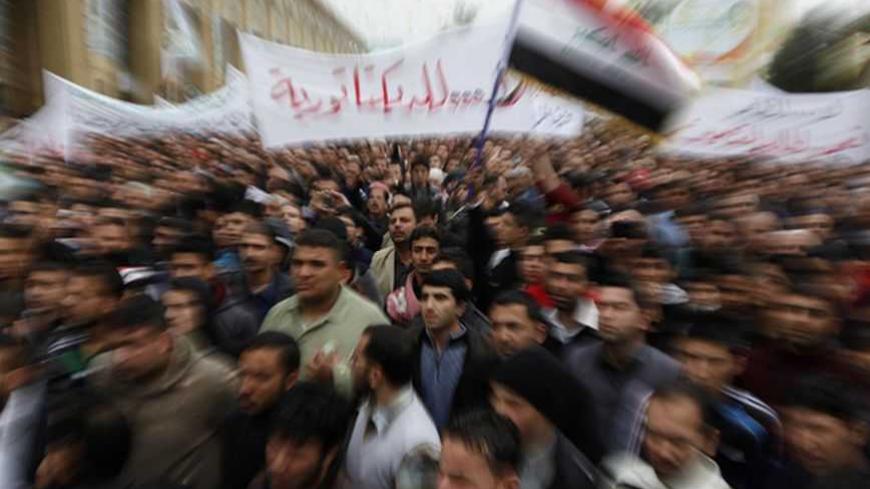 For many of those battling to determine Syria's future, the real prize to be won is not Syria, but Iraq. For foreigners of all persuasions — Arabs who have descended upon Bilad al-Sham from all corners, jihadis and Salifis aplenty, Iranians, Turks and assorted querulous Westerners — it is the sectarian identity of Baghdad rather than Damascus that hangs in the balance. Syria today is not a war by proxy, but something far more complex. The struggle for Syria is a way station rather than a destination, signifying the undoing of the largely successful effort by Hafez al Assad to re-establish Damascus as a strong, independent actor rather than as an object in the schemes and dreams of others.

Foremost among these dreams is the restoration of Sunni supremacy in Iraq. Turks, among others, lament that for “the first time in a thousand years,” Persians rule in Baghdad. It is no secret that Saudis blame Washington for Iran's empowerment in Baghdad — a once-in-a millennium event. They recall only too well their unprecedented warning to the Bush administration to put aside any plans for a military campaign against Iraq. In 2002, a year before the US invasion, The New York Times reported that “at nearly every stop in the Arab world, [US Vice President] Richard Cheney has been cautioned against US military action to topple Hussein. The warnings were made in news conferences, press statements or, in the case of Saudi Arabia, in several television interviews that were broadcast on the eve of Cheney's visit.”

"I do not believe it is in the United States' interests, or the interest of the region, or the world's interest to do so," then Crown Prince Abdullah told ABC News. "And I don't believe it will achieve the desired result.”

As we all know, the subsequent US campaign was a triumph. Saddam and the Baath were quickly dispatched, and Iraq began an era of sectarian American-engineered harmony led by a newly powerful and benign Shia majority. Not!!

Syria cannot today be understood without reference to Iraq's blood-soaked history and the opportunity many see in Syria to right the historic wrong that was done in Baghdad. Riyadh is still smarting from its misplaced deference to US assurances about Iraq. The current Saudi leadership, foremost among the Arabs, is determined not to be led down the garden path yet again by deferring to an uncertain American policy in Syria. They are determined not to forgo the opportunity to unseat the Alawis in Damascus and, in so doing, turn the Arab tide against Shia rule in the Mashreq.

Fearful of the consequences of permitting Washington to lead from behind, Saudis and Qataris are pushing Washington from behind — to support  their sectarian agenda or to stay out of the way. As a consequence, from the first days of Syria's troubles, they have been ahead of the policy curve. The “half men” of the Gulf reject any compromise with Assad and have reserved money and arms in support of the sole option — a brutal end to the Assad regime, if not its Sunni leadership — leaders such as  Manaf Tlass and former Prime Minister Riad Hijab, who not too long ago formed its backbone. Failing that, it is enough to see Syria under Assad descend into the kind of chaotic penury that increasingly defines life in the country — and that at the very least will exact increasing opportunity costs upon Assad's friends in Baghdad and Tehran, and embolden their friends in Anbar and elsewhere. The latest statements by Saudi Foreign Minister Saud al-Faisal that an Assad role in a negotiated transition is “inconceivable” should be seen in this context.

For those looking to tip the scales against Baghdad, victory in Syria need not be complete — the regime need not fall — in order for the policy to redeem itself. The current situation, unbearable to many as it is, also signifies an achievement: weakening Damascus also weakens Baghdad.

The Arabs are not the only ones casting a longing eye toward Baghdad and a jaundiced one toward Washington. It is no secret that Turkey is none too happy with US policy in Iraq and the support that it provides to the Maliki government. Turkey now finds itself in the incredible position of supporting the aspirations of the Kurds to export oil independently of Baghdad, in the face of Washington's opposition. The Iraqi prime minister, in Ankara's view, is determined to claim the entire country, by force if necessary, a strategy that Ankara argues places the territorial integrity of the country as a whole in great jeopardy. Assad's increasingly sectarian agenda is a mirror image of Maliki's (and Iran's) strategy in Iraq.

Yet while Arab opinion appears solid in support of the absolutist Gulf strategy against Assad, Turkey's prime minister, Recep Tayyip Erdogan, and the AKP are feeling the pressure of public opinion to moderate policy. The prime minister remains adamantly opposed to recognizing the legitimacy of an Iranian role in Syria and more determined than ever to weaken the sectarian regime in Baghdad. But Turkey appears to be walking back the non-negotiable elements in its Syria policy toward the more nuanced, achievable objectives of re-establishing stability and public order, without Assad of course.