The Iraq War Is Not Over

Geoffrey Aronson writes that while the Iraq War may have ended for Americans, sectarian regional wars are being fought there and in Syria. 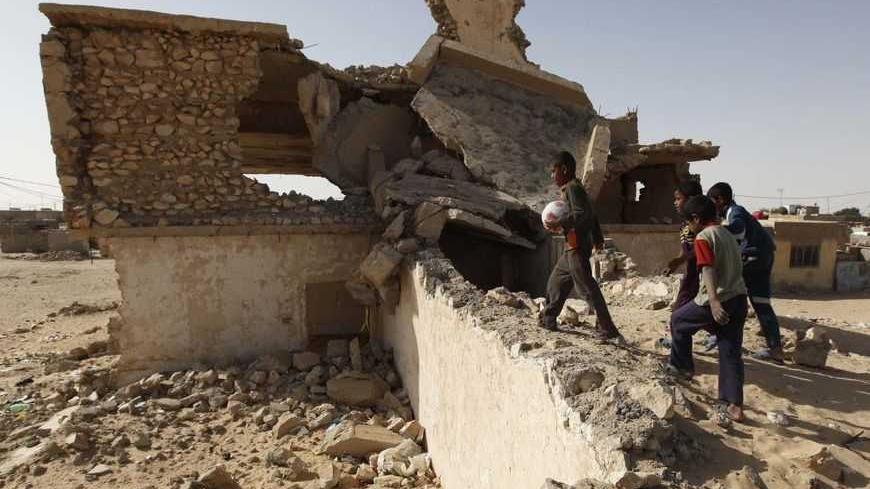 Iraqi boys walk near the ruins of a building, which residents and officials claim was bombed during the 2003 Iraq War, in a desert south of Samawah, March 14, 2013. - REUTERS/Mohammed Ameen

The Obama administration, together with the American public at large, would like to think that the United States has closed the door on its bloody adventure in Iraq. The March 19 statement marking the 10-year anniversary of the U.S. invasion by Defense Secretary Chuck Hagel, that “the war has been brought to an end,” reflects this myopic, if widely held, view.

Hagel’s modest and subdued remembrance at the Pentagon offered a marked contrast to the sickening “bring it on” bravado that characterized the Bush administration's destruction of the country.

A recent tally by the Costs of War project at Brown University's Watson Institute for International Studies counted 190,000 deaths directly attributable to the decade-long war and a cost to the United States of $2.2 trillion. These extraordinary sums, however, only offer a glimpse into the horrific costs of a generation of conflict that, notwithstanding the American retreat, continues to consume Iraq to this day.

Not one voice has been raised during the Arab Spring — from Marrakesh to Aleppo — in any kind of call to emulate the Iraqi example championed by Washington.

Bashar al-Assad himself used to confidently invoke the mayhem in Iraq as a precedent that no Syrian would dare risk repeating. Civil societies in the Arab world that are today finding their voice view Iraq's experience as a dire warning of what to fear if things go terribly wrong.

Washington was not the only one marking the 10-year anniversary of the war.

American soldiers may no longer be dying in the country, but such a standard obscures more than it clarifies about the ongoing struggle in Iraq and the widening destruction of the old order throughout the Arab world.

The sectarian struggle for supremacy that the American invasion unleashed remains the most dynamic and destructive characteristic in Iraqi life and politics today, and its malignant influence now dominates the calculations of nations and peoples throughout the region. Hagel can no more pronounce the war over than he can deny the continuing destruction of ruling institutions that threatens to consume the entire region.

One does not have to be Clausewitz to see, in a description that appeared recently in these pages, the “strategic insanity” of past U.S. efforts in Iraq and Afghanistan that are wasting the resources of a generation and sapping American power and influence.

Iraq under Nouri al-Maliki is compounding the strategic debacle that Washington unleashed a decade ago. It has emerged as a committed supporter, along with Iran and Hezbollah, of the embattled Assad regime, even as the sectarian war in Syria finds expression in Baghdad and Anbar, where revitalized al Qaeda-like cadres are increasing their attacks. Local elections in Ninevah and Anbar have been postponed because of security concerns.

Countries on the other side of the sectarian divide — Turkey, and Qatar and Saudi Arabia in particular — are determined not to repeat the detested Iraq model where Washington, in their view, haplessly empowered Iraq's Shia community and Iran. Turkey, Qatar and Saudi Arabia certainly are determined not to see the model repeated in Syria, where no one trusts Washington's commitment to Syrian president  Bashar al-Assad's ouster, or, more important, its ability to engineer such an outcome.

Syria is today the arena where this clash is most clearly in evidence. As in Iraq after its invasion a decade ago, Washington today finds itself isolated in the region's hottest war. No single Syrian party is invested in an American victory, a concept that U.S. policymakers cannot even define, let alone pursue.

"About six months ago, we had a very opaque understanding of the opposition and now I would say it's even more opaque," admitted General Martin Dempsey, chairman of the U.S. military's Joint Chiefs of Staff, before a Washington audience recently.

Dempsey, who had earlier publicized his opposition to Obama's decision not to arm the rebels, described Syria as "the most complex set of issues that anyone could ever conceive, literally."

"I don't think at this point I can see a military option that would create an understandable outcome. And until I do, it would be my advice to proceed cautiously."

The American adventure in Iraq, whose anniversary no one is celebrating, has demonstrated the tremendous and unending cost of hubris as a guide to policymaking. Breezy assumptions formulated without practical foundation and an active disinterest in basing policy on some knowledge of the facts on the ground continue to exact a heavy cost for all Iraqis, and for the United States as well. Caution, an attitude forged by costly experience and the ambiguities of battle, is a far better guide to navigating the perils dominating the region today.