US President Barack Obama's ramping up of military support for the Syrian opposition is the exception to the foreign policy vision he described at West Point. 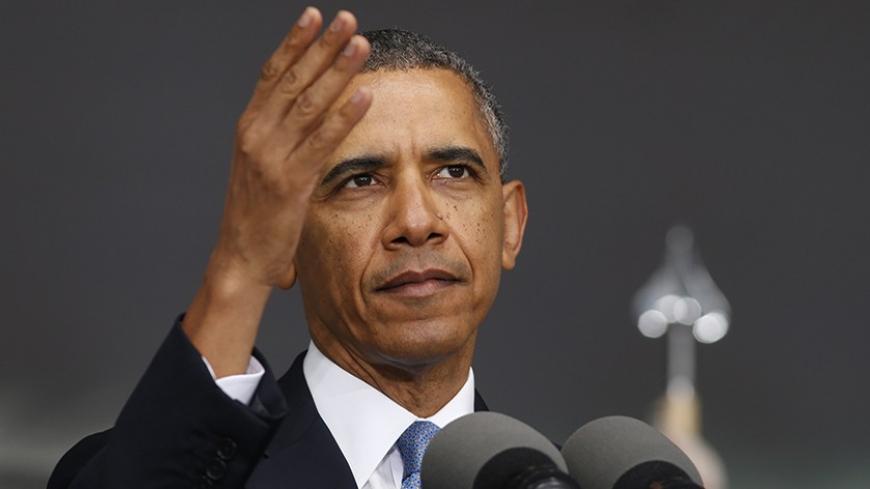 US President Barack Obama arrives for the US Military Academy's commencement at West Point, May 28, 2014. - REUTERS/Kevin Lamarque

Barack Obama has gone to great pains recently to explain the broad moral and policy context of his foreign policy choices for the remaining years of his presidency. Syria stands out, however, as a prominent exception to Washington’s kinder and gentler approach to foreign policy.

The US president's self-declared interest is to close the file on Afghanistan and all that it represents — an ill-considered case of mission creep marked by costly military escalation, counterinsurgency and, at best, ambiguous outcomes. He insists that he has learned something after more than a decade of war in the Middle East and Asia.

“Since World War II,” he explained at West Point, “some of our most costly mistakes came not from our restraint but from our willingness to rush into military adventures without thinking through the consequences, without building international support and legitimacy for our action, without leveling with the American people about the sacrifices required. Tough talk often draws headlines, but war rarely conforms to slogans.”

The president’s views on Syria, however, offer a stark contrast to this hard-won lesson. If the entire thrust of Obama's remarks has been an exposition on the limits of US power, the only option Obama is offering to address Syria’s continuing descent into hopelessness is US-supported military escalation.

Obama told the graduating cadets that it was the right decision not to put US troops in "the middle of the increasingly sectarian war." But it seems that it is OK to add more well-armed and trained Syrians into the mix.

Obama is offering a war-weary American public and more importantly Syrians themselves only a deeper US military involvement in war at the very moment when the dynamics, though still largely military, are moving in another direction entirely.

Obama himself acknowledged in an interview with NPR: “The only way you're going to get a resolution that works for the Syrian people and the region … is going to require some sort of political accommodation between the various groups there.”

Yet, not a word was said in support of the quiet efforts of Syrians themselves to craft solutions to end their agony, or of international efforts to end the conflict through the now-moribund Geneva process that US Secretary of State John Kerry and Russian Foreign Minister Sergey Lavrov have long championed. Obama continued to ignore the Iranian ideas that have piqued the interest of Egyptian diplomats, among others, of basing a solution that starts with a cease-fire, the release of the prisoners, detainees and kidnapped and the formation of a transitional government including the opposition, civil society and the regime in anticipation of parliamentary elections.

Obama served up only one option — more guns to the “vetted moderate opposition” — the latest talisman meant to magically solve the debilitating contradictions underlying US support for President Bashar al-Assad’s jihadi-dominated enemies.

Obama is under no illusion that the US contribution to escalating the conflict will succeed. At the levels policymakers in Washington are discussing, an escalation in US military assistance has no prospect of defeating the regime.

Washington was forced to accept the futility of basing its policy on the demand that Assad go. Some months ago, it even embraced the notion that the institutions of the state, primarily in the security domain, must remain as well. Nor can the military options Obama is considering be expected to achieve the far more modest goal of changing Assad’s “calculation” and compel him to surrender to a stronger and more militarily effective opposition. The overall dynamic of the conflict argues otherwise.

But just as Washington’s declarations about Syria have never been expressions of policy but rather heartfelt aspirations, so too is Obama's latest prescription for an effective US contribution to Syria’s plight.

Obama’s Syria policy is not only out of step with his declared interest in multi-lateral diplomatic approaches to solving conflict. It can be argued that the US effort is also at odds with current efforts of Hezbollah and Iran to reduce their military involvement. There is no doubt that each remains committed, unlike Washington, to win in Syria. But both critical allies of the regime in Damascus, particularly Lebanon’s Hezbollah, have reached the apogee of their military involvement in Syria and see an increasing need to reduce their military footprint.

What, then, is the objective that Washington hopes to accomplish in Syria?

Two options can be deciphered from Obama’s remarks and the practical considerations now underway by US political and military officials to give tangible meaning to Obama’s broad policy outline.

The first relates to integrating Syria policy into a broader counterterror campaign against jihadi everywhere. In his speech at West Point, Obama unveiled a $5 billion program to wage war against them by increasing the capacity of local allies. For months now, US officials have identified the jihadi threat in Syria as the main US concern. Not a day goes by without more disturbing evidence of the jihadi “blowback.”

The president himself acknowledged this, saying, “As the Syrian civil war spills across borders, the capacity of battle-hardened extremist groups to come after us only increases.”

US military support for the vetted moderate opposition may be best understood as a response to this threat rather than the lesser one posed by the regime’s growing power.

Leslie Gelb, a former top State Department official, wrote on The Daily Beast: “Senior administration officials tell me that Obama has been modifying his objective and is now prepared to work with Assad, to some degree, along with the moderate rebels, against what the White House finally has come to see as the real and major threat — the jihadis. These senior officials further say that they expect support in this new policy from previous opponents, i.e., from Saudi Arabia and other Gulf states. Let us hope that this is true.”

Obama’s strategy of tepid support for escalating the conflict by arming and training the “good guys” will at best succeed in prolonging Syria’s agony and that of the regime as well. This represents the most minimal of “achievements.” But if such an outcome falls far short of Washington’s aspirations as well as its self-declared interests, it counts as a major success for the Saudi strategy, which has always been focused on weakening the Assad regime — even at the cost of destroying Syria.