Netanyahu to US: Iran for Palestine?

The Israeli right fears that Netanyahu might agree to an interim arrangement that will include a settlement evacuation in exchange for US guarantees on the Iranian file. 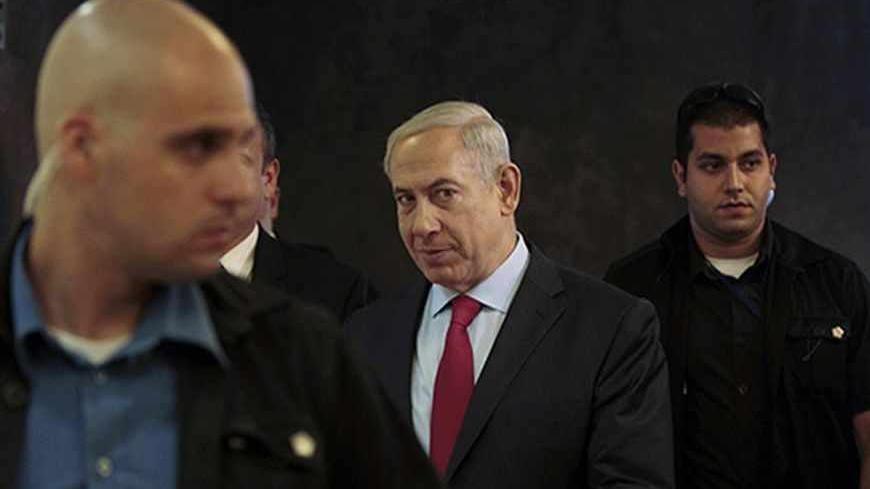 The Israeli right is terrified. The rumor has been going around for weeks, perhaps even months. Ministers, Knesset members, settlers, lobbyists and right-wing journalists have all been murmuring — sometimes loudly — about Prime Minister Benjamin Netanyahu's move. The big plan. The historic abandonment of Judea and Samaria.

Even though he has been serving as the official leader of Israel's right since 1993 — with a short hiatus in favor of former Prime Minister Ariel Sharon — Netanyahu has nonetheless not enjoyed the trust of the hard-core right. These people trust neither him nor his resilience. They are concerned by his low breaking point. They are convinced that under heavy, combined pressure, Netanyahu will have no problem "breaking" or feigning it. They are convinced that this moment is imminent.

Recently, the right-wing core in the Likud Party has been holding frequent meetings behind closed doors during which they exchange information and prepare contingency plans in light of the belief that at some point Netanyahu will "come out of the closet" with an interim arrangement with the Palestinians. This group consists of Deputy Foreign Minister Zeev Elkin, Deputy Transportation Minister Tzipi Hotovely, Deputy Defense Minister Danny Danon, former Israel Defense Forces (IDF) spokeswoman and Knesset member Miri Regev, Knesset member Yariv Levine and other Knesset members. It also consists of ministers, yet they are more cautious. Trying to straddle the sidelines — one foot here another foot there — these ministers back Netanyahu on the one hand, but hold hushed talks with concerned right-wing people on the other, assuring them "to be there for them when this happens."

So what is the grand plan? In broad strokes, its tenets are as follows. This is a plan hatched between the US administration and Netanyahu, with Palestinian knowledge as well as the tacit knowledge of other elements in the Middle East. Its general underlying principle is "Iran for Palestine." US President Barack Obama pledges, by also giving his own personal guarantee, to prevent Iran from acquiring nuclear capability. In return, Netanyahu will reciprocate by awarding him a diplomatic achievement vis-a-vis the Palestinians. We have seen the first step in this direction in recent weeks in the arrangement Obama has worked out to disarm Syria of its chemical weapons. Netanyahu did not speak against this arrangement, partly because he has received US assurances that this will not be a precedent, that the Iranian issue is entirely different from the Syrian one and that the "credible threat" of a military strike on Syria still remains on the table.

Netanyahu is unable to reach a permanent status agreement with the Palestinians. Everyone in Ramallah, Washington, Jerusalem and the settlements knows that. According to the plan, at some point in the negotiations all the parties will have reached this conclusion, and at that juncture the Americans will lay out their alternative proposal. It will consist of a permanent arrangement in phases, beginning with an interim arrangement between Israel and the Palestinians in the setting of which a Palestinian state will be established under temporary borders.

Netanyahu hopes that he will not have to evict any settlements in the framework of this arrangement and that the Palestinian state will be established in areas A and B, which are under Palestinian security or civilian control. The United States will give the Palestinian Authority (PA) guarantees that this is not the final arrangement but rather an interim stage that is limited in time. The issues of Jerusalem, the refugees and final borders will be postponed to later stages. The Palestinian state will be recognized by the United Nations, with the support of Israel, which will withdraw to the separation fence line.

The pressing issue is what will become of the dozens of isolated Israeli settlements across the separation line. As previously published here, Israeli President Shimon Peres has been able to convince the PA President Abu Mazen (Mahmoud Abbas) not to demand the eviction of all Israelis from his territory. Abu Mazen confirmed this in an interview on Aug. 22. Anyone who wants to remain under Palestinian rule is welcome, he said. The belief and hope is that these settlements will not really remain behind the lines, but if they do, they will grow smaller and eventually be abandoned. Israel will enact a generous "eviction-compensation" law, with international funding, and the settlers living in remote areas will converge to the borders of the separation line.

There are quite a few right-wing activists who have heard such explicit details from Netanyahu's associates. In this context, the names of Nathan Eshel, Netanyahu's former chief of staff, and Uri Elitzur, one of the Yesha Council — a settlers' umbrella organization — leaders and former director of the prime minister's office, have come up as having confirmed the plan and Netanyahu's intentions.

"We know," one of Yesha Council leaders told me earlier this week, that "Bibi [Netanyahu] is not Sharon. He will not break up the Likud Party. He won't cause a major shake-up, and he won't be able to evict dozens of settlements. Yet, he will cave in to the heavy US pressure, he has crossed the Rubicon and he does agree to the establishment of a Palestinian state. If he can avoid evicting settlements in the framework of this move, he will be able to keep both the Likud and his government, becoming a leader on the order of Sharon and establishing the Palestinian state."

Is there such a grand plan? It depends on who you ask. Officials at the US consulate in East Jerusalem intimated things to that effect in unofficial talks they have had with Yesha activists. The assessment among many political officials in Israel is that the US administration, under the leadership of Obama and Secretary of State John Kerry, would not have put all the eggs in Netanyahu's perforated basket had they not felt that they have a real shot at success. "They probably know something that we don't," said one of the leaders of the settlements in the territories, "but I think that by now also we already know this."

Will the plan materialize? That is not clear either. Sometimes Netanyahu does reach agreements, but it is only on very rare occasions that he implements them. He tormented former President Bill Clinton at the Wye Plantation until reaching the famous Wye Agreement in 1998 with then-PA Chairman Yasser Arafat. He, however, never implemented it. Netanyahu is a small-time politician who really wants to be regarded as an eminent statesman. He still carries the onus of proof that he has what it takes — the courage, the resolve, the composure and the backbone — to follow through. In recent months, he has shown that he has learned a thing or two over the last few years, leading a careful, calculated Israeli conduct on very sensitive security and diplomatic issues that Israel must contend with. Will Benjamin Netanyahu be remembered in history? Only history will tell.