Turkey Should Shut Down Jihadists on Border

Turkey's shooting down of a Syrian helicopter that violated its airspace on Sept. 16 should provoke a clampdown on all border activity. 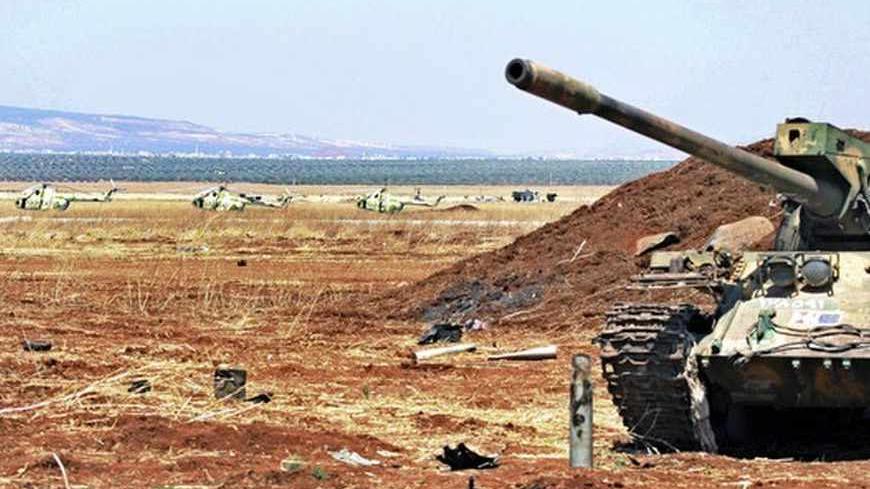 A tank and helicopters belonging to the Syrian army are seen near the Turkish border, Aug. 11, 2013. - REUTERS/Mahmoud Hassano

On Monday [Sept. 16] the Turkish armed forces issued the following statement on its official website: “Unified Control Alert Center (BIKIM) in Diyarbakir identified an M-17 Syrian helicopter at 26 NM [nautical miles] to the Turkish border at 13:41 hours. ... [It] was warned that it was coming close to Turkish airspace ... [even] as close as 5 NM, but it continued to come closer and violated the Turkish airspace by 2 kilometers [flying] at 14,200 feet at 14:25 hours around the Guvecci border station in Hatay/Yayladagi.”

The statement continued, “Accordingly, it was shot by one of the two F-16 aircrafts on patrol duty at 14:27 hours in the Turkish airspace, and it fell down approximately 1 kilometer on the Syrian side.”

Ever since a Turkish jet was allegedly shot down by the Bashar al-Assad regime in June 2012, Turkey’s top leadership forcefully reminded all that the Justice and Development Party (AKP) government had changed the rules of engagement with Syria. As such, Turkish armed forces acted according to those guidelines all within the norms of international law.

Turkish President Abdullah Gul said Wednesday [Sept. 18]: “The Turkey-Syria border is not a border operating in normal order. There is an extraordinary situation there. We announced to the whole world based on the previous security incidents and threat perceptions that our rules of engagement will be active. As a result, this incident occurred due to a border violation. The other side also admits that they crossed the border.”

Turkish Prime Minister Recep Tayyip Erdogan said on Tuesday [Sept. 17]: “We give instructions to our armed forces in certain areas about certain issues. I had previously made statements regarding this issue. 'If there happens to be border violations, the rule of engagement will be activated.' In this incident, there was a border violation by 2 kilometers [1.2 miles]. According to this violation that occurred at 14:25, our armed forces took the necessary action as [the helicopter] did not respond to the warnings.”

Erdogan also expressed his disappointment regarding the deal reached between the United States and Russia last week in Geneva to eliminate Syria’s chemical weapons. “We face a serious disinformation [campaign]. We are all acting upon the use of chemical weapons. More than 100,000 people have been killed in conventional ways. There is an ongoing genocide that the world keeps a blind eye. What do the United States and Russia do?”

Turkish Foreign Minister Ahmet Davutoglu, however, sounded as if he wanted to make this a bigger issue. Although he stated that he does not expect Syria to retaliate, he also invoked NATO’s Article 5, where an attack against one is considered an attack against all.

Davutoglu said: “A criminal and intruder can only be stopped by deterrence. If he feared the international community’s punishment, would he have the courage to violate the Turkish border after throwing barrel bombs 20 to 30 kilometers [12.5 to 18.6 miles] to Turkey’s border? If you are not a deterrent, you lay the grounds for war. This border is also a NATO border. A NATO border has been violated. Turkey has done what’s necessary based on international norms for its national security. NATO solidarity requires cooperation on issues such as this.”

Davutoglu might be referring to the Sept. 17 explosion that took place inside Syrian territory nearly 3 to 4 kilometers [1.9 to 2.5 miles] from the Cilvegozu border crossing, which led to the death of seven Syrians. The authorities in Ankara do not believe there is a link between the helicopter incident and the explosion close to the Cilvegozu crossing.

On the same day, the Syrian regime’s news agency SANA reported that the Syrian military accepted that one of their helicopters was lost on a mission. The report stated that the helicopter "was carrying out a reconnaissance sortie to inspect the infiltration of terrorists across the Turkish borders in al-Younesieh area near Bidama town in Idleb countryside."

Turkey’s political opposition parties chose to take a scrupulous approach to the incident. On Sept. 17, Muharrem Ince, the deputy chairman of the Republican People’s Party (CHP) parliamentary group, said, “Turkey should certainly do as necessary for those violating its border. But Turkey’s borders are not only about its borders in the air. Turkey’s land borders with Syria are totally violated.”

He added: “What does it serve to shoot down a Syrian helicopter while all these other violations are taking place and the peace talks in Paris are underway? Look at the land borders. Armed groups easily come and go through these borders ... You may act on one issue, but what do you do on others?”

When the Syrian helicopter was shot down, Davutoglu was in Paris attending meetings with US Secretary of State John Kerry, as well as their French and British counterparts.

Altan Tan, a pro-Kurdish Peace and Democracy Party (BDP) deputy, said: “The government should declare its foreign policy bankrupt. It prepared itself for an immediate intervention. It dove into an empty pool before anyone. It’s now trying to do something. It’s not able to shoot, break and create an excuse for any military intervention. It can’t do it alone.”

In brief, the opposition is ringing alarm bells that Turkey might have taken a provocative stand against Syria hoping that Assad would fire back at Turkey, which could eventually create a bigger problem than what already is there. It’s no secret that Erdogan is not satisfied with the international community’s response to the Syrian crisis. He prefers an immediate, all-out military operation to end the Assad era. As the deal between the United States and Russia over the elimination of chemical weapons seems to have at the least dissipated a military strike in Syria, an attack against a NATO ally could trigger a different sort of reaction.

That said, it defies logic that Assad intended to attack or provoke Turkey as this would be an invitation a military duel while he has averted a military strike, at least up until 2014, when he desires to hold elections. This may lead to the path of political transformation in Damascus, but it is not easy to be certain of anything at these times. However, Turkey’s shooting down of Syrian helicopter is going to remain an isolated case. And there may be something to explore about Ince and others’ warnings.

Turkey should also abide by its responsibilities as a NATO member country and stop allowing its borders be used by armed groups — including radical jihadist groups like al-Qaeda affiliate Jabhat al-Nusra. There are so many eyewitness accounts of the group's presence along the border, as well as the ease with which the border can be crossed, that it's impossible to deny. No doubt the Syrian issue has paralyzed the international community’s response for various reasons, but it should not lead to a weakness in the fight against fundamentalist jihadist networks. In that respect, it may be time — if it's not already too late — for other NATO member countries to urge Turkey to do a better job securing its border.

The reason is simply this: Many in the region blame the United States and Western countries more than they blame Ankara for the presence of these radical extremist groups in Turkey and how they have come to be the dominant figures in the opposition to the Assad regime. People in the region claim that that is exactly what the Westerners want: to cause more chaos in Syria, then spread the madness to Turkey.

Agree or not, it would be a wise step for all in charge to address the issues on the ground, including people’s perceptions when it comes to NATO member countries’ responsibilities in the fight against terrorism. Ankara may consider the members of these Islamist jihadist groups as lost spirits, but others should know better. It’s the right time for NATO member countries to address the issue of radical extremism and do a better job in coordinating their efforts to fight terrorism. The vagueness in definition as to what constitutes terrorism needs to be clarified so that NATO member countries can better cooperate on this pivotal issue. Deal with it now before it becomes a bigger problem.