Palestinian President Mahmoud Abbas continues to poll well among Palestinians because of a lack of a viable alternative, not due to public affection for his rule. 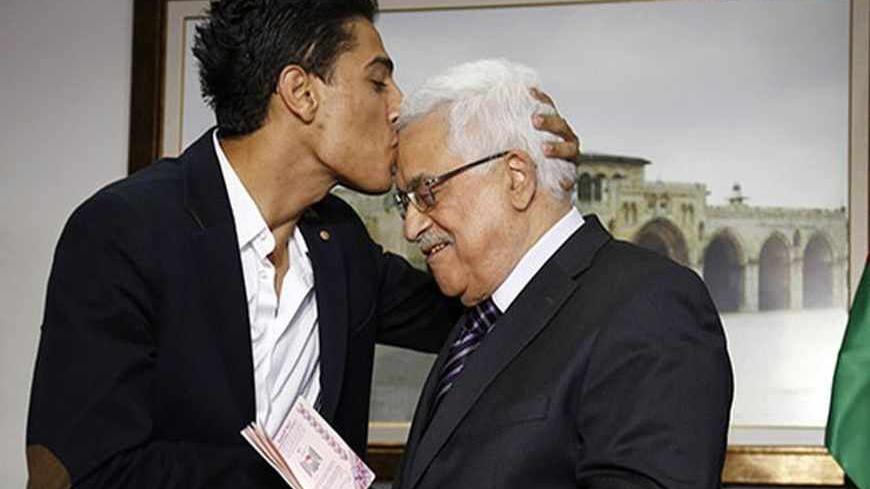 RAMALLAH, West Bank — Mahmoud Abbas, the de facto president of the Palestinian Authority, has been dominant in the Palestinian political scene for more than 20 years. In a column on Al-Monitor on Sept. 9, Daoud Kuttab referred to Abbas as Palestine’s “Teflon leader” and highlighted that Abbas continues to poll well among Palestinians despite regular accusations thrown against him. But such polls may not translate into real public affection for Abbas per se, and may have more to do with the lack of a viable alternative.

As far as political failures are concerned, they are abounding for Abbas. Many believed that the Oslo Accords would herald in a new era of peace and stability, but two decades later, the purpose of the agreements, of which Abbas was a key architect, glaringly depict a process designed to cover Israeli occupation policies, all under the nose of a Palestinian government with limited self-rule and zero autonomy.

Elected as the president of the PA in 2005, following the death of former PLO leader Yasser Arafat, Abbas’ tenure oversaw the political division between Fatah and Hamas, two deadly Israeli military offensives on Gaza — where it is documented that he had previous knowledge of the massacre in the winter of 2008/2009 — and the increase of Jewish-only settlements and settlers alike in the West Bank.

At the same time, the West Bank grew under the illusion of an economic boom, as the transformation of the society into a high-end consumer one and the dependency of Palestinians on loans have mired the population and the Palestinian Authority into colossal debt. The PA’s security forces developed into a sophisticated and widespread force fulfilling the role of the Israeli occupation army while simultaneously suppressing any dissent against the PA and resistance aimed at Israel.

It is the reformation of the political narrative and the absence of a candid oppositional force that explains why Abbas gets away with his strongly worded and controversial statements, such as his adamant opposition to the outbreak of a third intifada and his quotation on having no right to return to his ethnically cleansed town of Safed as a refugee.

In an interview with Al-Monitor, Abaher Elsakka, the head of the Social and Behavioral Sciences Department at Birzeit University, maintains that “popularity” is not necessarily tied to a people’s love for a leader, but to other factors such as the leader’s role as the creator of independence, or the protector of the people’s best interests, or the upholder of internal sociopolitical balances.

“Mahmoud Abbas does not possess the popularity that the late leader Yasser Arafat enjoyed, but there are a number of explanations that clarify why the Palestinian people continue to put up with him,” Elsakka said. “One of them is the stalemate in the Palestinian political arena, and the fear of many Palestinian investors or groups of the collapse of the economy, which depends heavily on foreign aid. Therefore, these groups see it in their best interest to support Abbas politically and economically.”

“More than 200,000 Palestinian families are reliant on the PA for their livelihoods, either through employment at the ministries or the security forces,” he went on, “which through various ways hold large weight in the media and in controlling and convincing public opinion.”

Nizar Banat, a Hebron-based political activist, argues that silence toward the actions of a leader from the population is by no means an indicator of contentment.

“Silence in this case is more of a mark, where people are searching for an alternative from the status quo, or a regional miracle, or war,” Banat said. “Mahmoud Abbas’ popularity is in decline at all levels, but the lack of an oppositional organized front results in a largely silent, hesitant and unsure population. This is also exacerbated by fear due to the instability in Egypt and Syria’s catastrophe to change for the better.”

Banat went on to explain how Abbas used the same methods as his predecessor Arafat to increase the number of yes-men around him, such as the threat to expose influential individuals through money corruption or sex scandals. Abbas, he argued, added another method such as satisfying the interests of the US.

“The regression of the Palestinian left, who are but a shadow of their former selves, and the diverted attention of Hamas and the Islamic Jihad to the Muslim Brotherhood and Syria respectively, has contributed to the general sense of mistrust for any political faction,” stated Banat. “One of the ways in which Abbas has manipulated political division is through strengthening the stronghold that the PA security forces have, which has created a state where outspoken criticism of Abbas is rarely heard outside of the social-media world.”

Challenging Abbas’s stances is difficult due to the hierarchy of control that he uses, according to Hasan Safadi, a journalist in the Jerusalem-based Elia Assocation and an archivist in the Institute of Palestinian Studies.

“From the beginning, Abu Mazen has been able to impose himself and his sovereignty over the West Bank after he disarmed the resistance,” Safadi told Al-Monitor. “This proved that he is able to adjust and control the Palestinian public, which gave him the confidence of the West and Israel as a peace partner and an ally who is able to maintain security.”

What controls the public is buttressing the capitalist economy, Safadi points out, which the security issue has paved the way for by attracting civil society institutions to invest in Palestine.

“Abu Mazen, the ability to regulate the masses through money. The Palestinian Authority through its strong union with the Palestinian capital sector, has resulted in forming a loyal base of supporters to him, in order for them to not go back to jobs that entail physical labor.”

“Furthermore, his policy to create delusional goals once in a while is another way to distract the masses,” Safadi continued, “such as taking up the issue of settlements as an interim goal, to the UN bid for statehood, to using the win of [“Arab Idol” winner] Mohammed Assaf to better the PA’s image. … These events seem immaterial, but they do sedate the public, and give the PA some kind of power legitimacy which shows itself as owning a way forward and a clear political horizon.”