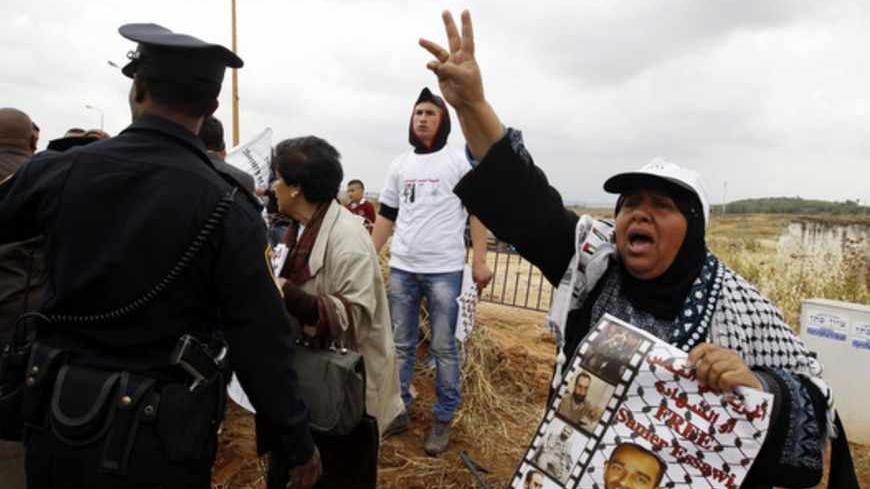 A Palestinian protester holds a placard during a demonstration in support of hunger-striking Palestinian prisoner Samer al-Issawi, outside Kaplan hospital in Rehovot near Tel Aviv April 22, 2013.

A recent report on social media in the West Bank and Gaza Strip found that 40% of the Palestinian population there are active on social-media sites, most notably Facebook. This ranks the two territories as the highest in the Middle East region.

Hanin Taha, a social-media specialist who works with the Spark Media company, said that the annual rate of increase for Twitter users in Palestine in 2012-2013 is the highest of the Arab countries, at an astonishing 232%.

The exponentially increasing rate of social-media users, especially those on Twitter, arose from the need for an alternative discourse away from the mainstream-media narrative when it came to the Israeli occupation. The popular resistance protests in the West Bank garnered more worldwide attention due to activists live-tweeting and updating from the ground about the arrests, injuries and, more rarely, deaths of protesters at the hands of the Israeli army.

Ola Tamimi, a 24-year-old Palestinian blogger from Hebron, says that online activism must be distinguished from on-the-ground activism, lest protests and resistance be solely attributed to modern social technology.

“Social media in Palestine is affected by social media in other Arab countries like Egypt or Tunisia, and their role in what is referred to as the Arab Spring,” Tamimi said. “This effect led many Palestinian social-media activists to either forget or ignore the importance of community mobilization for protests — not every sector of Palestinian society that could be involved in protests is connected to modern social media. As a result, this led to many activities and events called for on Facebook or Twitter to be limited to certain areas with specific people participating.”

In his article titled Using Social Media for Community Organizing in Palestine, Fadi Quran touches upon the assertion that dependency on social media as the only means of activism is faulty, and instead should be regarded as a tool, not a strategy.

“Social media is an instrument that must be harnessed to complement other aspects of disruptive politics, such as acts of civil disobedience and societal empowerment,” Quran wrote. “The central challenge facing Palestinian activists today is learning how to effectively employ these virtual instruments to enhance their efforts on the ground.”

The balance of on-the-ground activism and utilizing social media as a means of dispersing information is important in recognizing that organizing large-scale protests will not be achieved through the virtual world, but through community building and social work. Social-media websites are effective platforms to expose Israeli crimes and the occupation, which is exactly what Mohammad Abu il-Rob, a media lecturer at Birzeit University, did.

“The international media largely ignored the Israeli offensive on Gaza in November 2012,” Abu il-Rob said, “and that is what drove me and my colleagues to launch a campaign on social-media communication sites to expose Israeli crimes through the deployment of Palestinian posts of photos and video ... for international media outlets such as CNN, BBC, Fox News.”

Abu il-Rob points to how the page targeted an international audience to spread awareness about the Palestinian cause and the Israeli occupation to those who had little to no knowledge.

“The campaign widened dramatically with the participation of foreign activists,” he said. “The success of the campaign is that some posts reached more than 200,000 people across the world in the first three days.”

The decision to create a Facebook page and a Twitter account for the campaign came shortly after. The Facebook page is called the Campaign to Expose Israeli Crimes, with the majority of the posts in English.

“We haven’t received any harassment from the Palestinian Authority security forces, especially since our efforts are in English,” he adds.

But for Ola Tamimi, who writes and tweets in Arabic, she received repeated threats for criticizing de facto president Mahmoud Abbas and the Palestinian Authority on both her blog and Twitter.

Tamimi began her blog, Stolen Kharbshat, at the end of 2010 initially to record her day-to-day experiences and the stories of her extended family, some of whom faced house demolitions and life in Israeli prisons. She then began writing about the Palestinian refugees, the Naqab desert, the prisoners, the Hamas government and the “Oslo regime.”

“Anonymous intelligence officers called and threatened me,” she recalled. “They told me that if I don’t stop writing on my blog or Twitter, my brother will be at risk. The second time they called, they threatened to kidnap my brother.”

The cases of 26-year-old Anas Sa’ad Awad from Nablus and the Lebanese-based al-Quds TV reporter Mamdouh Hamamreh also point to increased scrutiny by the PA on social media websites. Awad was sentenced to one year in prison for allegedly photoshopping Mahmoud Abbas in a Real Madrid football uniform, before being presidentially pardoned. According to Awad’s lawyer, the Palestinian court had sentenced him based on an outdated law that was used during its 1948-1967 mandate of the West Bank, criminalizing criticism of the Jordanian king.

For Mamdouh Hamamreh, the premise of his one-year sentencing was even more incredible. Hamamreh was tagged in a photo depicting Mahmoud Abbas next to a character from a popular Syrian drama show. Hamamreh was also pardoned by Abbas.

Abu il-Rob sees social media as a platform from which to wage a cyber war against Israeli propaganda, and in that aspect, has proven to be effective. Yet when it comes to organizing a popular movement or calling out the Palestinian leadership in less-than-favorable terms, the ineptitude of both mobilization and freedom of expression remain hurdles yet to be bypassed.