Yariv Levin, chairman of the governing coalition, has warned Israeli Prime Minister Benjamin Netanyahu of the political price he would pay for striking a historic peace agreement with the Palestinians. 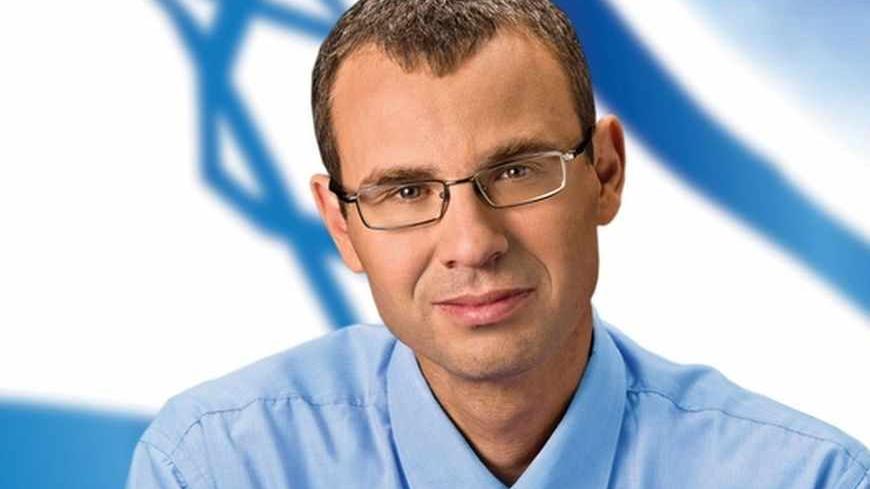 Knesset member Yariv Levin, the chairman of the governing coalition seen here at his Knesset office in March 2013, is opposed to any peace agreement that would involve the evacuation of settlements. - Reuven Kapuchinsky

Knesset member Yariv Levin, chairman of the governing coalition, knows for sure how he is going to act if he discovers that Prime Minister Benjamin Netanyahu is promoting a diplomatic arrangement that includes the evacuation of settlements. He is going to give up his role right away and without remorse — a role that, anyway, has never been his heart's desire — and focus his efforts on torpedoing the agreement. “The prime minister knows that I am loyal first and foremost to the way I believe in,” Levin says in an interview with Al-Monitor. “If, God forbid, a move such as the disengagement [from Gaza in August 2005] is re-enacted, I will not stay in office.”

The Knesset winter session is to open in about three weeks [Oct. 15], and what Levin says aptly illustrates the highly explosive situation Netanyahu is liable to face in the Likud party, if and when it becomes clear that he is headed for a historic diplomatic arrangement with the Palestinians. The prime minister is trapped in a far-right faction, and he will need a lot of courage and mental strength to make a decision that would inevitably lead to the loss of his support in the ideological right.

Knesset member Levin, as chairman of the coalition, do you have any idea about the real intentions of Netanyahu in the revived diplomatic process?

“I don’t know whether he is headed for a diplomatic move. I have no indications to that effect. I am following the developments and my position is clear: We are in favor of holding negotiations — but without any preconditions. So far, the prime minister has stuck to it, with the exception of the release of Palestinian prisoners. What’s more, the final outcome should be the strengthening of the settlement enterprise rather than the surrender of territory.”

In your opinion, is there a chance for a diplomatic move on the part of Netanyahu?

“I assume that the possibility of a diplomatic move on the part of Bibi [Netanyahu] is there. But I also know that he stands no chance of passing such a resolution. And even assuming that, under certain circumstances, Netanyahu will be in a position to muster a majority in the Knesset, once that happens, he will lose his power base in the Likud Party and will no longer be able to serve as prime minister. He will then have to go to early elections.

“Within the Likud faction and among the Likud activists, there is a clear majority against the evacuation of settlements and the surrender of territory — and this, without getting into the fine details of an interim arrangement or a permanent arrangement.”

He may split the Likud …

“It is very difficult to split the Likud today. When [former Prime Minister] Ariel Sharon did what he did [leaving the Likud in November 2005 to establish the Kadima party], he already had a vast following of people who were looking for a party leader. The situation at present is that [Yesh Atid chairman] Yair Lapid has no interest in serving as No. 2, and the Labor Party is not ready to ally with Bibi, under any state of affairs. In fact, I don’t think that he is interested in it himself or that such a move is at all feasible. Yet, we must remain vigilant. Politically, Netanyahu has a solid position in the Likud, and if he pursues his current policy, he will enjoy the backing of his faction, as well as public support. I don’t see what he can gain if he makes a political mistake.”

Do you consider it appropriate that, while serving as chairman of the coalition — a role in which you are supposed to act as the prime minister's confidant — you are also serving as head of the Land of Israel lobby in the Knesset, along with Orit Strock, Knesset member for the HaBayit HaYehudi party?

“To start with, it should be understood that this is our position. The prime minister is well aware of my beliefs, as I openly voice my opinions. I believe that it is also essential to the negotiations. We are actually rendering him a valuable service. He can thus say: ‘Don’t you see, I have problems enough at home? I cannot give up land.'

“I think that the coalition is a means to an end rather than an end in itself, and my job is not just to see to it that the government will survive, but also to try and steer its decisions in the right direction. In the event of a head-on confrontation — if, God forbid, a move such as the disengagement takes place — the prime minister knows that I’ll be loyal first and foremost to what I believe in. If things change, then there will no longer be any reason for me to stay in office. In any event, I agreed to take on the job for a limited time only. It has never been my heart's desire, and it isn’t a secret. Therefore, I am not going to think twice about it, and I will not regret the loss of the job too much.”

It sounds as if you're suffering.

“Life under such a job is intolerable. It is a difficult job in any situation, and it is all the more difficult due to the structure of the coalition and the Likud faction. There is a competition going on for the future leadership, and there are many for whom it is the first term in office and who thus have no experience whatsoever. It is true for all echelons — from party leaders to rank-and-file Knesset members. They are not used to situations of political crisis. True, there has been some improvement since the first session of the present Knesset began, but still, it isn’t a simple matter.

“Nevertheless, we managed to pass the state budget in the last week of the summer session [July 30], as well as the Arrangements Law, the Referendum Law and the Law of Governance, by a majority of 61 votes, without failing in any vote. However, when all's said and done, it’s all too fragile. It isn’t as if the coalition was made of concrete, and it's not going to be a breezy walk through the winter session.”

You managed to pass the budget under unfavorable conditions. Is the difficult part behind you?

“Well, not yet. We are still facing the second and third readings of the Conscription Law, and the same holds true for the Law of Governance and the [so-called] Nation Law. And there are other weighty issues on the agenda, such as the formulation of an immigration policy, not to mention the developments in the political sphere. It is a most ambitious government that we have, which has taken upon itself to address long-forgotten issues.”

Levin, 44, a lawyer by profession, grew up in a family that has deep roots in the Irgun [aka “Etzel” — a Zionist paramilitary that operated prior to the establishment of the state of Israel]. Former prime minister and Likud Party founder Menachem Begin was his godfather at his circumcision ceremony. On top of his agenda, alongside the ideological struggle, and no less significant in his eyes, is the campaign he is waging against the Supreme Court, which, he feels, has been taken over by a radical leftist group. Last week (Sept. 16), after the Supreme Court ruled against the amendment to the Infiltration Law [concerning the detention of illegal immigrants], he once again lashed out against the court, labeling its ruling “a new record of lawlessness.”

Levin expects the upcoming Knesset winter session to be quite stormy as far as legislation related to the judiciary is concerned. Or it may be just wishful thinking on his part.

“The recent ruling by the Supreme Court regarding the infiltrators has escalated the confrontation between the court and the Knesset into an inevitable head-on collision,” he says. “And that's because a new law is called for. We are going to see it as a key issue on the agenda, and it is bound to be a tough point of contention within the coalition. There will be bitter struggles between all parts of the coalition, and it is not going to be easy. We intend to submit a bill that will settle once and for all the issue of illegal immigrants, and we have a long list of motions related to the judiciary, the Basic Law, the nation-state, the attorney general’s authority. These issues will all be on the table with Tzipi Livni in office as the minister of justice, so that it isn’t only in the ideological arena, but in the ministerial one as well that the debate will be waged.''

Do you expect a change in the composition of the coalition?

“No coalition ever managed to maintain its original composition throughout its tenure, so that changes are likely to take place, including, possibly, even a national unity government.” As matters stand, neither Lapid nor HaBayit HaYehudi leader Naftali Bennett has any interest in leaving the government. At the beginning of its tenure, immediately after the election, the general impression, fostered especially by Lapid, was that the two joined the government only to quit in no time. However, it has soon been realized that the prime minister’s job is difficult and complex, and as of now, there is no one who feels that he can replace Bibi [Netanyahu] just like that. On the contrary, it seems to me that deep in their hearts, they know how lucky they are to have this apprentice period. And I am talking about Lapid, Bennett and Livni, whose dreams we are all familiar with.

“Judging by the outcome, the last Knesset session was a real success. We passed some significant resolutions, in the government as well — from the decision on the port reform and the bill on daylight saving time to the two major laws — the Arrangements Law and the Housing Law. It is a long list for a three-month Knesset session. However, in the long run, there is still a great effort awaiting us, and the coalition makeup is quite fragile.”

So, can the prime minister sleep in peace when you are running his coalition?

“That’s something you have to ask him. As for me, I can say that as long as I am there, I am totally committed. Once I feel that I cannot guarantee him my full commitment, Netanyahu will be the first to know. I am not going to take him by surprise.”