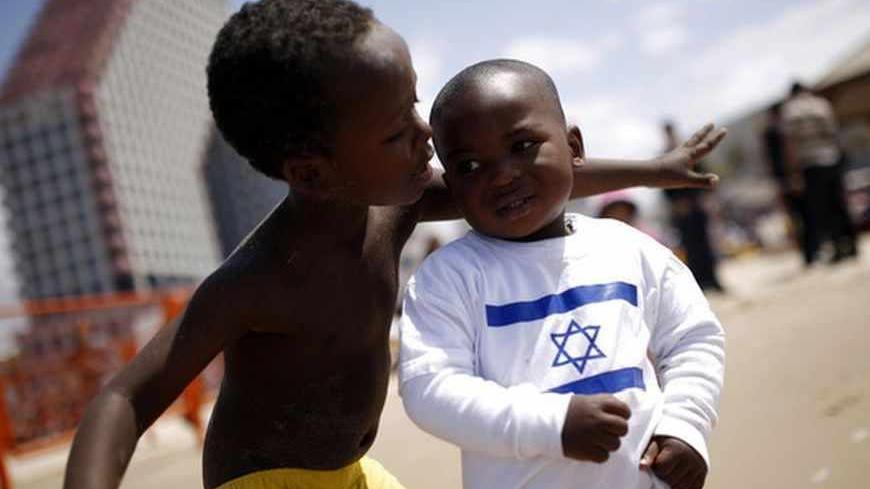 Children of migrant workers play on a beach in Tel Aviv, on Israel's Independence Day, marking the 65th anniversary of the creation of the state, April 16, 2013. - REUTERS/Amir Cohen

Monday, Sept. 16,  was a historic day for Israel’s democracy and respect for human rights. The Israeli Supreme Court unanimously struck down a Knesset law that allows for the detention of migrants for three years without trial. Ruling that this law was unconstitutional, the justices argued that the Knesset’s provision contradicted the basic law guaranteeing “human dignity and freedom” to all. Unfortunately, instead of celebrating the Supreme Court’s brave stance to protect the rule of law, many right-wing Knesset members attacked the court for its compassion toward society’s weakest members.

In the landmark ruling, Justice Uzi Fogelman said that while the ruling will create a difficult task, “We must remember that those who come to our shores … are entitled to the right to liberty and the right to dignity that the Basic Law grants to any person as a human being.” These tolerant words demonstrate the court and Israel’s commitment to ensuring that the African migrants' rights are protected.

Nonetheless, many Israeli Knesset members oppose this courageous decision. Yariv Levin, a senior Likud legislator, wrote on his Facebook page that the court made a “mad decision to turn Israel from a Jewish state into one of all its immigrants.” Ayelet Shaked, a prominent legislator in the Bayit Hayehudi Party, criticized the ruling for harming Israel’s democracy and said, “The high court canceled the wall of defense the Knesset established and once again opened the country’s borders.”

Levin, Shaked and the many other Knesset members who criticize the ruling failed to respond to the contention that holding a migrant for three years without a trial is inhumane. Such an act hardly appears to be a proportional response to the “crime” of entering Israel from war-torn Sudan. Although Shaked claims that the court’s ruling is an assault on Israel’s democratic body, the Knesset, she fails to realize that as in all democracies, the Supreme Court has an obligation to intervene and strike down laws that curtail the rights of minorities and are unconstitutional. The court was justified in preventing the “tyranny of the majority.”

While government officials repeatedly refer to these individuals as “infiltrators” — an inflammatory term — such labels ignore the plight of the African migrants. The thousands of prisoners sitting in Israeli jails include pregnant women and children. International law outlaws countries from deporting asylum seekers. Yet, Israel refuses to check their requests for asylum, not allowing them to work legally, or send money abroad to their families. Human Rights Watch has reported that these same “infiltrators” have often escaped from rape and torture in Egypt’s Sinai Peninsula before arriving to the Israeli border. One Eritrean woman even died when she jumped off a truck, apparently to avoid facing deportation to her homeland and its miserable conditions. It is true that some of the migrants have committed crimes in Israel, especially in southern Tel Aviv. However, it would be unjust for Israel to punish an entire population of 60,000 migrants for the crimes of a few individuals. Furthermore, Shaked fails to understand that Israel is perfectly within its limits to restrict immigration, as it did when Netanyahu constructed a massive fence on the Egyptian border. At the same time, once the migrants have already entered the country, it is unlawful to imprison them for three years without a trial.

Israel’s right-wing members of Knesset often highlight Israel’s unique democratic nature and respect for human rights, in contrast with the autocratic regimes elsewhere in the region. In a recent op-ed in The Jerusalem Post, Likud Deputy Foreign Minister Ze’ev Elkin praises Israel’s vibrant democracy for creating an open society where politicians and citizens are able to freely express their ideas, even if controversial. Nonetheless, in an ironic twist, the same Knesset members who often trumpet Israel’s democracy to leftists abroad rebuff efforts to preserve Israel’s democratic character in the most challenging of cases.

Aaron Magid is a graduate student at Harvard University in Middle Eastern Studies. He is a staff writer for the Jerusalem Review of Near Eastern Affairs. His work has previously appeared in the Daily Beast, Jerusalem Post, and the Forward. On Twitter: @AaronMagid