With musical trends typically reflecting the times of any particular society, Iraqi music today is increasingly characterized by themes of war and violence. 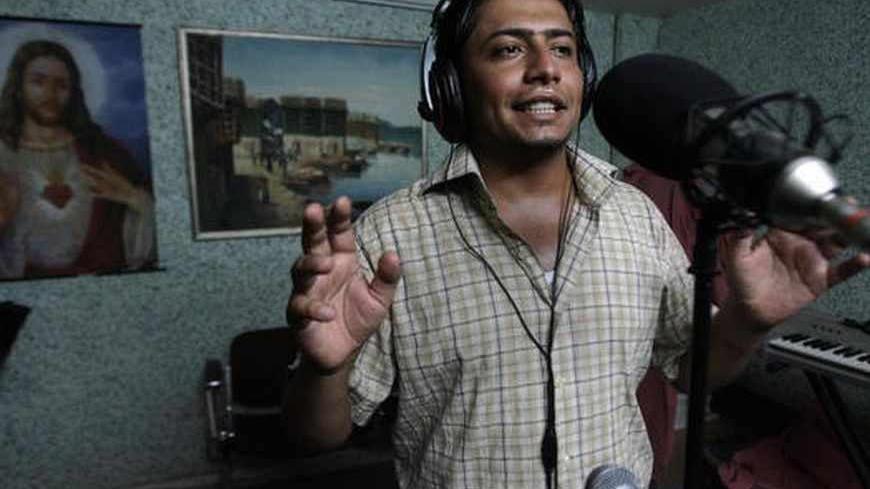 “The singer was standing next to a cemetery, addressing a sad widow who had just buried her husband. He owes her deceased husband money, he says, so he will kiss her, as a settlement!” This is the subject of an Iraqi song that is widely popular among youth. The song has been harshly criticized by intellectuals and the Iraqi people for satirizing death and its inappropriate lyrics.

This song is no exception. For years, this style of song in Iraq has become more aggressive in terms of its lyrics, melody, the use of drums and even the sounds of bombs and airplanes. In many cases, this style has made use of the vocabulary and suffering of everyday life in Iraq.

In Iraqi songs, it is no longer strange to hear a lover flirting by saying, “You are like an air raid,” “Waiting for you is like waiting at a military checkpoint,” “Your eyes look like a cannon shell,” and “I wish I was an explosive device in front of your house.” In an environment surrounded by troops and weapons — where the smell of gunpowder constantly hangs in the air because of the frequency of bombings — the excessive use of these terms is enough to change flirting styles and even public discourse.

Youth music is inspired by this reality. The voices and drums go in line with the sounds of explosions on the battlefield.

A major shift in the style of Iraqi songs was noticeable after 2003. Just like other forms of Middle Eastern music, Iraqi songs had traditionally been based on calm music and rhythms and deep reaching lyrics, at times described as a sort of self-flagellation.

War has not been the only reason for these changes. Chaos has had perhaps the most influential role. The social shake-up that resulted from the occupation of Iraq was enough to harden the tone of lyrics. One no longer hears songs of a lover who remains committed even after a breakup, which had been stereotypical of Iraqi music before. Abandonment is now associated with “revenge.” We even find in songs popular among youth phrases such as “I will exact revenge,” “You will pay the price” and “I will kill you with my own hands.”

Although Iraqi songs have not abandoned their masculine tone, some young female singers are explicitly making use of sexual innuendos — about multiple partners and infidelity — with word choices that have been previously regarded as taboo.

There is a correlation between all of this and the development of ways of living around the world, as well as the various ways of expressing oneself through the various arts, the role of technology and the faster pace of daily life. Yet, songs in Iraq seem more chaotic than any other period of development in their styles of expression. One of Iraq’s greatest songwriters, Mohsen Farhan, confirms this.

Young singers have tried to wash their hands of the Saddam Hussein era, which saw many forced, in various ways, to sing for him and praise his heroism and personal qualities. This sort of coercion was all-pervading. After 2003, singers were committed to perform a tremendous number of patriotic songs that praise the homeland and its history, without mentioning specific individuals.

Yet, even this period of time seemed short-lived, as if it never happened. Sectarian terms have been present in the lyrics of Iraqi songs since early on, along with their distinct melodies, which are locally called “tribal Hausa” (believed to be of African origins). They have become present in an exaggerated way in all songs that are anything but void of violence and revenge.

One song that is supposedly patriotic and popular says that the Iraqis “cut the throats of those who approach them.” This is sung while the singer wears an army uniform and carries weapons to show off.

It seems that this style of song, which became widespread after the 2006-2008 civil war, ended a stage that lasted nearly three years, during which patriotic songs were characterized by yodels, recalling the country’s unity and warning of its division.

In addition to the tribal spirit that has been infused into even the most emotional of songs, some singers include praise for certain figures such as a recent song that aired on television glorifying Iraqi Prime Minister Nouri al-Maliki.

This resurgence harkens back to earlier times, with the use of terms such as “our hero and leader” and “the chief of the era.”

It is impossible to consider the song the only indicator of social variables that resulted from the war. Yet, it is certainly one of the most prominent signs, which range from the way people speak, to lifestyle, clothing and ways of dealing with religion, tribal life, culture, sports and art as well as political choices.

Young Iraqis no longer care much about long romantic ballads that speak of heartache and the burning desire it causes, as was typical of Iraqi songs for decades. War has its laws; chief among them is to be realistic. Iraqi music today is so realistic it has turned this art into a battlefield.