Hamas faces three crises; these are its challenges. 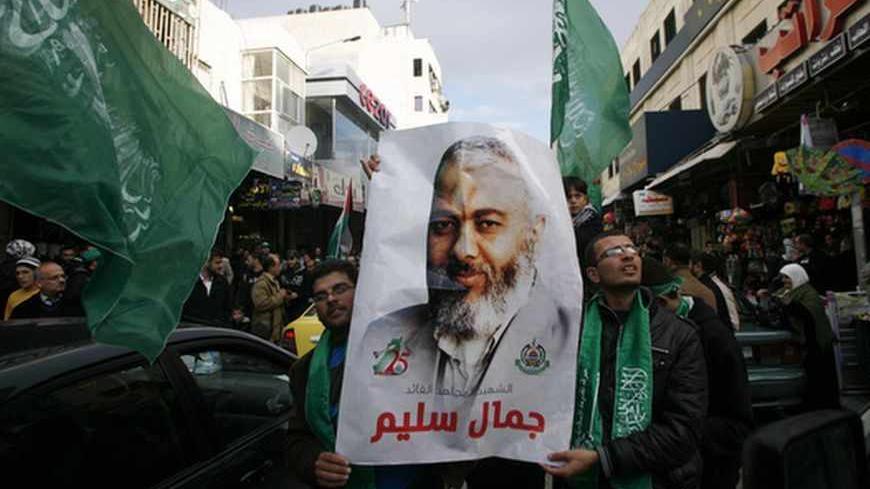 Palestinians hold a placard depicting senior Hamas leader Ismail Haniyeh during a rally in the West Bank city of Nablus, marking the 25th anniversary of the founding of Hamas, Dec. 13, 2012. - REUTERS/Muammar Awad

The call by Ismail Haniyeh, Hamas’ prime minister in Gaza, to different factions and personalities in the territories it controls to join Hamas in sharing the administration and the management of the Gaza Strip came as a great surprise. Hamas, more or less like Fatah, controls the West Bank via the Palestinian National Authority, and holds part of the blame for the lack of any progress toward a Palestinian reconciliation, an issue that has been on the table for years.

Regardless of who is to be blamed, Hamas was reluctant to set a date for legislative elections to form a unity government. It wants the latter but not the former for fear of losing its hold on Gaza. Yet, the sudden call by Haniyeh to share part of the power in Gaza reflects the multifaceted crisis that Hamas is facing.

First, Hamas, as part of the international Muslim Brotherhood movement, has slowly, and after much discussion within its top leadership, shifted to support the Syrian revolution against the regime. Some reports suggest that several Hamas members in Syria or Lebanon are fighting on the side of the opposition. Even if such reports have not been confirmed, the shift in political alliance has been made.

Due to this shift, Hamas has lost key supporters in the military, financial, diplomatic and political domains, namely Iran and Syria, to Hezbollah in Lebanon. Hamas was profiting from the steadfastness of the resistance movement. It was also a major card in the hands of the Syrian-Iranian axis and in the politics of the Palestinian-Israeli conflict. Despite some slow, timid contacts with Iran and Hezbollah, relations are far from being normalized or restored to the status they once had. Normalization, if it advances, has its limits due to ideological and interest-based differences over the Syrian crisis.

Second, the moment when the Islamists, and more precisely the Muslim Brotherhood, came to power in Egypt, was glorious for Hamas. The latter felt that the whole regional equation in terms of redistribution of power, not only in Palestinian-Israeli politics but in the entire Arab world, has changed to favor it. After a relationship of suspicion during the era of deposed Egyptian President Hosni Mubarak, came political and ideological compatibility with the new regime. The place of the latter is of great strategic importance for the Palestinian issue, mainly for Gaza.

With its mentors and comrades in power, Hamas felt reassured that it had a good lawyer and defender on the diplomatic chessboard. It turned, under the advice of the new Egyptian regime, to the strategy of empowerment at home. This strategy came to replace the old policy of resistance to Israel with varied military actions and engagement. Hamas now looked inward to build the Islamist state rather than confronting the Israelis, something that could embarrass or put pressure on the Muslim Brotherhood, which builds its agenda on the struggle against Israel.

Islamization at home, and not the liberation of the occupied territories, became Hamas' focal point. Once the Muslim Brotherhood in Egypt was shut out of power, Hamas lost its most valuable ally. It is even accused, rightly or wrongly, of having played a dirty role on the side of the Muslim Brotherhood in Egypt helping it to grab power and backing it after it was kicked out.

Third, instead of focusing in Gaza on building a minimal socioeconomic safety net for a strip of territories living under siege and plagued by poverty, it focused on destroying social, political and cultural liberties in an already conservative Gaza society. This was done under the name of Islamization, a strict code of conduct labeled by many as the "Talibanization" of Gaza.

This happened while a certain enriched class was emerging in Gaza, closely connected to Hamas and profiting from the very prosperous business of the smuggling operations in the tunnels. This failure to manage the life of people in Gaza has led to the symbolic, yet still weak, emergence of the Tamarod movement. For many, the old Hamas, seen as a revolutionary liberation movement with an Islamist identity, has turned into a religiously based authoritarian regime controlling an impoverished society.

All these factors acted as a wake-up call, pushing Hamas to call for sharing power, but on its own terms. It is not too late for Hamas to reposition itself via changing its policies and priorities as a national liberation movement with an Islamist ideology, but meeting the challenge requires a lot of courage and vision. Hamas' odds for success remain to be seen.