Hamas' Al-Qassam Brigades have held two military parades in recent weeks and intensified its resistance rhetoric as problems with Egypt and Israel escalate. 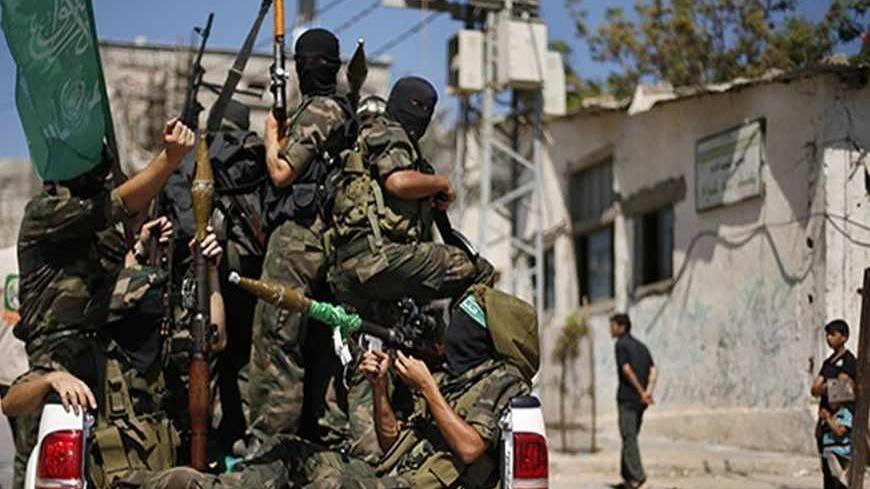 Boys watch as Palestinian militants on a truck protest against peace talks between Israel and the Palestinians, as well as possible US attacks on Syria, in the northern Gaza Strip, Sept. 6, 2013. - REUTERS/Suhaib Salem

GAZA — There is renewed talk in Gaza about returning to resistance operations against Israel. Of particular note, within the span of two weeks, the Izz ad-Din al-Qassam Brigades, Hamas’ military wing, conducted two parades in which other resistance factions participated. In addition, Moussa Abu Marzouk, deputy chairman of the movement’s political bureau, wrote on Sept. 7 on his Facebook page, “Those who claim that Hamas has abandoned the resistance are deluded.”

Abu Marzouk asserted that Hamas has not supplanted the resistance project in favor of a negotiated settlement with Israel and claimed that Hamas’ forces, which numbered in the hundreds in the past, are now in the thousands. According to him, clashing with Israel is the norm for Hamas, truces are the exception, and Hamas has been training, developing and preparing its people for resistance until liberation and the return of the refugees.

In another Facebook posting from the same day, Abu Marzouk said that the cease-fire negotiated with Israel in November 2012, during Egyptian President Mohammed Morsi's tenure, was an agreement to calm things down, not a truce. On Sept. 9, a few days after his statement, the main headline in the Hamas-affiliated Al-Resalah read, “The Resistance Mobilizes and the Siege Tightens.”

The military parades took place on Aug. 22 in Rafah, in southern Gaza, and on Sept. 9, in northern Gaza. They were in response to the decision by Palestinian Authority President Mahmoud Abbas to return to negotiations with Israel. They also apparently had another purpose, as many who participants gave the four-finger salute — the symbol of the Rabia al-Adawiya Square protests during which hundreds of Muslim Brotherhood supporters were killed by Egyptian government forces. As a result of the latter, some factions that had agreed to join the al-Qassam Brigades parade in the north decided to withdraw, because they considered such a gesture interfering in Egyptian affairs.

Commenting on recent developments, Hamas spokesperson Sami Abu Zuhri told Al-Monitor, “Mousa’s comments were natural and made in the context of replying to some of the parties trying to create controversy by saying that Hamas has pulled out from the resistance.” He added that the military parades were to confirm that the resistance is still active and will respond to any aggression in light of recent Israeli threats.

On page 3 of its Sept. 9 issue, Al-Resalah asserted, “The military parade came in response to the plot being hatched, secretly and openly, to harm Gaza and dismantle the resistance infrastructure. We cannot disregard what happened on the border, i.e., the demolition of the tunnels and the establishment of a buffer zone. And we will not stand idly by as the blockade of Gaza is being tightened as part of a conspiracy to overthrow the existing rule in Gaza.” Some wonder, however, whether breaking the truce with Israel would alleviate Hamas’ financial crisis, the siege or the tension along the Egyptian-Palestinian border.

Hamas MP Yahya Moussa told Al-Monitor that he does not believe the blockade can be defeated by resistance, noting, “The resistance does not confront plots with plots. Rather, the [resistance] consists of acts with known consequences and has a high degree of awareness.” He also argued, “This blockade imposed by the Zionist entity is aimed at breaking our morale, and the only way to address it is for the Palestinians to close ranks and work to end it through popular and diplomatic means.”

Moussa further stated, “The truce was caused by factors governing the work of the resistance, and [the truce] will continue until the resistance factions decide it is no longer in the Palestinian people’s interest, and [when that happens] the agreement to maintain calm will be discarded by means of a collective decision.” Moussa believes that any movement supported by the people is not isolated.

The MP stressed that the final decision regarding a return to resistance operations will be made by the government, which is constantly studying the proper tactics. He explained, “If it is decided that [resistance] is the only solution to help the people, then we will go back to [resistance]. There is no veto on the use of resistance.”

Mo’min Bsaisu, a political writer close to Hamas, said that if Hamas changes its approach to the occupation, it can get the movement out of the multiple crises afflicting it after it monopolized power. During an interview in his office with Al-Monitor, Bsaisu asserted, “Hamas’ reconsideration of the resistance project by getting out of the governing impasse in light of the hostile international environment is the safest and most effective choice in this phase, which is witnessing a plan aimed at starving Gaza and toppling the Hamas government.”

Bsaisu asserted that getting out of governing and returning to resistance should be done in an organized manner and that it can only be achieved when there is a deep national vision, adding, “I think that the occupation will not be struck at this stage, and I think that such a move would be ineffective.” He added, “Hamas is not about to cause any friction with the occupation during the next phase, when [it] is focusing on security, military, political and popular plans related to the internal Palestinian situation.”

Abu Marzouk introduced a new resistance theme in response to Egyptian and Palestinian accusations that Hamas is committing terrorism: “The Gaza Strip is not a swamp of terrorism nor a source of extremism, but a base of resistance, a thorn in the face of the occupation, the abode of national pride and a project for liberation and for the refugees’ return.”