Iran is ready to participate in the Geneva II process in Syria, but only if asked, says Iranian Foreign Minister Javad Zarif in an exclusive interview with Al-Monitor. 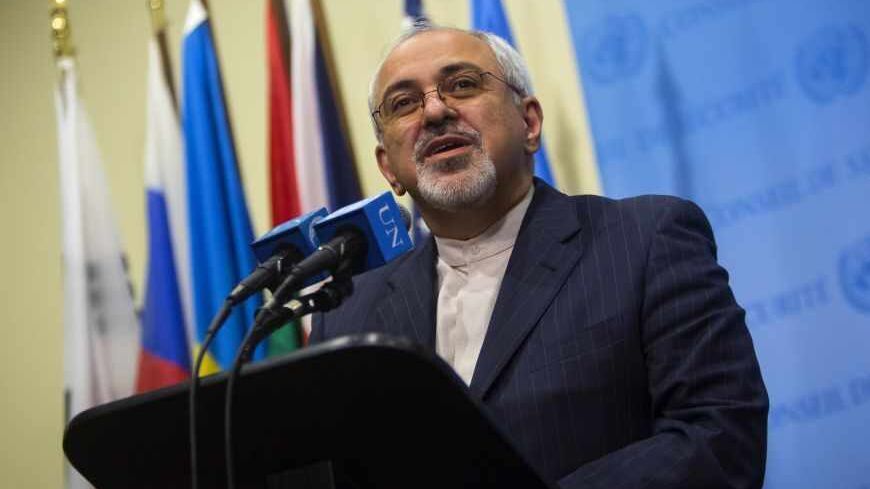 Foreign Minister Mohammad Javad Zarif speaks to the media after meeting with representatives of the five permanent member countries of the United Nations Security Council as well as Germany at UN Headquarters in New York, Sept. 26, 2013. - REUTERS/Eric Thayer

NEW YORK — Iranian Foreign Minister Mohammad Javad Zarif said that Iran should be invited to the Geneva II talks on Syria and is willing to help with implementation of the agreement to rid Syria of chemical weapons.

Zarif, in an exclusive interview with Al-Monitor, said that Iran is prepared to move quickly on the nuclear file.

“I am happy that Secretary [of State John] Kerry said last night on ‘60 Minutes’ that he can resolve this in three to six months,” Zarif said.  “Nobody can be more glad than I would be if I see the political will on the part of the United States and the rest of the E3+3 to resolve it in one month or two months.”

Zarif, who accompanied Iranian President Hassan Rouhani to New York for the UN General Assembly and has stayed on for further meetings, added, “If we resolve the nuclear issue, it would pave the way for the resolution of other issues.”

Zarif explained the importance of relations with Russia and China in Iran’s regional strategy and described a positive atmosphere in Rouhani’s meeting at the Shanghai Cooperation Organization summit in Bishkek in September with Russian President Vladimir Putin and Chinese President Xi Jinping.

Zarif explained how Iran’s relationship with Russia has worked in Syria.

“You have seen some positive outcomes of this regional cooperation in Syria,” Zarif said.  “We have worked closely with Russia and worked with the Syrians in order to ensure that we avert a war, because we knew that war would be a catastrophe.”

“It was averted through a concerted effort on the part of a number of players, including Iran and Russia, and the United States, and a good number of other players, because there were forces that were pushing for war,” he said.

“We certainly wanted the issue of chemical weapons addressed,” he said. “We had a lot of diplomatic contacts. … We were in Moscow when the agreement was reached at the level of deputy foreign minister.”

“To that extent we were a party,” he said, “but obviously this was a Russian-American agreement and we helped along as we could.”

Zarif said that Iran is ready to help with the implementation of the chemical weapons agreement.

“We have to move now to the implementation of the Syrian chemical weapons convention,” he said.  “It’s going to be tough, we will be prepared to help — in order to make sure that is implemented correctly and speedily — in whatever advice that we can provide as a country that has gone through it and destroyed its chemical weapons facilities under the supervision of  the Organization for the Prohibition of Chemical Weapons.”

“We hope that non-state actors will also be disarmed in the context of Syria, because we know that there are chemical weapons in the hands of non-state actors,” he said, adding,

“We want to make sure Syria will not become the next base of extremism.”

Zarif said one of the positive outcomes of the agreement on Syria’s chemical weapons has been a jump-start for a diplomatic process.

“Iran is prepared to participate in Geneva II,” he said, but only if asked.

Zarif said Iran has a history of positive participation in international negotiations such as the International Conference on Afghanistan held in Bonn in 2001.  He said “the image of Bonn without Iran would have been disastrous.”

“They can test it in Geneva to their own detriment,” he added.

Asked if the Iranian government was committed to Syrian President Bashar al-Assad, Zarif said that Iran supports Syria’s sovereignty and the will of the Syrian people, and that elections should determine the future of Syria.

Zarif said that diplomacy in Syria should encourage “intra-Syrian negotiations between groups who are committed to the sovereignty and territorial integrity of Syria and hopefully do not want to have their country bombed out existence before they come to the negotiating people.”

On the nuclear file, Zarif said he is seeking “consensus on the final step” which he had suggested could be done in a year, or maybe less, such as Kerry suggested on “60 Minutes,” if the will is there to do so.

That final step, or endgame, for Iran, would be a civil nuclear program, with an enrichment program, under internationally agreed safeguards and supervision, and the lifting of all sanctions on Iran.

Iran is meeting with P5+1 for the next round of nuclear talks in Geneva in October.

Zarif said there will need to be immediate and interim steps to build confidence in the negotiating process. For example, Iran could be prepared to accept interim limitations and monitoring of Iran’s enrichment program in return for some immediate sanctions relief.

Zarif said Iran today is a self-confident nation, and that sanctions, which have hurt ordinary Iranians, have not affected Iran’s policies.

“We can engage in serious negotiations and not simply statement readings,” he said, “but we will not compromise on our rights.”

“Give and take does not mean concessions, give and take means compromise based upon mutual understanding and mutual interests,” he added.

“It always takes two to tango. I am not going there trying to buy time.”

Andrew Parasiliti is editor and CEO of Al-Monitor. He also serves on the board of directors of the US Friends of the International Institute for Strategic Studies and is a member of the Council on Foreign Relations. He also served as a foreign policy adviser to Chuck Hagel when Hagel, now defense secretary, was a senator.