No Longer David: The State of Israel As Goliath

In a new book, journalist Max Blumenthal leaves the ''comfort zone'' of the Jewish American community, opening the issue of Israel and the conflict with the Palestinians to critical debate. 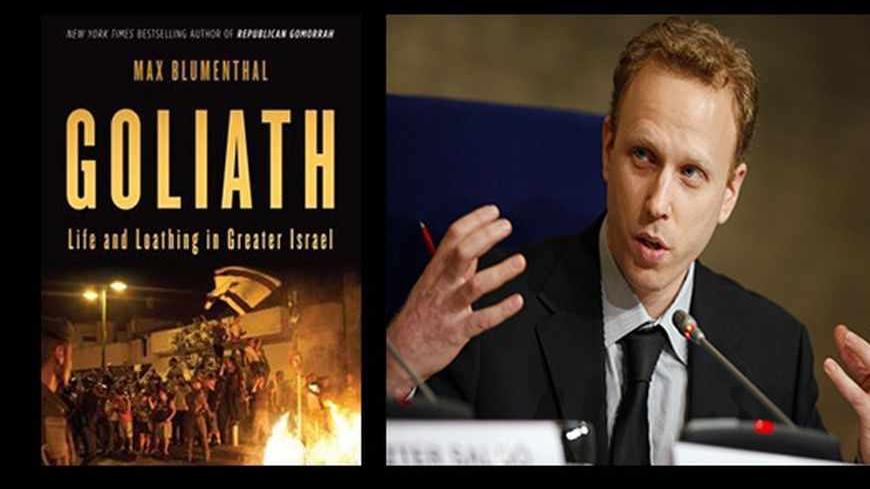 In "Goliath," a new book by the American-Jewish journalist and blogger Max Blumenthal, he chooses to leave his comfort zone and go into disputed territory. - maxblumenthal.com/

Whenever you speak with an American Jew about Israel, you always end up at the same point. The conversation starts with Israel, but rarely ends there. It almost always ends with “them.” So begins “The American Jewish Cocoon,” a lengthy article by Peter Beinart published Sept. 4 in The New York Review of Books.

“Them,” of course, refers to the Palestinians. “They” are that same monolithic entity, faceless and devoid of a clear identity, that provides the wranglers with the ultimate response to any criticism of Israel: “They” teach their children to hate and kill; “they” don’t accept Israel’s right to exist; and why don’t “they” criticize their own society as Israelis criticize their own?

The experienced Beinart has stopped answering claims and questions related to “them.” Instead, he suggests to his interlocutors that they would do well to refer their complaints to the Palestinians themselves. He knows that usually, this will be the end of the conversation. American Jews don’t know any Palestinians and aren’t interested in dialogue with real individuals from among this imaginary mass.

The rules of the Jewish student organization Hillel make it hard to invite Palestinian lecturers to speak on US campuses. The 350,000 youths who have visited the Holy Land on Taglit (Birthright) programs have not toured Palestinian towns in the West Bank. The Jewish media is almost completely off-limits to Palestinian writers. Among the more than 200 speakers who took part in the various panel discussions at the last annual AIPAC conference in the United States, only two were Palestinians.

Last week, on Sept. 18, I mentioned in Al-Monitor that even the liberal Jewish organization J Street is having second thoughts about its 2011 objection to an American veto on a UN Security Council resolution condemning the Israeli settlement enterprise.

Against this backdrop, the new book by the American Jewish journalist and blogger Max Blumenthal is particularly noteworthy. Goliath is being published by Nation Books.* Unlike most Jews — American or Israeli — Blumenthal chose to leave his comfort zone, go into disputed territory and examine the burning questions for himself. In fact, Blumenthal’s greatest strength and interest is in events on the ground and the people who live there, far from the “peace process” and diplomatic salons.

Goliath is a portrait of a modern-day Sodom, a society that years ago stopped being “David of the beautiful eyes” and is determined to sustain an image of being weak and victimized. Blumenthal points to the manipulative use made by Israelis of the memory of the Holocaust in order to shape a collective consciousness, strengthen the society's inner cohesion and shut itself off from a world perceived as threatening and malevolent.

He focuses on a period starting in December 2008, when Israel launched the attack on Gaza code-named Operation Cast Lead. He describes events that took place in Israel and Palestine during the term of the previous Benjamin Netanyahu government [2009–2012]. Blumenthal dives into the depths of Israeli society of recent years, describing the prevailing atmosphere and the individuals who shaped it. He tells of Israeli youths who take part in the demolition of a Bedouin village as part of a “summer camp” rife with nationalism and hatred, of the arrest of anti-war protesters in the name of “preserving the public peace” (Orwell couldn’t have phrased it better) and about permanent, discriminatory ethnic division and separation.

The local media is portrayed as a central collaborator in this construction of a false consciousness by presenting the pronouncements of the army spokesman as irrefutable fact and absolute truth, without demanding proof of the information being provided. Blumenthal also does not spare those who are not part of the ruling right-wing coalition. His accusatory finger points toward the Israeli peace camp, which, in the first days of any military operation, tends to line up behind the government Blumenthal provides the example of Chaim Oron, the previous leader of the left-wing Meretz party, in the initial stages of Operation Cast Lead.

Blumenthal’s depressing if somewhat radicalized narrative does make room for some righteous people of Sodom. They are personified in the young activists on the margins of Israeli society, and even rejected by it, and members of the Palestinian popular councils. Despite the draconian measures used against them, they adhere to nonviolent opposition to the Israeli occupation. The figure of the “prophet,” as professor Yeshayahu Leibowitz is described, hovers above them, and a chapter is devoted to him and to his dark prophecy way back in 1967 regarding the direction being taken by Israeli society, which Blumenthal chronicles.

The book’s stated audience is the American public. In the foreword, Blumenthal writes that he wishes to show them “what they’re paying for, the facts as they are today, in a way that is not dressed up and laundered, devoid of sentimentality or nostalgia.”

For the knowledgeable Israeli reader, the one who knows the facts about which Blumenthal writes and even concedes them, even if he’s not in full agreement with the sharp framing or with some of his conclusions, a significant part of the book’s strength lies in the effect that is naturally created when a foreign correspondent describes the reality of your life and surroundings. Thus, as if from a bas relief, details are raised to which the local eye has become so accustomed that it no longer notices their existence.

The final scene in the book takes place in a New York apartment, in the presence of young Israelis who have gone into voluntary exile after despairing of the struggle for social change in the society in which they grew up. These are young people hungry for life and justice, who sense that they have lost the battle and have therefore chosen to leave the field. This final chord amplifies, perhaps, the warning bells being rung by Blumenthal. It’s more tempting, however, to see in the author himself a representative of a new American Jewish generation — a generation that feels a kinship to Israelis and Israel without being blind to its faults. After all, staring reality in the eye and recognizing it for what it is, without the frills, could be very helpful for us.

* Disclosure: Nation Books published the English version of Lords of the Land, a book I co-authored with Idith Zertal. I wrote a few words for Blumenthal’s book jacket at Nations Books' request.