The Ergenekon trial has made it clear to the decision-makers in Jerusalem that the Turkish army will no longer be able to serve as a bridge between the two countries. 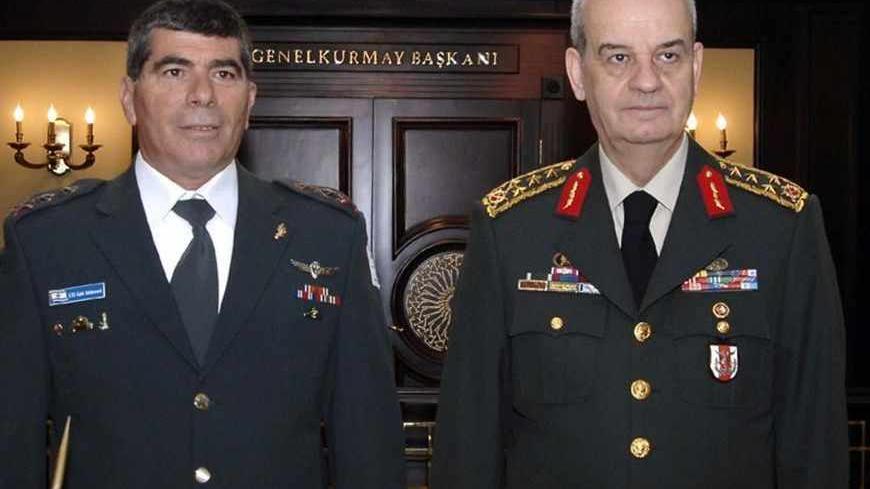 Israel's then-armed forces chief Lt.-Gen. Gabi Ashkenazi (L) and Turkey's then-chief of general staff, Gen. Ilker Basbug pose prior to a meeting in Ankara, March 15, 2010. Ashkenazi was in Turkey to attend the Global Terrorism and International Cooperation Symposium. Ilker has been sentenced to life in prison. - REUTERS/Turkish Army Press Office

The punishments handed down by the special Turkish tribunal for many of the 275 defendants in the Ergenekon case — the coup plot to overthrow the elected government — have sparked worldwide interest. The trial is seen as a significant and, at the same time, controversial milestone in Turkish history. Columnists and commentators in the Turkish media have analyzed the sentences and their implications from a variety of angles.

It seems that there is little dispute over the necessity of the trial, which was an integral part of the process of democratization and separation between the military establishment and the political system — a process that Turkey had desperately needed and hoped for. The European Union has even set such a process of change as one of the preconditions for the acceptance of Turkey into the Union. However, as the spectrum of defendants and range of charges was expanding, and above all, when the court passed the draconian sentences — several cumulative life sentences and dozens of years of imprisonment — the trial has become another symptom of the malady [besetting Turkey] rather than serving as the sought-after therapy.

Al-Monitor contributor Semih Idiz described how the Ergenekon trial, which had been primarily meant as yet another measure on Turkey’s right path away from its past, eventually turned into a stumbling block on that same path.

The Ergenekon affair is considered by many to be a warning sign on the path Turkey has been following toward becoming a state run in keeping with European standards. The general feeling is that, notwithstanding the reshuffle of its leadership, Turkey has not really set out on a new way. The situation is aptly summed up in the title given to Nuray Mert’s opinion column [Aug. 12] in the Turkish daily Hurriyet: “The ‘deep state’ is dead! Long live the new deep state!”

The term ‘deep state’ denotes an underlying elitist system that churns beneath the surface in Turkey, and which runs state affairs according to its own needs rather than in compliance with the needs of the public at large. In the past, it consisted of army officers, journalists and secular nationalist politicians, who used the state institutions to enforce their worldview on the nation. This deep state no longer exists. According to Hurriyet, it has been replaced by another inner-circle elitist system, which is currently running Turkey as it deems fit, using the state institutions to impose its worldview. This time around it is the Islamist ideology.

Of the harsh sentences passed by the court in the Ergenekon trial on the guilty parts, the life sentence the court handed down for former chief of general staff of the Turkish army, Gen. Ilker Basbug, is especially striking. Basbug, who had been appointed to office during Recep Tayyip Erdogan’s tenure as premier and who was seen and photographed at his side, along with President Abdullah Gul, in a variety of national events, as evidenced by archive footage, has now been convicted of leading the conspiracy. Some see in this sentence proof that the new civil-Islamist system has gone a step too far and become, in effect, the “new deep state.”

These warning signs concerning the direction in which Turkey is heading are seen in Israel, as well. The Israeli media in large part encountered some difficulties in dealing with the subtle distinctions of the affair, taking the opportunity to present Erdogan as a ruthless tyrant avenging his opponents. The Israeli daily Yisrael HaYom, which is considered politically leaning toward Prime Minister Benjamin Netanyahu, declared in a banner headline [Aug. 6]: “The Erdogan revolution has been completed.” And it was not a democratic revolution that the paper was referring to.

It seems that only now Jerusalem is becoming aware of the irreversible process Turkey has gone through, and that it is just now coming to grips with the fact that the Turkish army has lost its historic role as “the guardian of the secular-Kemalist constitution.” Many Israelis, particularly in the security and diplomatic establishment, believed up to now that the Turkish army would eventually resume its position as a bridge between the two governments and the two countries. They thought that military cooperation was still possible.

However, it emerges from talks with sources close to the inner circle of decision-makers in Israel that, now that the senior officers of the Turkish army have been sent to prison for the rest of their lives, it has finally dawned on Jerusalem that the golden era of security relations between the two countries is over. This may explain why, regardless of his apology to Erdogan over the [2010] Marmara affair, Netanyahu is not making any real effort to bridge the deep gap between the two sides concerning the compensation clause, and why he is not devoting more time and energy to reviving the stalled normalization process.

All through the trial, there were elements in Turkey who sought to hurt Gen. Basbug by highlighting his friendly relations with Israel. Islamist media channels published photos of Basbug, clad in civilian attire, on a visit to the Western Wall in Jerusalem, alongside a  bearded ultra-Orthodox Jew, wearing long sidelocks and a kippah [religious skullcap]. Other photos of Basbug, with former Israeli Chief of Staff Gabi Ashkenazi, with whom he had been holding close ties, were also pulled from the archive.

Charges have also been filed in Istanbul against Lt. Gen. [ret.] Ashkenazi himself for his part in the takeover of the Mavi Marmara by Israel Defense Forces soldiers. Three other senior IDF officers are currently standing trial along with Ashkenazi, and the prosecutor in the case has asked the court to sentence them to a total of 18,032 years in prison.

Given the precedent of Basbug and the others convicted in the Ergenekon trial, and considering the deadlock in the Israeli-Turkish reconciliation process, the request may yet be granted by the Turkish court.

Arad Nir Is the head of the foreign news desk and international commentator for Channel 2 News, the largest news provider in Israel. Arad has covered international politics and diplomacy, ethnic conflicts around the world and interviewed various world leaders, decision makers and opinion leaders. He teaches TV journalism at the IDC Herzliya and Netanya Academic College.