Turkish Prime Minister Recep Tayyip Erdogan accused Israel of being behind the Egyptian military coup only to be met with strong criticism from Egypt, Israel and the United States. 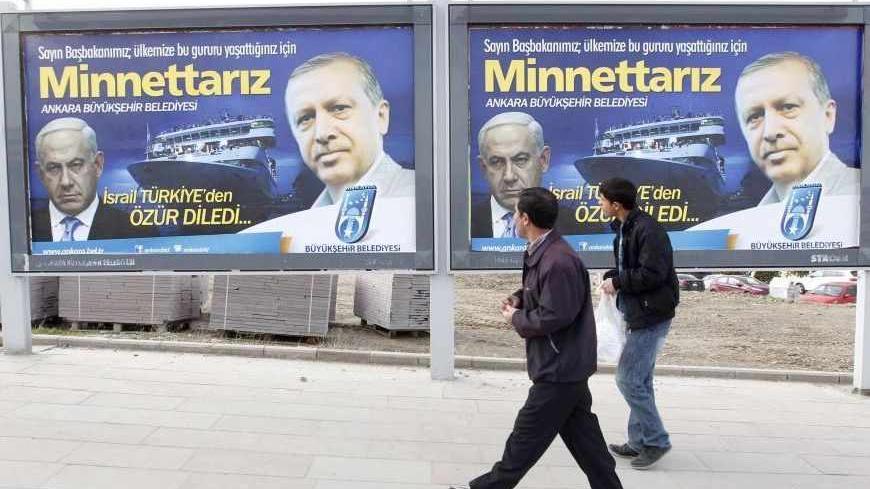 What would happen if everything got taken seriously? It sure wouldn’t be a healthy way to live.

That may be one reason why Israeli Prime Minister Benjamin Netanyahu’s office decided to play down Turkish Prime Minister Recep Tayyip Erdogan’s accusation that Erdogan has “evidence” that “Israel is behind the Egyptian military coup.” Sadly, though, the more Erdogan continues his frenzy of blaming Israel for any and all troubles in the world, the less and less meaning his words impart.

Addressing a meeting of his party’s provincial leaders on Aug. 20, Erdogan claimed he has “the related documents to prove” that Israel put into place the master plan that brought down elected Egyptian President Mohammed Morsi; Erdogan linked it all to the West’s hypocritical approach in defining and implementing the principles of democracy.

“We say that the path to democracy goes through ballot box, which shows the will of the people. That’s what was implemented in Egypt. What they’re [now] saying in Egypt is that ‘democracy is no ballot box.’ Who is behind this? Israel is. We have the evidence in our hands,” said Erdogan.

The so-called evidence that Erdogan was referring to was a public conversation in 2011 between Israeli politician Tzipi Livni [currently justice minister] and French philosopher and author Bernard-Henri Levy; the whole session can be viewed on YouTube.

No one has come up with any other potential evidence that could prove Israel’s direct involvement in the Egyptian military coup, and the Egyptian government has indicated that its patience is running out with Erdogan’s attempt to divide the Egyptian people. In a written statement, the Egyptian cabinet said that it found Erdogan’s remarks “very bewildering” and that his statements “are baseless and cannot be accepted by any logic or rationale.” It went on to say, “These statements aim at dividing the Egyptian people and undermining their national institutions.”

This is, however, not the first time that Erdogan has gotten carried away and pretended to be more Arab than an actual Arab. Whatever worked in the past to rally the Arab people by slamming Israel at any opportunity is no longer working. After all, what Erdogan is doing is accusing Egyptian Gen. Abdel Fattah al-Sisi of being an Israeli agent, something that is really difficult to comprehend.

Erdogan believed that Israel or the Jewish lobby was also behind the Gezi Park protests in Turkey, as he considers the Jewish state as hostile to his success and achievements in the past decade. This is really becoming a challenge to understand — how is Israel able to control and coordinate all these events? Israelis may well decide to boast of their influence and impact on world affairs. But not all of them have the same temperament as Netanyahu in preferring not to get into a verbal fight with Erdogan. The Israeli prime minister’s office called Erdogan’s remarks “nonsense,” and chose not to elaborate further.

Former Israeli Foreign Minister Avigdor Liberman, however, more or less shares the same kind of temperament as Erdogan. “Everyone who heard Erdogan’s words full of hate and incitement understand without a doubt that we are talking about the successor to Goebbels,” Liberman said. Joseph Goebbels was Hitler’s minister of propaganda, a notorious anti-Semite who skillfully portrayed Jews as the enemy of the German people and played a critical role in the mass genocide of the Jews during the Second World War.

Liberman may have gone too far in comparing Erdogan to Goebbels, just as Erdogan has gone too far with his remarks. The fact of the matter is, however, that Erdogan’s obsession with Israel and his mindset that portrays the Jewish nation as the ultimate enemy of the Muslim and the Arab world really disturbs many. Otherwise, the White House and the State Department would not have openly stated that they “strongly condemn” Erdogan’s remarks. “Suggesting that Israel is somehow responsible for recent events in Egypt is offensive, unsubstantiated and wrong,” White House spokesman Josh Earnest said Aug. 20.

The White House’s reaction might be a reflection that President Barack Obama is also having difficulty in finding better ways to close the rift between once-close allies Turkey and Israel. During his first presidential visit to Israel in March, Obama declared that a solid accomplishment of his travel to the Middle East was persuading Netanyahu to apologize to Erdogan concerning the deadly May 2010 Mavi Marmara flotilla incident where nine Turks were killed.

Since then, however, Turkish and Israeli negotiating teams have not been able to reach a compromise on the meaning and amount of the compensation money to be paid to the loved ones of those killed on the flotilla. While Erdogan pretended at first that he accepted the apology, it became clear after a while that the details of this apology were not well-orchestrated in advance and conflict arose over the substance of that Israeli compromise.

While there was all the hope in the Turkish diplomatic chorus that it would be an easy deal to finalize, the Erdogan government pushed the talks up the hill by demanding an astronomical amount of money — $58 million — for the deaths. Israelis proposed paying only $5 million. Then the Turkish side brought it down to $24 million, and the Israeli side offered half of that in return. Now the talks are stalled. And there is hardly any hope in this climate that these countries will be able to put the Mavi Marmara incident behind them anytime soon. That must be a direct blow to what Obama called a success story of his Israeli trip.

While Erdogan’s dislike of the Jewish state continues at full speed, there is no concrete plan that the Ankara government has put forward to help put out the fire in the region except to accuse Gen. Sisi of being Israel’s man in Egypt. For anything this bizarre-sounding, it is best to move on — but also to conclude that in this political climate, Israel won’t be making Turkey its gateway for exporting its newly found hydrocarbon reserves to international markets. That may deliver a direct blow to Ankara’s hopes of being the natural hub of energy in the region. But that is another story to be explored in a future article.