Turkey's Prime Minister Recep Tayyip Erdogan accuses Israel of being behind the coup in Egypt, thus exposing himself again to criticism and ridicule. 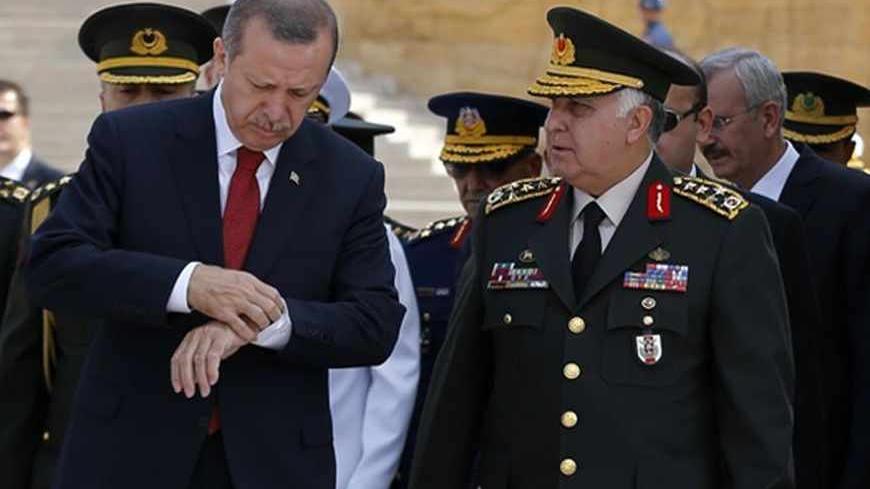 Using logic that has left most Western and some Arab diplomats in Ankara with mouths agape, Prime Minister Recep Tayyip Erdogan has accused Israel of being behind the coup in Egypt, earning himself flack from Washington and more ridicule from the international media. Erdogan’s outburst is also being taken as a further sign that he is not interested in normalizing ties with the Jewish state, despite the apology from Israeli Prime Minister Benjamin Netanyahu for the Mavi Marmara raid on May 31, 2010.

Israeli commandoes killed nine pro-Palestinian activists after boarding the aid ship Mavi Marmara in international waters, as it was heading for Gaza in an attempt to break the Israeli blockade. The incident ensured Turkish-Israeli ties, already strained after Israel’s Operation Cast Lead against Gaza in 2008 that left scores dead, hit rock-bottom after this incident.

Netanyahu, under pressure from Washington, apologized to Turkey in March this year and agreed to pay compensation for the victims. The development was a great surprise to the Erdogan government which did not expect this apology. US efforts have so far come to nothing, reportedly due to wrangling over the compensation to be paid to the families of the Turks killed.

Most Western diplomats are convinced at this stage that Netanyahu’s apology was an inconvenience for Erdogan, since normalizing ties with Israel would represent a political liability for him and his party given the virulently anti-Israeli sentiments among his grassroots supporters.

Meanwhile, ranking Turkish Foreign Ministry officials sounded out by Al-Monitor about Erdogan’s remark restricted their replies to throwing their eyes skyward and preferring not to comment, a demeanor which nevertheless revealed much. It is clear that Turkish diplomats — who believe in the practical value of normalized ties with Israel — are following Ankara’s rapidly declining influence in the Middle East and increasingly tarnished reputation in the West with concern.

Addressing regional representative of his Justice and Development Party (AKP) on Aug. 21, Erdogan referred to an open panel discussion in 2011, just before the elections in Egypt, between Israeli Justice Minister Tzipi Livni — who was the leader of the opposition at that time — and the French Jewish intellectual Bernard-Henri Levy. He claimed this was documented proof that Israel is behind the coup in Egypt.

“We have the document. During a panel discussion in France prior to the 2011 elections, the justice minister and an intellectual are speaking. He, too, is Jewish. He says, 'Even if the Muslim Brotherhood wins the elections, they will not win because democracy is not the ballot box.'”

In the recording of the discussion at Tel Aviv University in June 2011, Levy is asked to comment on the possibility that the Muslim Brotherhood may win the Egyptian elections and whether the military should intervene in that case.

“If the Muslim Brotherhood arrives in Egypt, I will not say democracy wants it, so let democracy progress. Of course not. Democracy, again, is not only elections, it is also values,” Levy is heard saying. He admitted that he opposed the 1992 electoral victory by Islamists in Algeria and viewed the 2006 electoral victory by Hamas as a “putsch.” Livni is seen nodding in approval.

When asked to comment on Erdogan’s remarks based on Levy's words, a senior Western diplomat in Ankara, who asked not to be named due to the nature of his job, said the same logic could be used in other ways.

“One could also argue, and perhaps more convincingly, that there is strong evidence to indicate that Arab powers are behind the coup,” he said, pointing to the way Gulf states immediately came in with political and economic support for the Egyptian military. The diplomat added, “He is aware that hitting at Saudi Arabia and its Arab allies does not resonate among Erdogan’s Islamist supporters the way beating at Israel does.”

In light of these remarks, it was telling that Foreign Minister Ahmet Davutoglu should have treated a question on Saudi support for the Egyptian coup with kid gloves during an interview with the pro-government news channel 24-Haber. “Saudi Arabia is a country we lay great importance on. It has different priorities,” Davutoglu remarked.

It was noticeable that he should refrain from criticizing Saudi Arabia at a time when virulent criticism is emanating from Turkey against the West on Egypt. Davutoglu himself said during his T-24 interview that they were watching the European position on Egypt with “amazement and disappointment.”

“If there is a response to be given, let Israel do it. We can not accept that the United States condemns us over a text in which the United States is not mentioned once,” he said. He did not fail to take a swing at Washington by also questioning the alleged US indifference toward the massacre in Egypt.

Questioned about Erdogan’s remark during her daily press briefing on Aug. 20 in Washington, State Department spokeswoman Marie Harf said, “We strongly condemn these statements. Suggesting that Israel is responsible for recent events in Egypt is offensive, unsubstantiated and wrong. These statements distract from the urgent need of all regional countries to work together through constructive dialogue to address the fluid and dangerous situation in Egypt.”

These were the harshest words against Turkey from the United States in recent times. In contrast to the US statement, Israel was dismissive about Erdogan’s words. “This is a statement well-worth not commenting on,” Foreign Ministry spokesman Yigal Palmor was extensively quoted saying on Aug. 20 by the Israeli media.

Not surprisingly, the Egyptian response was much harsher than the Israeli response. Presidential spokesman Ahmed al-Muslimany denounced Erdogan by declaring, “Agents of the West should not give lessons in patriotism.” He added, “They will not break Egypt.”

Davutoglu also declared during his 24-Haber interview that Ankara is currently engaged in secret diplomacy to resolve the Egyptian crisis. But given Muslimany’s remark and the cold winds presently blowing between Ankara and Cairo, it is difficult to see what role Turkey can play in this regard.

Meanwhile, Erdogan — for whom the Western media has climbed high on his list of enemies since the  Gezi Park demonstrations in Turkey — has also become the butt of insulting remarks from leading Western journalists.

Not surprisingly, Rachman automatically became an object of hate for AKP officials and supporters who have alleged all along that there is a conspiracy against Turkey by the international media, which is allegedly controlled by Jews.

Whatever political points Erdogan may be gaining from his constituency at home and Islamist admirers in the Middle East, it is clear that his credibility in important capitals — stretching from Washington to Riyadh — is rapidly being eroded with remarks such as the one about Israel. If we are to go by what diplomats in Ankara are saying, he has only himself to blame.