While the Jewish community in Turkey — now reportedly under surveillance by Turkish intelligence services — wants to help the Erdogan government heal its rift with Israel, it’s unclear as to what they can do, writes Tulin Daloglu. 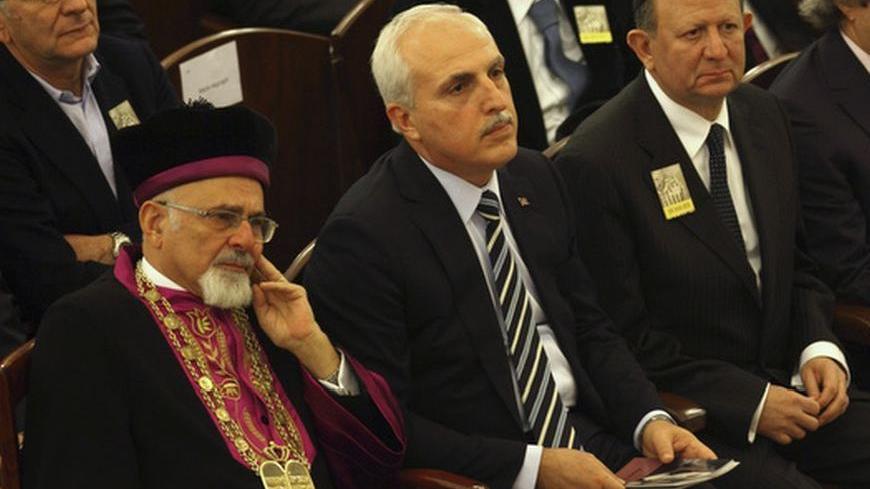 The deteriorating relationship between Turkey and Israel has generated unprecedented and disquieting accusations against Turkey’s Jews. There is a growing tendency in this country — encouraged by the ruling Islamist government — that demonizes Jews and triggers anti-Semitism, consciously or not.

For example, Turkish Prime Minister Recep Tayyip Erdogan surprisingly raised for the first time — just hours before the cease-fire between Israel and Hamas was announced on Nov. 21 — the question of the "dual loyalty" of Turkish Jews. Then, daily Yeni Safak, a supporter of Erdogan’s government, claimed in a front-page story on Dec.13 under the headline “Murderers amongst us” that there were Turkish-speaking Israeli soldiers who boarded the Mavi Marmara flotilla on May 30, 2010 and killed nine Turks.

When the readers’ comments on the article warned of physical threats to Jewish citizens, Rafael Sadi, the spokesman of the Association of Turkish Jews in Israel, condemned the news report.

“Yeni Safak and other extremist newspapers are eager to twist the truth and paint a picture as if having a dual citizenship as a Turk and an Israeli equals treason in Turkey,” he told Al-Monitor. Sadi said that at the request of the Israeli Interior Ministry on the night of the raid, they sent eight volunteers to Ashdod Port as those detained were going through passport control.

“While we do our best to help both sides to correctly understand each other and facilitate their communication, how could this be labeled as an act of treason?” Sadi also mentioned that Avital Leibovich, the spokeswoman of the Israeli army, told him that “no Israeli soldier of Turkish ethnicity took part in the [Mavi Marmara] operation.”

Turkish papers reported that the prosecutor’s office in Istanbul that tried the Israeli soldiers involved in the Mavi Marmara incident asked the Turkish National Intelligence Service (MIT) for a listing of Turkish Jews who traveled to Israel two weeks before and after the Mavi Marmara incident. These were put under surveillance. There are allegations that the MIT identified five Jews in Turkey as suspicious, and that they expanded surveillance in Istanbul and Izmir — where the majority of the country’s Jewish population lives.

This new atmosphere of enmity between Turkey and Israel puts heavy pressure on a small community of fewer than 30,000 Jews in Turkey, and makes some worry whether their lives could be in danger.

“As a Jew, I can attest to you there is a difference between being a Turk and an Israeli,” Ediz, a Turkish Jew, told Al-Monitor. “But whenever there is fighting between Israel and the Palestinians, the atmosphere in Turkey turns against us, and people start acting as if we committed a crime.” Leri, another Turkish Jew, sounds the same alarm bell. “The media is painting such an image that many won’t even consider us human.”

While the Jewish community in Turkey made it known that they will do all they can to help the Erdogan government heal the wounds with Israel, it’s unclear as to what they can do. When Erdogan appealed for their help in making Israel concede to Turkish demands for the cease-fire between Israel and Hamas in the latest Gaza crisis, he said, “[Turkey’s Jews] have connections there, and they should make use of these connections, because they know very well about the position we are in right now.”

Rafael Sadi told Al-Monitor that this was a puzzling statement, asking, “Is he implying that if we cannot help to reach a cease-fire that we should carry the burden of the ongoing fighting?”

“If he really believes that Turkey’s Jews had so much influence [over politicians], why didn’t he listen to our warnings before the Mavi Marmara set sail toward Gaza?” asked Sadi. “Why did he make such a special effort to sever the ties between Israel and Turkey? The Turkish Red Crescent was then delivering the humanitarian aid to Gaza and it still does. If the issue is the lifting of the Gaza blockade, then he should have found a way to control and prevent the free flow of arms into Gaza.”

Zali De Toledo, chairman of the Association of Turkish Jews in Israel, strongly agrees, and argues that the Erdogan government intentionally took steps to harm the relationship with Israel. “It’s Erdogan who really needs to apologize to us for breaking the long-lasting friendship between our two countries,” she told Al-Monitor.

Yet Erdogan’s call to Turkey’s Jews also showed the limits of his diplomacy because he no longer has state-to-state leverage. He is therefore attempting to use the Jewish community in Turkey as an instrument, and that puts the Turkish Jewish community under a difficult spotlight.

Tulin Daloglu is a columnist for Al-Monitor's Turkey Pulse. She has written extensively for various Turkish and American publications, including The New York Times, International Herald Tribune, The Middle East Times, Foreign Policy, The Daily Star (Lebanon) and the SAIS Turkey Analyst Report.She also had a regular column at The Washington Times for almost four years.