Hassan Rouhani's justice minister played a controversial role in executions during the 1980s, according to human rights organizations. 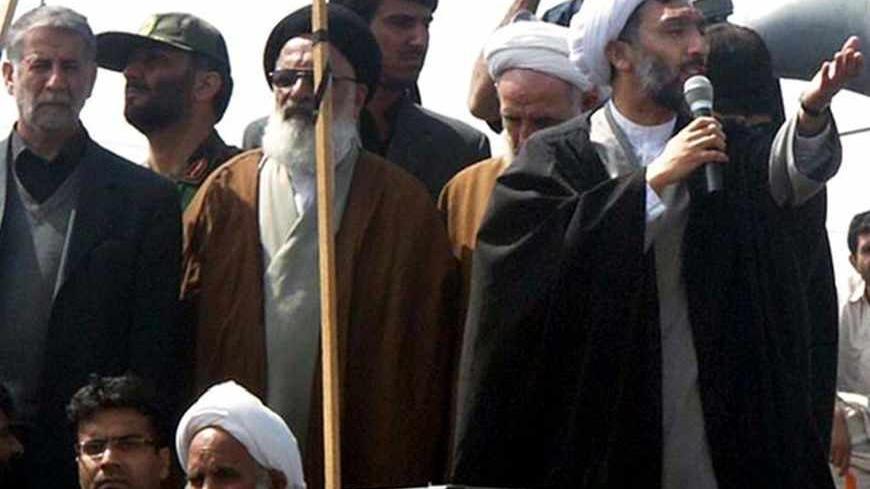 Iran's former Interior Minister Moustafa Pour-Mohammadi (R) speaks during a funeral ceremony for victims who were killed in an attack by bandits in Zabol, 1,605 kilometers (997 miles) south of Tehran, March 18, 2006. - REUTERS/IRNA

In early August 1988, Amir Atiabi, a 31-year-old leftist dissident, heard strange thumping sounds at night from his prison cell on the outskirts of Tehran. One night, Atiabi and another inmate decided to find out the source of the noise, and went to the shower room at the end of a corridor to see what was happening. Peeking through a window, they realized each thud was the sound of a dead body being thrown onto the back of a truck by the prison guards.

"After a while, the noises would stop because when you put bodies on top of other bodies you won't hear the noise anymore," Atiabi told the Iran Human Rights Documentation Centre in 2009. What Atiabi saw that night was a glimpse into a systematic and widespread campaign by the state to rid the country of various political leanings. By the end of the summer, according to Ayatollah Hossein Ali Montazeri, a close confidant of Ayatollah Khomeini and his picked successor from 1985 to 1989, somewhere around 4,200 political prisoners were summarily and extrajudicially executed by the death committees across the country. Khomeini dismissed Montazeri in March 1989, partly for his criticism of the prison massacre of 1988.

Iran's President Hassan Rouhani, feted by the West as a moderate with a conciliatory stance, proposed Moustafa Pour-Mohammadi, a key pillar of that campaign to head the Justice Ministry. Pour-Mohammadi took to the parliament floor and spoke about the importance of justice: "If I am chosen as justice minister ... I have a broader mission and that is to be a minister of justice, a servant of justice and a promoter of justice ..."

The parliament confirmed on Aug. 15 Pour-Mohammadi's appointment, who was dubbed a "minister of murder" by Human Rights Watch in 2005.

"The highest numbers of executions were in two prisons in Tehran and Karaj — Evin and Gohardasht — where Pour-Mohammadi was a decision-maker," says Roya Boroumand, the director of the Boroumand Foundation, an independent Iranian human rights organization in the United States.

"Transparency is the key to open the door of trust ... ," said Rouhani to the West in his first speech, despite the fact that he has stayed silent on the role his new justice minister played in the 1988 massacre.

Many inside and outside Iran hope Rouhani's leadership could break the impasse between the West and Tehran, and ease the suffering of Iranian people under crippling international sanctions imposed during Ahmadinejad's eight-year term. But Rouhani's choice of justice minister raises serious questions about his commitment to accountability and respect for human rights.

Those with extensive knowledge of the widespread state crimes that occurred in the 1980s were shocked to learn that Rouhani, who as a high-ranking official at the Ministry of Defense was himself an inseparable part of the establishment at the time, had appointed a man associated with that dark chapter.

"The deliberate and systematic manner in which these extrajudicial executions took place constitutes a crime against humanity under international law," said Human Rights Watch, when Ahmadinejad appointed Pour-Mohammadi as his interior minister in 2005.

Last year, the families and survivors of the 1988 massacre launched a "truth commission" in London, in which a group of 85 Iranians recounted their terrifying experience of witnessing these executions throughout the 1980s and in particular in the summer of 1988. The campaign was called the Iran Tribunal and drew inspiration from the Russell Tribunal and South Africa's Truth Commission.

While growing up as a child in western Iran, I was exposed to gruesome scenes, but I still attended the tribunal to try to understand the terror and pain that was inflicted on these families throughout the 1980s.  One of the most tragic stories recounted at the tribunal was that of Sahar Mohammadi, a 33-year-old woman whose entire immediate family was executed. As she recounted her story, the audience sobbed. Before her mother was put to the firing squad in 1986 for her leftist beliefs, she wrote in a letter that she had hoped to see her daughter's first day at primary school. "I was one week into my school when I received the news of my mother's execution," Sahar told the judges, one of whom sat on South Africa's Truth and Reconciliation Commission.

While survivors like Sahar and Atiabi, who was finally released in February 1989 after five years in captivity, might have hoped that human rights violators like Pour-Mohammadi would one day be brought to justice, the Scotland-educated Rouhani has pledged to defend Pour-Mohammadi's "successful" record wherever he has served in the Islamic establishment.

Rouhani is justified in his criticism of the unjust international sanctions of the West, and in particular of the United States, that have hurt the Iranian people. But if Rouhani's government truly derives its "legitimacy from its people," as he claims, he must do justice to that legitimacy and practice at home what he preaches to the international community.

"I have nothing to say to Hassan Rouhani  ... I am not surprised that Rouhani has appointed one of the members of the 1988 Death Committee to the Justice Ministry. Pour-Mohammadi has proved that he is the most 'capable' and 'suitable' executioner of the 'Islamic justice,'" Sahar told Al-Monitor in an email, a few hours after the Iranian Majles gave their vote of confidence to Pour-Mohammadi as the justice minister.