Israeli Knesset member Tzachi Hanegbi claims that Israel is ready for concessions with the Palestinians, enabling the government to deal with its real threat, Iran. 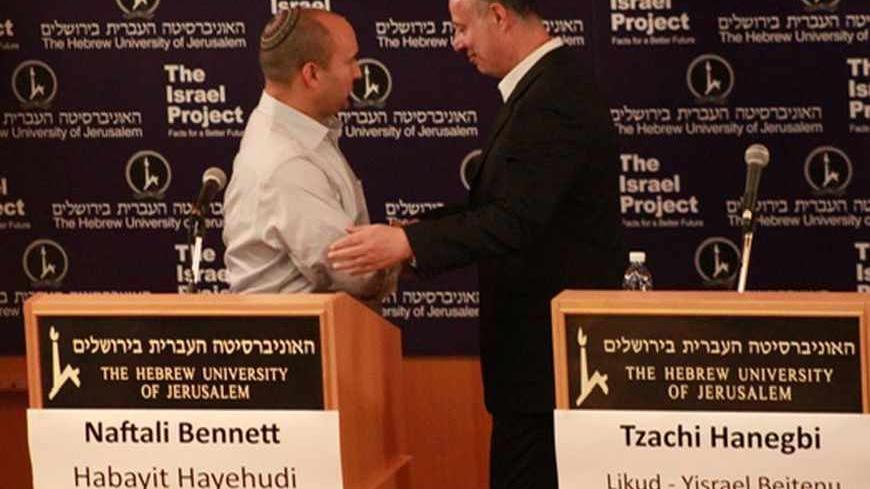 ''Do you think that Prime Minister Benjamin Netanyahu crossed the Rubicon?” That was the question I asked Knesset member [and former Minister of Justice, Minister of Internal Security and Minister of Intelligence and Nuclear Affairs] Tzachi Hanegbi. It is a question that political and diplomatic commentators alike have been trying to crack ever since the renewal of negotiations with the Palestinians was announced. “If he believes that the Palestinians have gone the necessary distance on such issues as security, Jerusalem, the settlement blocs and refugees and have reached their own red lines, Netanyahu will be prepared to take huge steps in their direction,” Hanegbi responded.

While he offered no solution to the original conundrum, he did provide an original distinction instead of the conventional wisdom within the political system, and particularly on the right, which contends that Netanyahu is not interested in reaching an agreement and simply wants to win himself some more time when dealing with the Americans. In contrast, Hanegbi thinks that the prime minister is ready to make concessions that will lead to an agreement ending the conflict. He also believes that if Netanyahu is persistent, the extremists in the Likud Party will not be able to undermine that agreement.

Hanegbi is one of the political figures closest to Netanyahu. He was a minister in his first government, and even after he left the Likud for the Kadima Party, Hanegbi paid frequent visits to Netanyahu’s office. As for Netanyahu, he constantly pleaded with Hanegbi to return to the Likud, and made sure that he would serve as chairman of the Foreign Affairs and Defense Committee, a position he held for five years. Some claim that the reason the two men are so close is that they see eye to eye on the Iranian issue — Hanegbi has expressed support for unilateral action by Israel in the event that the Americans fail to act.

Hanegbi returned to the Likud just before the last elections. Netanyahu wanted to appoint him as a minister, but the Likud failed to receive the number of votes it anticipated, and Hanegbi was forced to make do with the position of chairman of the Knesset Committee. He is slated to change positions with Deputy Minister Ofir Akunis in two years, but as someone who served as a minister in governments headed by Netanyahu, former Prime Minister Ariel Sharon and former Prime Minister Ehud Olmert — and is considered to be an expert on both security and political issues — that is considered to be a minor post for him.

Al-Monitor: Do you believe there is a chance that the negotiations will lead to a breakthrough?

Hanegbi: “There’s a popular joke in the Middle East: ‘What is a pessimist? An optimist with experience.’ On the other hand, when it comes to the diplomatic process, experience has taught me that it is necessary to neutralize emotions and to have an open-minded disposition, with the goal of trying to make progress. I believe that this is the approach taken by Benjamin Netanyahu and by US Secretary of State John Kerry, too. While I can’t say if this is the approach taken by the Palestinians, I do hope that they plan to turn over every stone in these negotiations.

Al-Monitor: Is Netanyahu’s goal to reach a permanent agreement?

Hanegbi: “That must be the goal. The issues may be complicated, but the common interests haven’t changed. It is in the interest of nations to live in a state of peace, rather than in a state of conflict, and I believe that the time is ripe now for the leaders. Palestinian Chairman Abu Mazen [Mahmoud Abbas] realizes that this is his last chance as a Palestinian leader to fulfill the goal of winning his people their independence. He has long since realized that violence will not succeed in achieving that goal. He tried to act unilaterally in the United Nations, but this did not lead to any progress. It could well be that he needed to do that for him to finally do what was obviously right from the beginning, and that no other option exists — to start direct negotiations.

“I suppose that Abu Mazen realizes that if he fails, it means that the PLO is unnecessary and the diplomatic process is irrelevant. In that case, terrorism will once again become the way to advance the Palestinians’ national aspirations. Netanyahu also realizes that the alternative to negotiations is either a continuation of the violence or movement toward what is called a binational state. Neither of these alternatives is very positive, which is why, in my opinion, he is also ready to advance as far as he can.”

Al-Monitor: But Netanyahu wouldn’t have entered the negotiations were it not for US pressure.

Hanegbi: “There is no US pressure. There is activity, which was intended first and foremost to change the Palestinians’ attitude. That is where most of the efforts have been made, and they have indeed borne fruit. The Palestinians abandoned the preconditions, which resulted in three years of deadlock. They originally demanded a freeze on construction [of settlements] and negotiations based on the 1967 borders, and they were forced to compromise. Regardless of what happens, Israel will come out ahead. If the Palestinians are prepared to make serious concessions, there will be an agreement, and if nothing happens, they will be the ones who turned down peace. That is very important to the world community, but it is no less important to the Israeli public, too.”

Al-Monitor: You are very well-acquainted with the DNA of the Likud and the right wing. From a political perspective, could Netanyahu reach an agreement with the Palestinians?

Hanegbi: “Netanyahu is not facing any political threat. With all due respect to the ideological camp within the Likud, that is nothing new. It was always the case, and it always will be the case. On the other hand, there has not been a situation for decades in which ideological opponents successfully prevented the prime minister from fulfilling a more moderate policy. They did not succeed when late Prime Minister Menachem Begin went to Camp David and the “refuseniks,” including my mother [late Knesset member Geula Cohen], former Defense Minister Moshe Arens and former Prime Minister Ehud Olmert, tried to prevent it. When late Prime Minister Yitzhak Shamir went to the Madrid Conference [1991], the “refuseniks” of that time, including Ariel Sharon, former Foreign Minister David Levy and former Finance Minister Yitzhak Modai — all of them powerful ministers — failed to prevent him from sitting with a joint Jordanian-Palestinian delegation.

“Shamir realized that as far as Israeli interests are concerned, he must adopt a moderate stance. The same thing happened to Sharon during the disengagement from Gaza [2005], and to Netanyahu during the Wye River Accords with Palestinian leader Yasser Arafat [1998]. Political history teaches us that if Netanyahu is persistent, most of the public — both in the Likud and in the country at large — will back him, even if the ideological forces scream bloody murder.”

Al-Monitor: But the Likud of today is much more extreme. The settlers have much greater influence on the party.

Hanegbi: “I don’t think so. The extremists are on the party’s fringes. They have no influence on government policy. After all, Netanyahu did deliver his Bar Ilan speech, and while they may have tried to prevent the freeze — in construction in the settlements — which sent a tremor through the Likud’s voters, they lacked the political strength to actually carry through with it. The most recent example is the decision approved by the government to release Palestinian prisoners [July 2013]. There were people opposed to this, too, but no one was willing to pay the price of resigning from the government or of creating a new political party.”

Al-Monitor: So the coalition will fall apart.

Hanegbi: “Not so fast. It depends on Economy and Trade Minister Naftali Bennett [head of HaBayit HaYehudi]. Bennett takes a very pragmatic approach. What he basically says is that he has no plans to torpedo the negotiations, and if it comes to an agreement, he can seek refuge in a referendum, which would allow everyone to come to terms with the outcome.”

Al-Monitor: Is Netanyahu ready for such a historic step?

Hanegbi: “Netanyahu will not do anything that puts the security of the state at risk. Subject to that headline, he will not reach an agreement that does not include an end to the conflict, or an agreement that divides Jerusalem, or one that abandons the security boundary along the Jordan River or one that makes concessions on the settlement blocs. He certainly will not agree to the return of the refugees. If the Palestinians can live with that, he will show flexibility on all other issues.”

Al-Monitor: You have been very closely involved with the Iranian nuclear issue. Do you think that there is a connection between it and the diplomatic negotiations?

Hanegbi: ''There is no direct connection, but indirectly, any diplomatic move would allow us to be focused on that. Instead of putting down riots in Nablus, the army can prepare itself to deal with the bigger threat.”

Al-Monitor:  The uprisings in the Arab world, including the change of government in Iran in the recent elections, seem to be expressions of a more moderate atmosphere there. Does this have any impact on the progress that could be made in the diplomatic process?

Hanegbi: “I am focused on the Iranian issue and less on Egypt and Syria, because they are involved in their own problems now. We are in no way involved in what is going on there, apart from keeping a close watch on the situation. On the other hand, in the case of Iran, the threat is directly against us. Much to my chagrin, we are seeing the most skeptical predictions coming true as the years pass. I believe that the United States will not take action, that the sanctions are insufficient and that the negotiations with the Iranians are little more than a fig leaf. We are reaching the day when Israel will have to decide whether it will come to terms with a nuclear Iran or if it will investigate options to deal with the threat unilaterally. While I try to be as optimistic as possible, I don’t think that there has been any significant change in Iran since the recent elections there.”